3 Generations on the March: ‘It Felt Like the Passing of the Baton’ 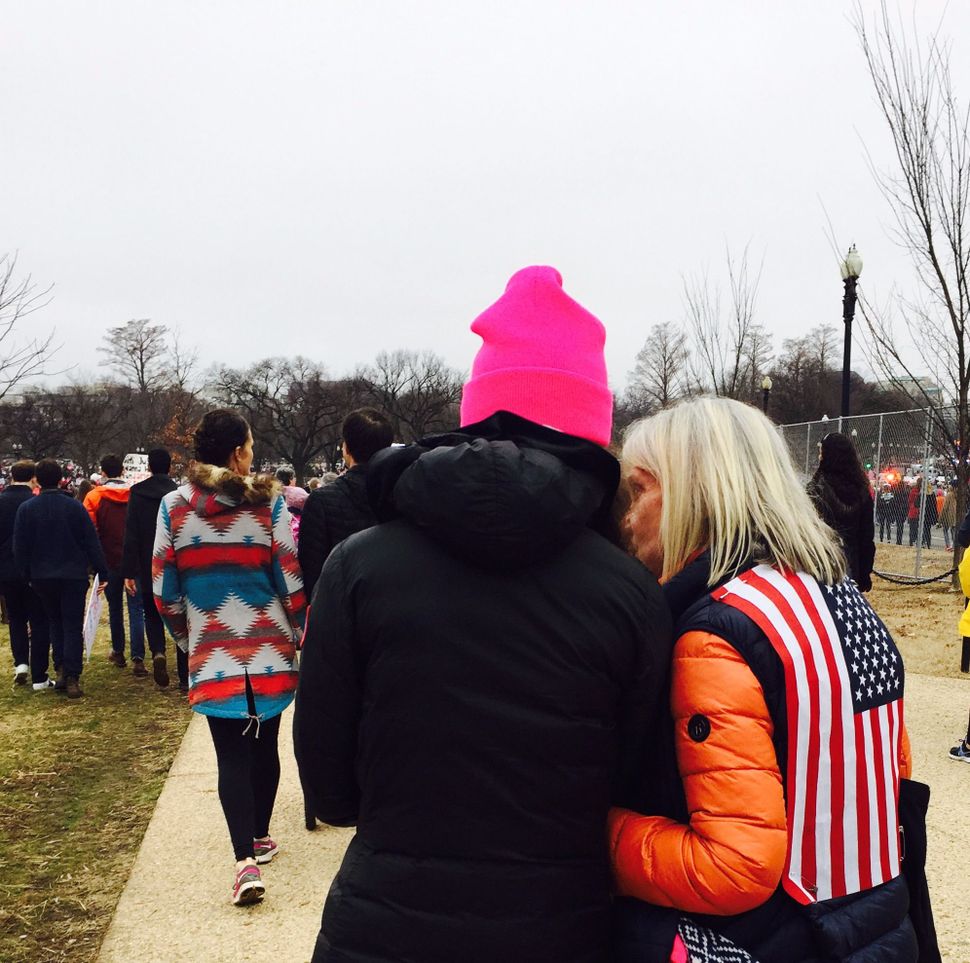 I was moved by the masses, but ambivalent about their message. As my Grandma, Mom and I held onto one another while we wove through the scant empty pockets in the crowd, I listened to chants of “Hands too small, can’t build a wall,” and was reluctant to participate. It felt like “going low” when we’ve prided ourselves on the opposite. I did not march to mock; I was there to send a loud and clear message to the 45th president: I don’t care about the size of your hands or the style of your hair; I am marching for every American who feels unsafe.

For me, the march’s meaning was encapsulated by the pink hats bobbing against the foggy D.C. sky, the unmistakeable feeling of defiance and solidarity in the air, the carefully crafted signs held up by hands of all colors, sizes, ages. But I was most moved because I marched beside my Grandma, whose outrage I felt, but know I cannot fully fathom. Her fear for the country that my generation is inheriting heightened mine; her feeling of discouragement tempered my optimism. But seeing her uplifted by the men and women around us reassured me. Seeing her comforted by the sight of boys and girls on shoulders, and men with signs saying, “This is what a feminist looks like,” buoyed me.

Together, we marveled at the crowds, the clever posters, the warmth of the women around us. Together, we were marching for what she had marched for so many times before — the rights she did not have growing up, the rights she wanted secured for her daughters and her granddaughters, the rights President Trump threatens with every speech he gives and careless tweet he posts.

To me, this march felt like a passing of the baton. We travelled with a cohort of women primarily the age of Grandma and Mom. I know it is not a last hurrah for them; they will keep showing up. But it’s not their battle in the same way that it was before. It’s my turn to march for the rights Grandma fought to make fundamental. I hadn’t felt this sense of responsibility until Saturday. Being young is no excuse for inaction; it may be precisely the reason to act.

I watched Grandma and Mom walk out of Penn Station in New York in front of me at the end of the long day, arms interwoven, over-packed food bags in hand, my Grandma’s American flag still pinned to her vest. Maybe I was just sentimental in the late hour, but the scene felt symbolic.

Molly Shapiro is a senior in high school in Manhattan.

3 Generations on the March: ‘It Felt Like the Passing of the Baton’