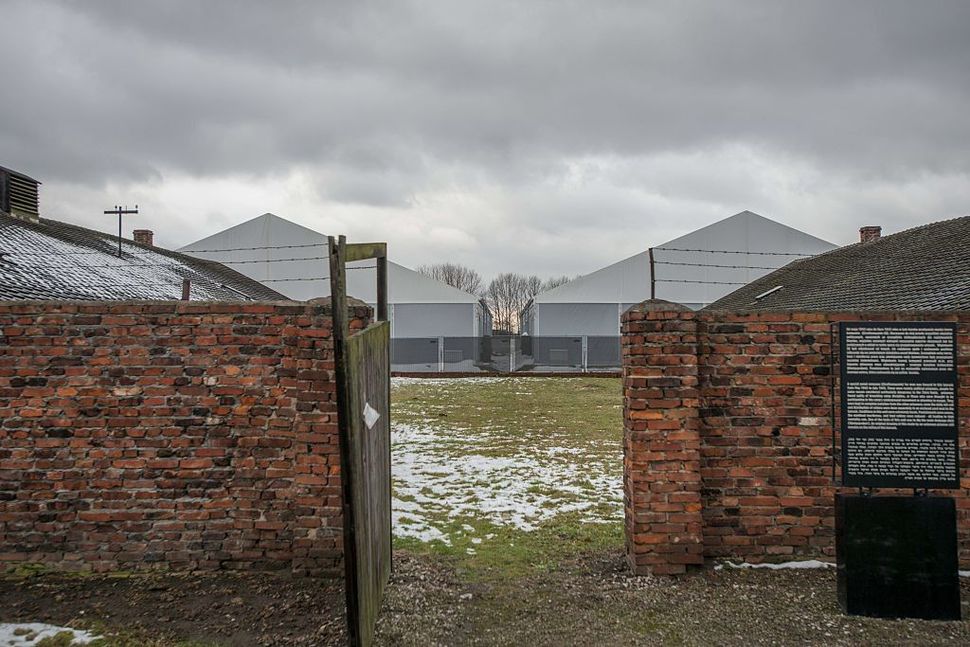 My 2013 edition of Lonely Planet’s “Europe on a Shoestring” ranks Auschwitz third in “Poland Highlights” — trailing behind the gnome statues of the city of Wrocław, but ahead of the city of Gdańsk.

As a Holocaust historian and architectural historian of Auschwitz, I have visited the death camp at least 80 times since my initial research in its archives in the late 1980s, so it would come top of my frequent-destination list, if I cared to keep one. Yet I have difficulties with assigning Auschwitz any rank in any list, except in one that tallies the deadliest places in history. In that list, it is, with 1.1 million victims, number one.

I continue to visit Auschwitz for research purposes, but at times I also accompany university students, academics, and educators. Each group has different expectations, and the visits I plan for them are therefore different in scope and emphasis. Over thirty years I have seen Auschwitz evolve and improve as a professionally run museum that encompasses large grounds, many buildings and ruins, and countless artifacts and archival documents. Yet difficulties remain. These are rooted in the paradox that, unless one goes there as a researcher, we cannot visit Auschwitz but as tourists, while the ethical demand that emerges when we think of “Auschwitz” confounds and confutes the expectations of the “tourist”

In his 1980 classic “Abroad,” literary critic Paul Fussell defined the tourist in relationship to the explorer and the traveler. “All three make journeys, but the explorer seeks the undiscovered, the traveler that which has been explored by the mind working in history, and the tourist that which has been discovered by entrepreneurship and prepared for him by the arts of mass publicity.” Fussell argued that “exploration” offers guaranteed adventure. “Travel” carries the possibility (and perhaps also the hope) of some safe misadventure that generates a good story after one’s return home. “Tourism” guarantees both ease and safety in transport, accommodation, food, and entertainment. Don’t worry, everything will be taken care of.

Most people who choose to visit Auschwitz want to enter as travelers. Yet when they first arrive, they find all the amenities of an ordinary tourist destination: a large parking lot, clean toilets, a cafeteria that serves tasty food, guide services, multi-language information signs, well designed exhibition spaces, and media stores selling books, DVDs, posters, and postcards. The visitors expect these things, but at the same time their presence at Auschwitz is for many a source of bewilderment and irritation.

Sometimes this can lead to disengagement. On one occasion, under the domed roof of the mausoleum that is the second part of the Majdanek memorial, I observed a middle-aged woman engaged in a leisurely phone call while sheltering from the rain. The dome covers a huge circular urn, shaped like a saucer, which contains the ashes of thousands of people murdered at the site. She talked a lot, but when listening, she inhaled smoke from her cigarette, and when she resumed speech, she tapped the cigarette against the edge of the urn, dropping the ashes into, almost unbelievably, the ashes below.

But mostly I have discovered that their confusion offers a teachable moment that focuses not on the need for amenities when you have two million visitors a year, but on their own expectations. They all have “seen” Auschwitz before: through books, movies, TV documentaries and the web — the physical elements of Auschwitz are already familiar to them. And if they are honest with themselves, they will have to admit that the primary expectation of their visit to Auschwitz will be a ticking-off the to-do list prepared in advance — fence, check; guard tower, check; gate, check; suitcase exhibit, check; hair exhibit, check; crematorium, check and selfie taken.

Coming clean about what is on offer at Auschwitz as a destination and about one’s motivations to be there is a first step to make a visit to Auschwitz into more than a tourist trip only. Thorough preparation before the journey also allows participants to transcend the tourist experience: they can read about its history, read survivor memoirs, or watch video testimonies made available by the USC Shoah Foundation.

Participants might adopt a forensic perspective during the visit. Some of the guides of the Auschwitz-Birkenau State Museum have become quite adept at encouraging this: they don’t just recite a canned story of what happened where, but ask the visitors to look carefully at what they see when they walk through the site, and challenge them to recognize in the location or the artifacts the traces of a systematic crime.

Visitors can also study the topography of Auschwitz before their arrival. Most groups first visit the permanent museological exhibition located in the buildings of the so-called “Stammlager” or Auschwitz I — the oldest and smallest part of the Auschwitz concentration camp that contains the gate marked with the words “Arbeit Macht Frei” (“Work Sets You Free”). After visiting this site, many (but not all) groups continue to the much larger site of Auschwitz-Birkenau or Auschwitz II, which was the place where most Jews were sent to either be killed in the gas chambers or be worked to death. Because the visit to Auschwitz I takes around two hours, there are few visitors in Auschwitz II in the morning. So at that time one can be alone there.

Finally, one can subtly, but decisively subvert the expectations of the visitors. Like the “Arbeit Macht Frei” gate in Auschwitz I, the so-called “Gate of Death” that is the primary entrance to Auschwitz II is an item ready to be ticked off. When I take visitors to Auschwitz, I ignore it as an entrance, but exploit the fact that, 100 yards to the south of the gate, a plain iron gate offers entry into the former women’s camp. While the two sides are normally chained together, they leave more than enough space for visitors to slip into the site. The management of the Auschwitz-Birkenau State Museum condones this practice. By taking an alternative route through the former women’s camp visitors will stumble upon the ruins of the most lethal killing installation, Crematorium number 2, without being first distracted by the massive and emphatic memorial created in the 1960s and a lengthy explanation on an informative panel which serves the purpose of information but takes away the surprise.

From Crematorium 2 one can walk to the birch forest with the remains of the gas chambers of Bunker 2, the delousing building with its excellent presentation of pre-war, pre-Holocaust photos of Jewish families who ended up in the camp, Crematorium 4 and 5, to end up in a 800 yards long North-South Lagerstrasse (Camp Street), hemmed in by barbed wire fences, that leads to the Rampe where, in 1944, the selections took place. Walking along that path with, far ahead, a single menacing guard tower, the visitor is exposed to the East and the West to a haunting landscape of chimneys that seem to stab the horizon.

These chimneys are not those of the crematoria — the SS blew those up when they abandoned Auschwitz in January 1945 — but rather the ones for the stoves meant to heat the prefabricated wooden barracks. When after the war these buildings were disassembled to be rebuilt elsewhere the brick chimneys remained in situ, memorials of the barracks that once stood there. In the destroyed cities of post-war Europe, chimneys were often the only part of buildings that remained. German writer Wolfgang Borchert compared them to the fingers of corpses, “clutching at God, threatening heaven. The bare, bony, burnt, bent fingers of corpses.” The metaphor certainly applies to the chimneys in Auschwitz-Birkenau.

When the visitor finally emerges at the place of selection, the space suddenly opens up with, to the right, the ruins of two crematoria and the memorial, and to the left the back of the “Gate of Death.” Standing at a literal and symbolic crossroads, the visitor has arrived the place where, in 1944, the deportees alighted from the cattle cars — hundreds of thousands of people who had the sad fate to be the shipwrecked explorers of a place that should never have existed.

At this site a short explanation of the purpose, practice and meaning of the selection will do, to be followed by an exit through the gate. Taking one’s leave from the memorial grounds in this manner is well understood by survivors: having visited the site so many times in their company, I am always surprised by the way they straighten their backs and speed up their steps when, at the end of a tour, they approach that gate, transforming a “Gate of Death” into a gate that leads back into life.

Yet, in the end, these tricks to make the visit meaningful in a way appropriate not to the homogenized amenities, but to a mass graveyard, work best because of the friction between the trauma of the location and its status as a “tourist attraction.” Auschwitz-Birkenau State Museum is emphatically not a smoothly operating Disneyland, with its seamless transitions from nostalgia to science fiction, made possible by a massive backstage operation. The very lacerations generated by the avalanche of tourists stimulates both reflection and the adoption of an ethical stance vis-à-vis the place, both as the historical site where Germans murdered 1.1 million people — Jews, Poles, Roma and Sinti, Soviet prisoners of war, and others — and as tourist destination. How can this be that place, we are left wondering.

Indeed: having been often a witness to the initial disappointments many had when they saw the crowds upon their arrival at the parking lot, I have never met anyone who, in hindsight, believed that the irritations of the tourism experience at Auschwitz trumped the lasting impact the visit as a key moment in the development of their historical and ethical imagination. We may arrive as tourists at the site of the Auschwitz-Birkenau State Museum, but most of us turn, retroactively, through study and reflection, into Auschwitz travelers. This is the singular, transformative power of a visit to the remains of the most deadly Nazi factory of death, one that remains unbroken in an age of mass tourism.

Robert Jan van Pelt teaches at the School of Architecture of the University of Waterloo, Canada. He has visited Auschwitz since the late 1980s, and he has written extensively on the history of the camp. He is currently involved with the preparation of a large, traveling exhibition on Auschwitz that will open in Madrid in September 2017.