Anti-Semitism had always been a part of German culture before Hitler came to power, my great uncle Ernie Lowenstein told me. But the difference was noticeable as soon as he became chancellor.

You could tell right away, he recalled.

I was visiting Ernie in a retirement facility in Evansville, Indiana in the summer of 1992. He had moved there after a distinguished career as a small-town doctor in Mt. Carmel, Illinois. Ernie went to the same breakfast spot on the town’s main street each morning, soaking in the pleasure of being called “Doc” by patients he had tended to for decades. He had moved to the United States in the late 30s from Essen, where our family had lived for more than 150 years. He was a new doctor, and he left his homeland after the Nazis prohibited Jews from practicing medicine.

Tall and dignified, he always wore a dress shirt and an impeccably knotted tie that gave him a deceptive formality. A gentle kindness radiated out from his core and suffused his entire being. His bushy eyebrows raised whenever he told a joke. He had already told a few during our visit. When I pointed out the hearty enthusiasm with which a pair of female residents had greeted him on the way to the dining hall, Ernie replied, “They are too old to be of interest to me.” His blue eyes danced as he spoke. 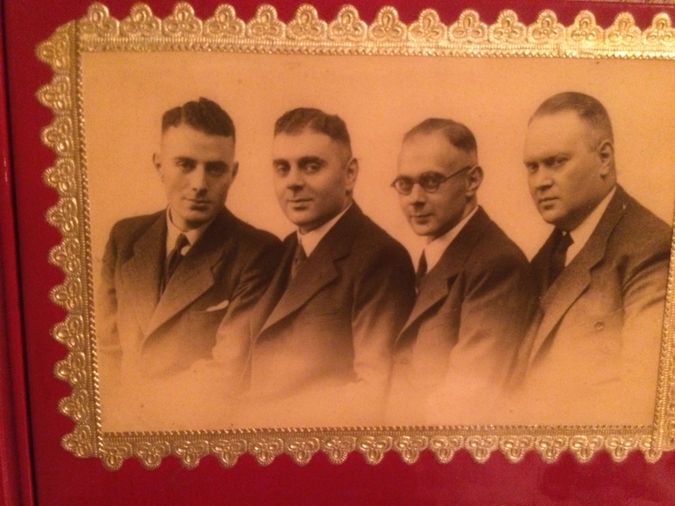 Ernest Lowenstein, far left, pictured in the 1930s with his three brothers.

But his tone grew somber and his shoulders drooped when he described the dramatic uptick in anti-Semitic sentiment and action that followed Hitler’s ascent and the implementation of a series of anti-Jewish decrees. After he finished talking, he stared ahead in silence.

I thought of Ernie’s words this past week after I covered the inaugural ceremony during which Trump took the oath of office administered by Chief Justice John Roberts and then delivered a fiery address. Hearing what he had to say that day left me with the conclusion that everything is on the table.

By that I don’t just mean the systematic demolition of former President Barack Obama’s accomplishments. I am talking about America’s role as a engaged leader in the world community, and, according to some, the democratic fabric and character of our society itself.

A week later, that foreboding sense I carried from the inauguration is only stronger. I want to be clear that I am not comparing Trump to Hitler or claiming that we are in the early days of Nazi Germany. Our democratic traditions are far more entrenched than those of Weimar Germany, such that the two situations are entirely separate. While containing many elements of hatred, Trump’s ideology is not based on a stated goal of the elimination of an entire people from public life as a first step toward their eventual extermination.

I am saying, however, that the speed, manner and substance of how Trump has governed during his first days in office has heralded a new and markedly different era.

Thus far Trump has largely governed by executive memo and orders, signing a record 14 in his first week. The decrees he’s issued have covered everything from starting to build a 1,000-mile wall on the U.S./Mexico border, stripping “sanctuary cities” of federal funding and banning travelers, including green card holders and refugees, from seven predominantly Muslim nations. On Monday night, he fired then-Acting Attorney General Sally Yates after she wrote Justice Department lawyers that she was “not convinced” that the travel ban is lawful.

Trump’s actions are noteworthy not just because of their number, but because of their impact. Whereas previous presidents often have signed symbolic measures among their initial orders, Trump has waded into some of the most controversial issues facing our nation.

His stances must be viewed in the context of his “running war” with the media. In an interview with The New York Times, White House Counselor Steve Bannon labeled media as the opposition party, warning that it should “keep its mouth shut up and just listen for a while.” On Saturday, Trump promoted Bannon, the former manager of Breitbart News, handing him a seat on the National Security Council that advises the president on national security and foreign affairs.

Trump and Bannon’s statements come after the president upbraided the National Park Service’s director for retweeting side–by-side photos of the small crowd that attended his inauguration and the much bigger audience that watched Barack Obama become president eight years earlier. They come after the president said torture “works” during an interview with ABC News’ David Muir. And they come after Trump’s promise of a “major investigation” in what he has said was massive voter fraud that cost him the popular vote against Democratic opponent Hillary Clinton in the November election.

Even Republican leaders found scant evidence to back Trump’s statements. But the same leaders who routinely criticized Obama as an “emperor” stayed silent about Trump’s executive overreach. Indeed, Senate Majority Leader Mitch McConnell and House Speaker Paul Ryan said they would find funding for the border wall, which they estimated to cost between $12 billion and $15 billion. Others have put the cost higher.

Taken together, the administration’s actions are an assault on many of the collective values that have been an integral part of our nation’s history, an attack on truth and a staunch challenge to the First Amendment.

Americans of various political stripes will make different sense of these developments. Trump’s supporters are likely to view them as a welcome change from what the dark years of the Obama administration and the beginning of a fresh, take-charge approach. His opponents are likely to interpret the last week or so as our nation’s rapid move in an ominous direction. For my part, I’m thinking about the words my late uncle shared with me in his final years more than two decades ago, and I’m agreeing with his point of the importance of recognizing that, just like German citizens in early 1933, we are living in a starkly different reality than we were a mere 10 days ago.

Jeff Kelly Lowenstein is an investigative journalist and visiting professor at Columbia University’s Graduate School of Journalism. A Fulbright Scholar, Specialist and Teacher, he has written four books, including “The Chilean Chronicles: Moments and Memory Forty Years After The Pinochet Coup.”