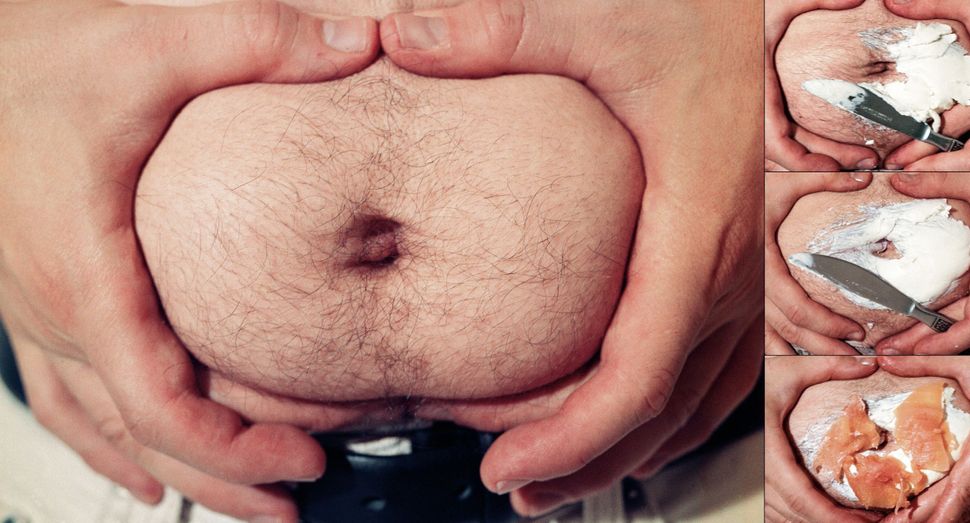 “Bagel Belly,” courtesy of the artist. Image by Jeffu Warmouth

The rise of Donald Trump has unleashed racial animosity that makes the Willie Horton episode of the 1988 presidential campaign seem like an ABC Afterschool Special.

The widespread scapegoating, which Trump sanctions with a nod and a wink (as well as an appointment of certain senior counselor portrayed by the grim reaper on “Saturday Night Live”) has also unleashed a virulent and viral anti-Semitism.

Given these dark days, it is critical to recall the role Jewish humor plays as a coping mechanism to such affronts, something evidenced by a 2013 Pew Research Center survey designed to divine what it means to be Jewish in the United States. To borrow from Larry David, Jewish humor fared “pretty, pretty good.” It did not rank as important as the super-serious stuff, such as “remembering the Holocaust” or “leading an ethical life,” but still placed sixth at 42%, just one percentage point behind the “caring about Israel” category. Not too shabby.

But while you likely know about any number of Semitic stand-ups and comedy writers, photography has also produced its share of Jewish visual humorists.

To focus on just one musing about this subject by a photographer who began working soon after the Holocaust, consider William Klein’s appraisal of his own photography. “I have this sense,” he wrote, “of tragic absurdity with a sort of black Jewish humor mixed with my own graphic sense.” Klein’s reference to “black Jewish humor” highlights the attitude of laughter through tears that has been a hallmark for understanding Jewish humor in the face of persecution and suffering.

In a 1937 photograph by the New York crime photographer and rabbi’s son Ascher Fellig, aka Weegee, we encounter someone who shared Klein’s morbid humor. Indeed, it became Weegee’s means to deal with the nightly evidence of death on his gruesome beat. One sees the ironic interplay of text and image in “Simply Add Boiling Water,” where Weegee manages to put out a deadly fire with a spritz and a blast of laughter. 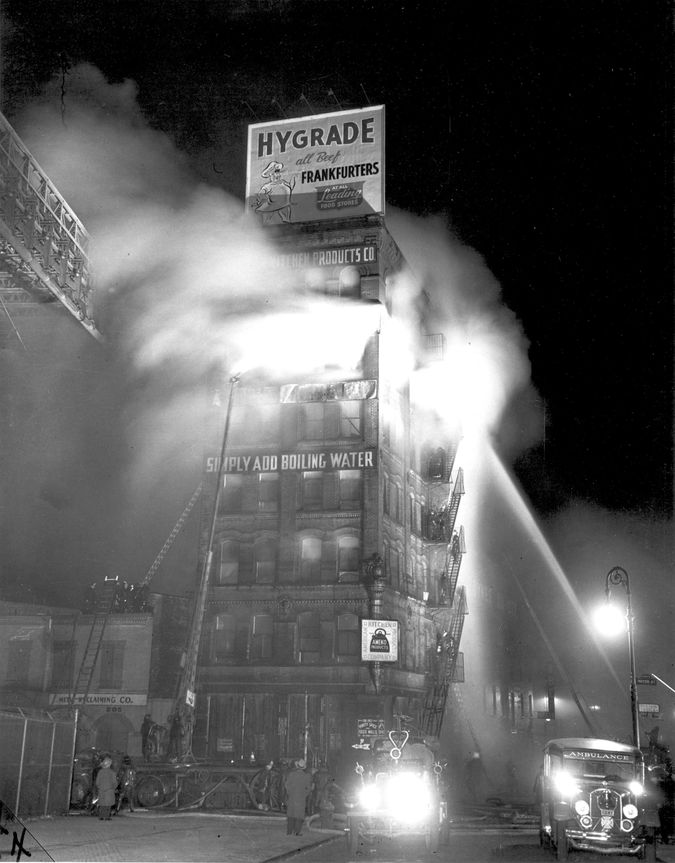 So we might say that there is a desperate Jewish need for levity — especially in times of tsoris — and that this is exactly the type of uplift that photographic humor can provide figuratively and literally. In “Dali Atomicus,”(1948) the Latvian-born Jewish photographer Philippe Halsman staged the derangement of reality with his surrealist collaborator, Salvador Dali, playing the mad artist in mid-leap in front of his levitating easel. In this pre-retouched version, one gets to look behind the scenes at the special effects necessary to stage the crazed scene. 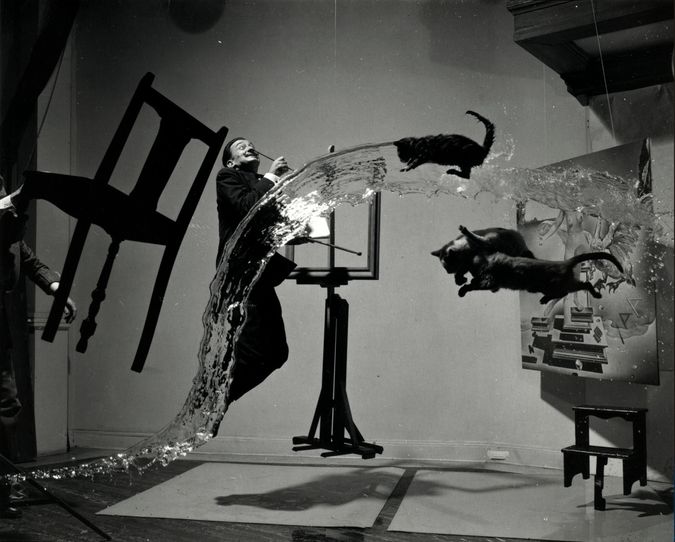 Jeffu Warmouth’s grotesquely delectable “Bagel Belly,” below, also addresses the close linkage of Jewish identity and humor. Here, the photo artist has some fun with one of the culture’s gastronomic icons. There is also a good dose of self-mockery in “Bagel Belly,” as we see the artist making fun of his own protruding paunch. Nevertheless, this decidedly Jewish humor is taken for a twist when we learn that the artist is not actually Jewish. Instead, he is a practicing Jewish humorist — that is someone who has soaked up this quality that binds American Jewish identity and who has done so from the “outside in.” 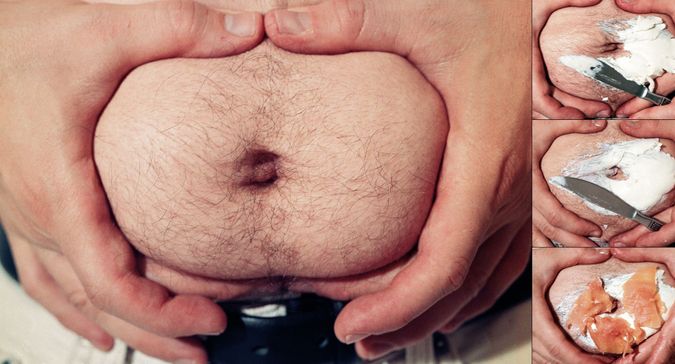 “Bagel Belly,” courtesy of the artist. Image by Jeffu Warmouth

Finally, Melissa Shiff’s self-portrait,“Leaving the Ararat Virtual Synagogue” (2013), is a screenshot taken with a smartphone from her Mapping Ararat project. Mapping Ararat imagines what would have happened if diplomat and utopian writer Mordecai Manuel Noah’s plan to turn Grand Island in upstate New York into a “city of refuge” for the Jews had proved successful. Using GPS coordinates, this hilarious superimposition situates the virtual synagogue on the 18th green of a golf course so that visitors to this “holy site” need to be wary of flying golf balls in a surrealist flight of the imagination that messes with the identity of the place. 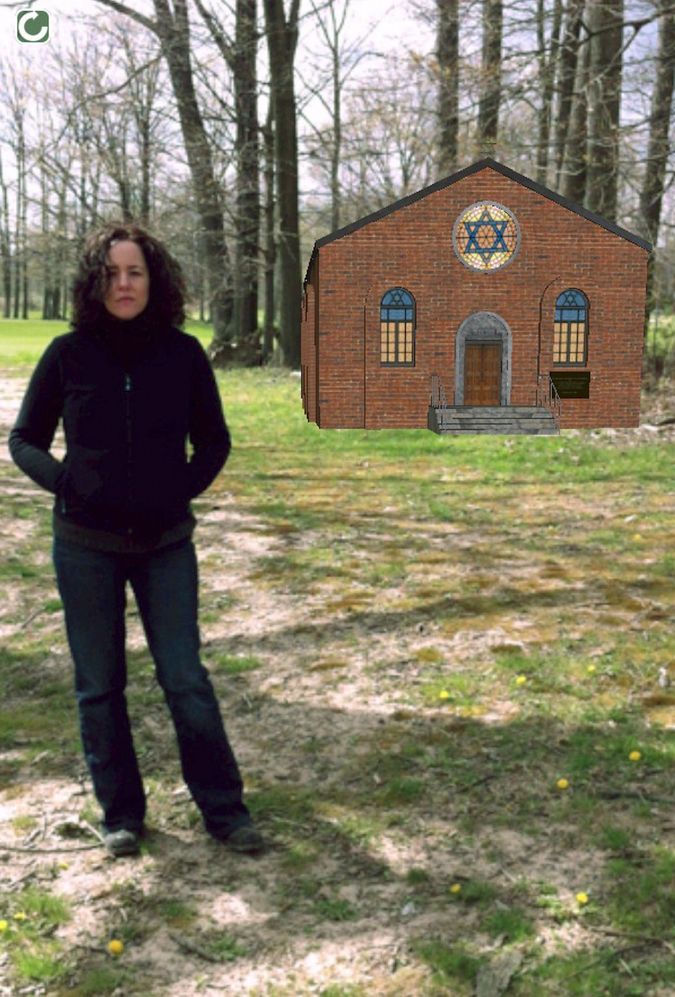 Sigmund Freud told us that dreams and jokes have a lot in common and that they operate according to the logic of displacement. In Shiff’s photographic mirage, one dreams of Ararat as a Jewish utopia existing beyond the troubled state of the union until one puts down the phone to realize in a Jewish comic deflation that nothing was really there.

Louis Kaplan is professor of history and theory of photography and new media at the University of Toronto. His new book, “Photography and Humor,” was published last December by Reaktion Books. A book signing event will be held at the International Center of Photography at 250 Bowery on February 16th at 6:30 pm. For more information, click here.