Criminal Intent: Why This Rabbi Went To Jail To Protest Trump 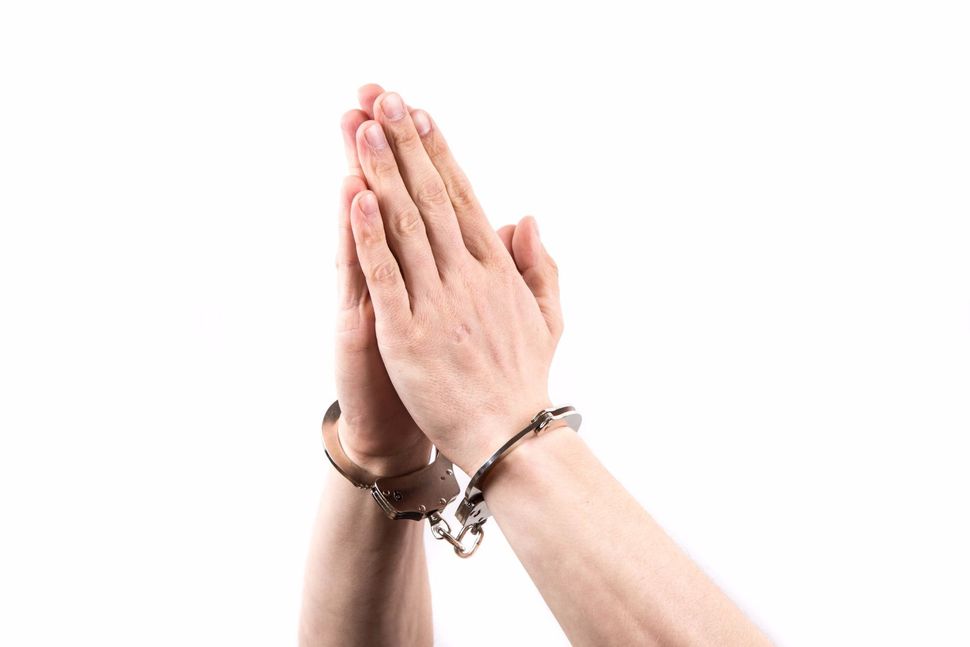 On Feb. 6, I was one of 19 rabbis to go to prison to protest the Trump administration’s recent restrictions on immigration and the acceptance of refugees. Organized by T’ruah: the Rabbinic Call for Human Rights, we were the largest group of rabbis to be arrested at one time in American history.

Like many American Jews, I see this as a critical moment to stand up against the racism, xenophobia and religious bigotry of Trump’s policies. Also like many American Jews, I was raised with a collective memory that celebrates America for welcoming our ancestors as refugees, and expresses disappointment and shame for the times when America failed and continues to fail to do so. I was raised in a tradition that teaches us to welcome the outsider, and I was moved to act with a sense of dread about the future of my country and the ongoing fate of some of the world’s most vulnerable people.

So I marched on the night of Feb. 6th with hundreds of protesters down Broadway in Manhattan, past shoppers in stores and newspaper stands, finding spontaneous allies who joined us along the way. At the end of the march, with prior coordination with the New York City Police Department, and training from the T’ruah staff, my colleagues and I sat in the middle of the street in front of the Trump Hotel in Columbus Circle, committing a misdemeanor offense of disorderly conduct. The police put us in plastic cuffs and took us to the 33rd Precinct in Washington Heights by bus. After a few hours in the precinct lock-up, we were released with a summons to appear in court.

I have never been arrested before, either for protesting or for any other reason, but I knew from the prior experience of several colleagues in such situations that the police would treat us courteously, and indeed they did. As they put on the handcuffs, I felt grateful to live in a city where the police department, for all its faults, could make it possible for us to act on our constitutional rights to protest unjust laws. On the police bus to the precinct, we sang and shared words of Torah. My own thoughts turned to Nachshon, the leader of the tribe of Judah who jumped into the waters of the Sea of Reeds before the sea actually split. He went into the water, I said that night, because there was no other way to freedom. MAke no mistake, a few hours in prison does not make me a Nachshon; it was just a small step I took with the knowledge that we may need to go further. But I also thought about the tens of thousands of refugees, some of whom literally set out to sea because they really have no way to freedom.

How could I stand idly by while our country refuses to provide them with refuge?

We specifically did this as rabbis, some of us wearing talitot, prayer shawls that symbolize our commitment to the commandments. While I am no holier than my fellow citizens or fellow Jews, I believe it is important for rabbis to be a visible presence in Jewish and interfaith demonstrations against unjust policies.

In his great code of Jewish law, the acclaimed 12th century rabbi Maimonides explains that when teachers of Torah fail to act with the highest level of moral integrity or kindness, they desecrate God’s name. Likewise, teachers of Torah who exhibit the virtues of justice and kindness beyond the requirements of the law sanctify and magnify God’s name in the world. I am guided by this wisdom: those who make Torah their vocation become the living embodiment of its teachings. For so many Jews, it really matters when they see their rabbi standing up for justice. And when rabbis fail to speak out, those same people feel that Torah, Judaism and even God have failed them. For the sake of the Torah’s commandments to love the outsider, the foreigner or the refugee, I could not be silent.

Rabbi Bill Plevan holds a PhD in Religion from Princeton University and teaches modern Jewish thought at Hebrew Union College and the Jewish Theological Seminary. He previously served as rabbi of Congregation Shaare Zedek on Manhattan’s West Side. He is working on a book about the Jewish philosophy of Martin Buber.

Criminal Intent: Why This Rabbi Went To Jail To Protest Trump