Unreality Show: Netanyahu And Trump Struggle With The Truth 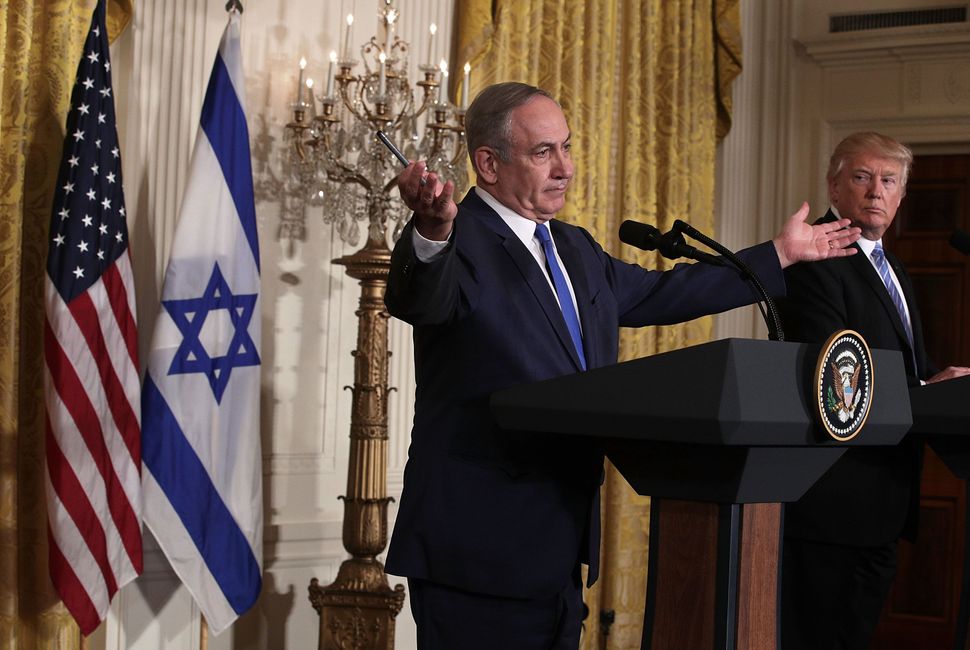 At a White House press conference yesterday, President Trump had the opportunity to lend his administration’s support to decades of American foreign policy in favor of a two-state solution to the Israeli-Palestinian conflict. He didn’t.

Israeli Prime Minister Benjamin Netanyahu, standing next to him, could have expressed his sympathy to American Jews experiencing heightened anti-Semitism at home and increasing unease that Israel is moving away from its core democratic values. He didn’t.

The alternative universe has arrived.

In this universe, evasions are commonplace, lies pass for honesty, promises are erased, protocol is forgotten, history is rewritten and long-standing allies are cast aside. It’s amazing how much damage can be done in less than an hour.

The change-up began at the start, when the two heads of state decided to hold their first joint press conference before they even officially sat down to talk. This does not usually happen at the White House, and there’s a reason for this protocol — so that the president and his counterpart can report on what they actually might have accomplished.

But neither Trump nor Netanyahu evidently wanted to be questioned that way, so the schedule was reversed, allowing for public bonhomie without any opportunity for follow-up.

Nonetheless, Trump, true to form, made headlines with his stunning remark that discarded decades of diplomatic understanding. “I’m looking at two states and one state. I like the one that both parties like. I can live with either one,” he said, almost casually, in answer to a question from an Israeli journalist. (And thank goodness for the Israeli journalists, who asked pointed questions of the two leaders, as opposed to the hand-picked Americans, drawn from right-wing news outlets guaranteed not to pose challenging questions.)

All Trump wants to do is make a deal — a “better deal than people in this room understand.” He provided no hint of how his administration, plagued with unprecedented dysfunction in just its first few weeks, can achieve such a deal.

Netanyahu grabbed the opening and pounced. What does a two-state agreement mean, anyway? “Are we talking about Costa Rica or another Iran?” he asked at one point. “Rather than deal with labels, I hope to deal with substance.”

For him, the substance begins with two prerequisites for negotiations: Palestinians must recognize Israel as a Jewish state and must agree that Israel will retain overall security control over the west side of the Jordan River. These two conditions, he asserted, haven’t changed. He’s been saying this for years.

Netanyahu has said again and again, for years, that he would sit down for “negotiations without preconditions.” Now, evidently, there are preconditions. Second, in his landmark 2009 speech at Bar-Ilan University, in which he tepidly endorsed a Palestinian state for the first time, he said the state must be demilitarized. Now he’s insisting that Israel maintain full security control over land relinquished to the Palestinians for a state.

He’s obviously been hanging around his “good friend” Donald Trump a lot lately, and picking up his propensity to revise history and ignore facts.

Of course, Trump himself has changed course repeatedly on core issues regarding Israel. He once promised in front of the American Israel Public Affairs Committee that there would be “no daylight” between his administration and Netanyahu’s over whether Israel can continue to build settlements in the occupied territories. At the press conference, he said instead that he’d like to see Israel “hold back” on further building, not bothering to explain what that actually means.

Trump also promised to move the American Embassy to Jerusalem from Tel Aviv “on day one.” Now he is looking at it “with great care.”

I supposed we can be reassured that Trump is rethinking some of his most dangerous assertions, or listening to the few cool heads in the White House. The problem is, his blithe turnabouts sow uncertainty and create a vacuum that can easily be filled with more outlandish (or cynical) bluster.

What I found even more dispiriting about the joint press conference was Netanyahu’s tone deafness to the American Jews he purports to represent every time he calls himself the leader of the Jewish people.

He cozies up to a president who has instigated some of the cruelest immigration policies in generations, which have been denounced by virtually every American Jewish organization and are the focus of continued public demonstrations led by brave and impassioned Jews.

He doesn’t seem to understand that his sweeping denunciations and negative characterizations of Palestinians are becoming less and less believable now that the occupation is entering its 50th year. Netanyahu didn’t mention Palestinians once during his prepared remarks, and, when pressed, only criticized and derided them. In a Trump-like move, he offered a simplistic assessment of the complicated Palestinian-Israeli conflict, blaming “the persistent Palestinian refusal to recognize the Jewish state in any boundary” as the main “reason we don’t have peace.” Settlements? What settlements?

And when asked about the documented increase in anti-Semitism in America, Netanyahu allowed Trump to deny any culpability — he has a Jewish daughter, after all — and refused to condemn it himself. Worse, after declaring, “There is no greater supporter of the Jewish people” than Donald Trump, he demanded, “We should put that to rest.”

Trump has little support from American Jews as it is: Three-quarters voted against him, and his plummeting approval ratings surely have caused further erosion. By aligning himself so gleefully with this deeply problematic president, by blithely ignoring the real concerns of many of his American Jewish allies, Netanyahu is falling right into that alternative universe where no good can come at all.

Unreality Show: Netanyahu And Trump Struggle With The Truth