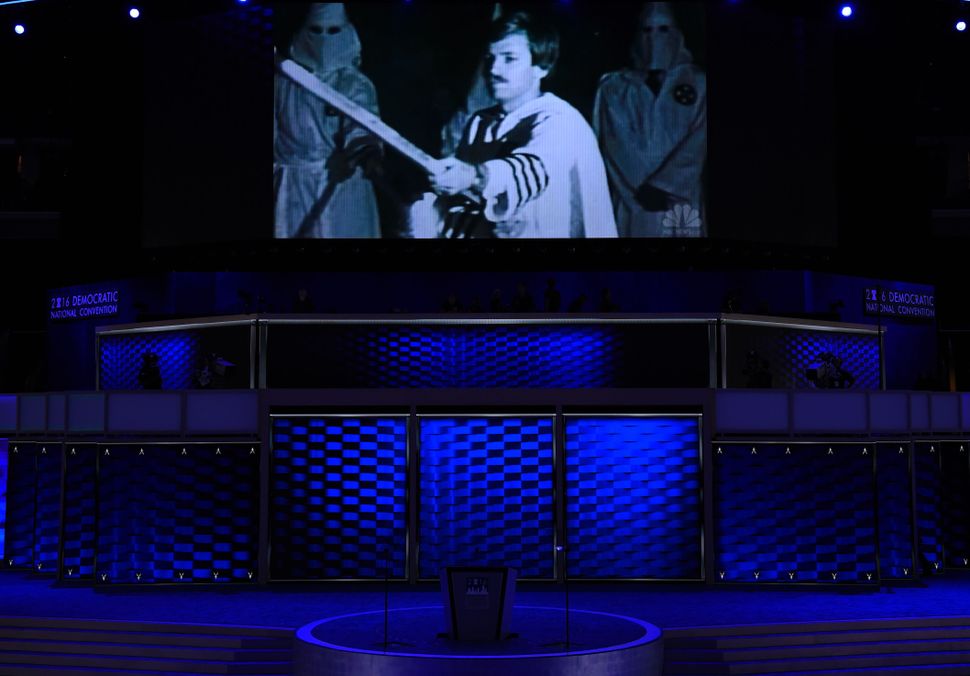 What was noteworthy about Prime Minister Benjamin Netanyahu’s recent summit with President Trump was that the leaders’ press conference had little to do with Israel. An Israeli reporter asked Trump the following question: “Mr. President, since your election campaign and even after your victory, we’ve seen a sharp rise in anti-Semitic incidents across the United States, and I wonder what you would say to those among the Jewish community in the States and in Israel and maybe around the world who believe and feel that your administration is playing with xenophobia and maybe racist tones.”

It’s a fair question, given the recent rise of anti-Semitic incidents. David Duke tweeted on inauguration day, “We did it!” We can recall that when Trump was initially questioned about Duke’s support during his campaign, he claimed he didn’t know who he was. Under pressure, he denounced him. Richard Spencer and his white nationalist movement has also gained in popularity, as has Alex Jones’s “Infowars” radio show, a favorite of Jew haters. Trump could have easily hit the softball out of the park. He could have declared, “Anti-semitism is wrong and will not be tolerated as long as I am president.” Nothing more was needed.

But Trump instead gave a meandering answer that talked about his electoral victory, “simmering racism,” our “very divided nation” and finally his Jewish daughter, son-in-law and grandchildren. He ended by saying, “You’re going to see a whole lotta love,” without referring to the source of the love or where it would be directed. He then mentioned how much he loved Israel. He never uttered the word “anti-Semitism.” Instead, he pivoted when a pivot should have been unnecessary. Let’s deconstruct the president’s response.

Third: “I love Israel” served as his proof that he was not anti-Semitic.

Trump never answered the question, taking cover in the fact that he had Jewish relatives, and he conflated Jews and Israel, or deflected any accusation of anti-Semitism with his love of Israel. I am not accusing Trump of being an anti-Semite. I do not think that he is. In terms of others in his close circle, I cannot say. While the editor of The Breitbart Report, Steve Bannon, certainly published articles which espoused views very close to anti-Semitism, I don’t know his personal views. But that is not the right question. The right question in my view is why Trump would not give the obvious answer. And by extension why the White House intentionally removed “Jews” from a State Department draft of the White House statement honoring Holocaust Remembrance Day. I think we need to keep in mind Deborah Lipstadt’s observation that the absence of any mention of Jews in a Holocaust memorial document is a kind of “soft core Holocaust denial.” Both of these phenomena are linked.

But Trump’s simple unwillingness to mention the word or to answer the question raises profound concerns and should not be discarded as inconsequential.

On the “love of Israel” as a cover for the question of anti-Semitism; the conflation of Jews and Israel is something used equally by the pro-Israelists and anti-Semites. In this case, by conflating love of a nation-state with accusations of targeting a people, almost half of whom do not live in that nation-state, Trump deftly played both sides against the other. In fact, Netanyahu seemed to be perfectly pleased with that response. And so were many the white nationalists. Right-wing anti-Semites often use the inflated influence of Israel in American politics as fodder for their cause. I personally do not think John Mearsheimer and Stephen Walt’s “The Israel Lobby” was anti-Semitic, but Jewish leaders such as ADL leader Abe Foxman certainly did (see his response, “The Deadliest Lies: The Israel Lobby and the Myth of Jewish Control”).

This brings up an important issue. We as American Jews need to get our collective head around the notion that someone can be both an anti-Semite, or enable anti-Semitism, and be pro-Israel. White nationalist Richard Spencer is a perfect example. He loves Israel, he has said so many times. In fact he said that he wants to create in America what Jews have created in Israel – an ethno-national state. The voices against anti-Israel, anti-Semitism on the left (which certainly exists in some cases) has effaced the tried-and-true anti-Semitism on the right. Why? Because the leftist anti-Semites are anti-Israel and many rightist anti-Semites are pro-Israel. One’s attitude toward Israel, and not the Jews, has become the standard by which anti-Semitism is evaluated.

The fact that Trump refused to answer a reasonable question squares nicely with the White House’s removal of the word “Jews” from the U.S. State Department’s draft of the Holocaust Remembrance Day document. Anti-Semites have long wanted to “universalize” the Holocaust, which is what the White House statement actually did.

For proof of this read Richard Spencer’s response to protest about the statement in his January 29th article “Because Hitler…” in ALTRIGHT.com. “Trump’s statement on Holocaust Memorial Day is,” Spencer wrote, “on the surface, utterly defensible within the current moral paradigm: Hitler is depicted as quintessential evil, with modern society revolving around this dark center. But when viewed from the perspective of Jewish activists, Trump’s statement becomes outrageous, as it dethrones Jews from a special position in the universe.”

In this sense, Trump’s response to the question about anti-Semitism and the Holocaust was brilliant, and tragic, in that he satisfied Netanyahu while appeasing the anti-Semites with the exact same words.

There have likely been numerous presidents in my lifetime who probably have personally held more problematic views toward Jews than Donald Trump (Richard Nixon for one). But the president’s choice to keep his constituency in balance by refusing to say what should be obvious should be of concern for all who care about this issue. In this instance, it is not what the president says, it is what he doesn’t say.

In four years Trump will likely be gone, just about the time the anti-Semitism on the right germinating through the president’s silence should be breaking ground.

Shaul Magid is the Jay and Jeanie Schottenstein Professor of Jewish Studies at Indiana University, Kogod Senior Research Fellow at the Shalom Hartman Institute of North America, and rabbi of the Fire Island Synagogue in Sea View, New York.