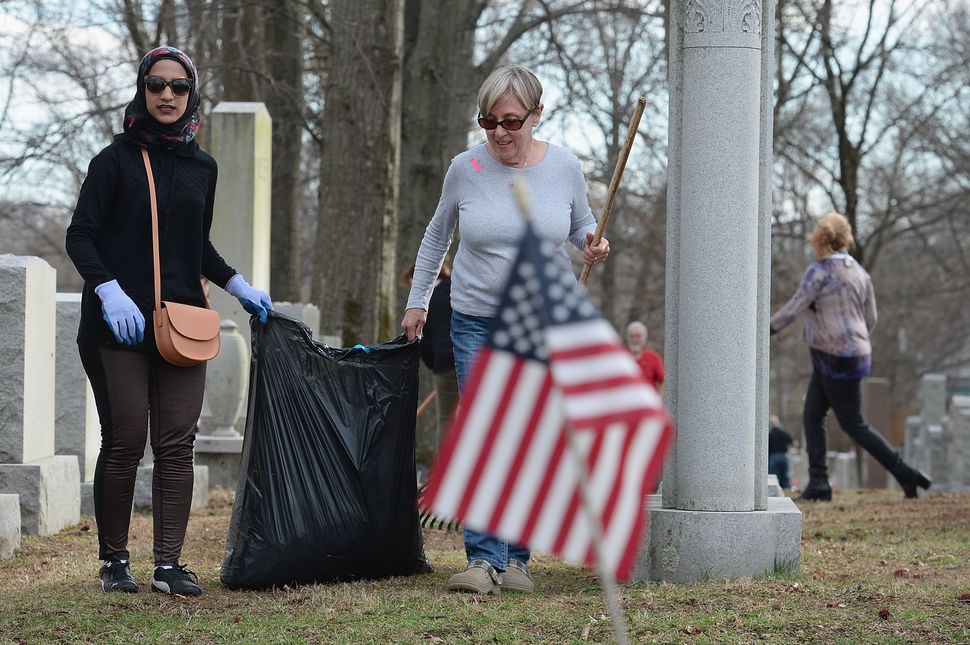 Thousands of Muslims recently donated more than $120,000 to help support the cleanup and restoration of hundreds of desecrated graves at the Chessed Shel Emeth cemetery in St. Louis. This grassroots effort came soon after an outpouring of American Jewish support for Muslims in the aftermath of President Trump’s recently issued Executive Order directing Federal agencies to deny entry into the United States to foreign nationals from seven Muslim-majority countries. In addition to the noticeable presence of kippah-wearing Jews at numerous protests held at airports across the country, organizations representing the spectrum of American Jewry have voiced support for American Muslims, many of whom feel increasingly isolated and unfairly targeted.

Expressions of support for American Muslims may be a natural course for those Jews who oppose the Trump administration, as well as for Jews broadly engaged in interfaith dialogue and social justice projects. However, solidarity with the Muslim community is less obviously worthwhile and far less likely to be found among more traditionally conservative sectors of American Jewry. In the Orthodox community, in particular, Jews’ strong commitments to Israel, Republican political leanings and a tendency to focus on our own parochial concerns make alliances with American Muslims less obviously advantageous or desirable.

It would be a serious mistake, however, for American Orthodox Jews to avoid building ties with Muslims. Minority groups with specific interests are at a critical political disadvantage unless they can successfully create alliances with other groups with similar interests and together work to achieve common aims. Orthodox Jews share many common concerns in American public policy, law, and life with counterparts in the Muslim community.

One important area for cooperation lies in protecting the freedom to practice our respective religions. For decades, American law and policy has been moving away from traditional religious foundations and towards expressions of more secular values. This shift raises some serious long-term challenges. Laws focusing on secular policy objectives that also burden individual religious practices and preferences are likely going to become more common. We have seen this shift occur in Europe, where several countries have passed laws restricting ritual animal slaughter, certain modes of religious dress, and the freedom of some groups to opt out of mixed-gender swimming and hand-shaking in public schools. The ultimately unrealized attempt to legally ban circumcision in San Francisco is an example of this trend beginning to emerge in the United States. We cannot be assured that such rules would be struck down by the courts, and the principle battleground over these concerns is therefore in the realm of legislative policy. As adherents of law-centered religions, both Jews and Muslims share common cause in promoting robust freedoms for religious practice in this country, and stand a better chance of protecting their respective concerns if they work together.

American Jews and Muslims share numerous other concerns in domestic policy. Members of both communities have an interest in securing government funding for their private religious schools to mitigate tuition burdens. Both communities face issues of religious discrimination in the workplace; seek religious accommodations in university settings in matters like class and test scheduling and kosher and halal dining options; and have concerns for the rights of Jewish and Muslim prisoners seeking to observe their respective faiths. Likewise, both Jews and Muslims seeking to abide by religious law have been affected by the passage of so-called “anti-Shari’ah” laws in several states, which hamper the ability of individuals to effectively resolve private disputes through voluntary religious arbitration. Moreover, both Jewish and Muslim communities have faced challenges as they seek to establish themselves in largely non-Jewish or non-Muslim neighborhoods. To grow, both Jewish and Muslim communities need to build religious institutions and infrastructure such as synagogues and mosques, schools, community centers, cemeteries, mikvehs (ritual baths).

The Orthodox community is, of course, familiar with how local governments deploy zoning and land-use ordinances to prevent the construction of important communal infrastructure and stymie development. Recent controversies in places like Monsey, New York, the Hamptons and Maryland offer just a few such examples. Muslim communities across the United States, including Virginia, have faced similar obstacles, as local zoning boards have refused to grant variances for religious uses, often on flimsy pretextual concerns for increased traffic and the “character of the neighborhood.” What is really at play is religious discrimination.
Victories by religious minorities over such conduct anywhere are good for religious minorities everywhere.

Of course, observant Jews and Muslims in America do not agree on all issues. Aside from the very obvious divides over Israel/Palestine issues, members of these groups may have substantial disagreements over the most effective ways to combat Islamic terrorism, address domestic social welfare concerns and any number of other issues. Many in these communities also view each other with apprehension and suspicion. Some of these challenges can be overcome through interaction and education. Others, frankly, cannot; the interests simply do not align. But we do not need to agree with others on all things in order to work with them on those concerns that we do share. There is much precedent for Orthodox Jews looking beyond their own communities to build alliances with other groups based on shared concerns. Many in the Orthodox community were vocal supporters of the civil rights movement. While there are important differences between the Jewish and African-American communities, both groups share a strong interest in seeing a less discriminatory, more equality-oriented society with the kinds of legal protections that would help both Jews and African-Americans gain access to universities, professions, and opportunities for social advancement.

More recently, American and Israeli Jews have developed strong ties to the Evangelical Christian community based on common interests in providing financial, political, and public relations support for Israel.

If responses to the recent Muslim-run campaign to raise money for the vandalized St. Louis Jewish cemetery is any indication, many Jews are skeptical about cooperation between Jews and Muslims. Some do not fully trust the motives and reliability of Muslim Americans seeking to build relationships with the Jewish community. They view Muslim overtures towards Jews as hollow publicity stunts at best, or as more sinister means of driving a wedge between American Jews and their support for Israel.

My own experiences speaking, teaching, and working with members and leaders in Muslim communities around the U.S. tells me otherwise. Time and again, Muslims have expressed sincere interest in partnering with American Jews and Jewish communities. They recognize that Jews have made it in America; in part thanks to our long experience of living as a diaspora minority, we have developed a variety of successful models for how to be both sincerely Jewish and genuinely American.

American Muslims are grappling with similar issues related to the negotiation of dual identity, and many are eager to learn. Many Muslims also appreciate that they are a relatively new, vulnerable, and often disfavored minority. They are eager to build alliances and friendships with other groups, especially groups – like Jews – that have faced similar challenges and with whom they share similar religio-legal outlooks and lifestyles.

Many American Muslims are ready and eager to work together with American Jewish communities, and we should take advantage of this opportunity.

Rabbi Dr. Shlomo C. Pill is an attorney, and a Senior Fellow at the Center for the Study of Law and Religion at Emory University, where his research focuses on intersections between Jewish, Islamic, and American law. He is also the Director of The Institute for Jewish Muslim Action, an organization building productive working relationships between American Jews and Muslims through educational programming, policy research and consulting, and legal and political advocacy. He can be reached at [email protected]