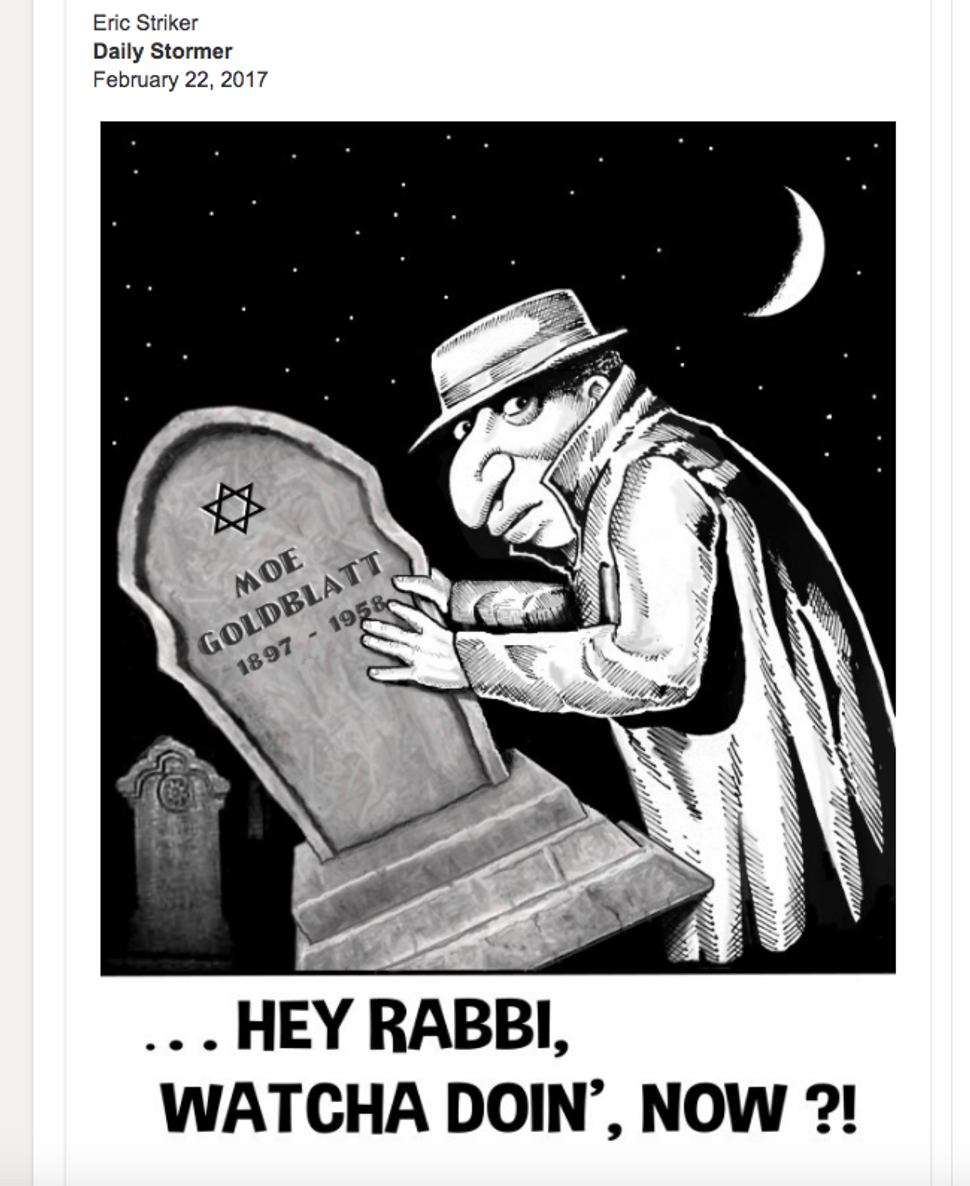 After vandals knocked over or damaged dozens of tombstones in a Jewish cemetery in Missouri, neo-Nazis say the incident is a “non-story” used as a bludgeon to attack President Trump, fitting what they view as a pattern of nefarious Jewish control of media and politics.

“It’s obvious that this isn’t about some 100 year old gravestones being tipped over,” wrote Daily Stormer contributor Eric Striker. “This is about bending Trump to the Jewish will through media onslaught.”

The Daily Stormer was founded in 2013 by Andrew Anglin and draws its name from the Nazi tabloid Der Sturmer. The Southern Poverty Law Center recently named it the country’s “top hate site” in page views and influence in extremist circles.

The cemetery defacement followed a rash of bomb threats to Jewish Community Centers across the country, leading Jewish leaders and communal figures to demand Trump publicly denounce anti-Semitism by name. He had resisted the move for weeks, but finally spoke out on Tuesday.

“The anti-Semitic threats targeting our Jewish community and community centers are horrible and are painful and a very sad reminder of the work that still must be done to root out hate and prejudice and evil,” Trump told reporters.

Striker, the Stormer writer, did not take Trump’s statement at face value. Instead, he saw it as evidence of overzealous Jews seeking political control.

“The more Trump gives them, the more emboldened and demanding they will become,” Striker lamented in a separate post. “If he appeases these lobbyists, he gains nothing, but will lose his millions of Alt-Right supporters.”

Striker cast himself and the Daily Stormer as the true victims – of the Anti-Defamation League and other Jewish groups.

“The ADL’s real intention in donning this disguise of an aggrieved minority is not to keep Jews and their property physically safe,” Striker wrote. Instead, he claimed, the organization strives to silence people who, like him, are not “afraid to call out Jews when they engage in unethical behavior.”

“Not trying to counter-signal the administration,” Duke wrote on Twitter, “but showing up everytime Jews get upset about anonymous threats only plays into their agenda.”