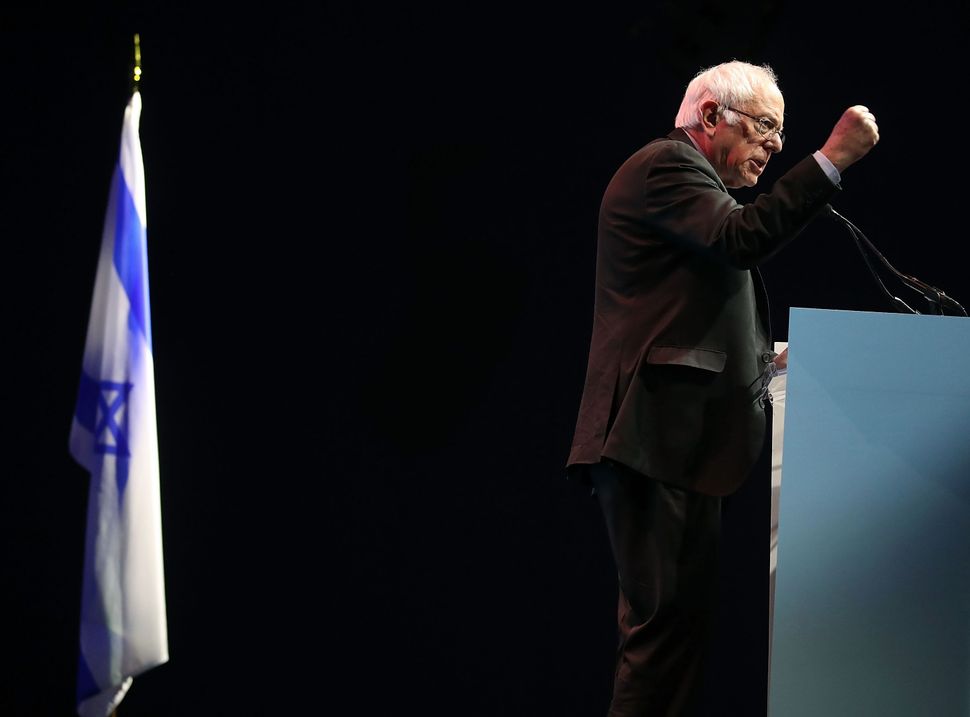 At the J Street Conference on February 27, Bernie Sanders delivered one of the most intriguing Israel-related speeches an American politician has given in years. Read it carefully, and you can grasp Donald Trump’s radicalizing impact on the America-Israel debate. The more Trump and his advisers question long-standing taboos by shifting right, the more Democrats will do the same by shifting left.

To understand how Sanders’s speech pushes the boundaries of the Israel debate in Washington, D.C., compare it to the one John Kerry gave last December after the Obama administration abstained from a United Nations resolution criticizing settlements. In that speech, Kerry defended American policy the way Obama officials usually did: in the language of Israeli self-interest. Kerry declared, “Throughout his administration, President Obama has been deeply committed to Israel and its security, and that commitment has guided his pursuit of peace in the Middle East.”

Kerry discussed Palestinian rights and dignity, too. But they were a secondary theme.

That’s not how ordinary Democrats think anymore. This past January, the Pew Research Center found that, for the first time since they began asking the question in 2001, Democrats were as likely to sympathize with the Palestinians as with Israel. Sanders’s speech reflected that.

Like most American politicians, he celebrated Israel’s war of independence. But then he did something American politicians almost never do: He acknowledged the war’s impact on Palestinians. “Like our own country,” Sanders declared, “the founding of Israel involved the displacement of hundreds of thousands of people already living there, the Palestinian people. Over 700,000 people were made refugees.”

Sanders’s moral parallelism continued when he left the past and moved to the present. “My question here today is, ‘Okay, what now?’” he continued. “Where do Israelis and Palestinians go from here? What should be U.S. policy to end this conflict, to end this 50-year-long occupation, and enable a better, more secure and prosperous future for Jews and Arabs, Israelis and Palestinians alike?”

For Kerry, the answer to those questions was clear: the two-state solution. In his December 2016 speech he mentioned the phrase 29 times. But Sanders didn’t answer the question by talking about diplomatic agreements. He answered it by talking about “the values we share” as progressives. “We believe in democracy. We believe in equality. We believe in pluralism. We are strongly opposed to xenophobia. We respect and we will protect the rights of minorities.”

What political arrangement would best reflect those values? Sanders didn’t exactly say. He acknowledged that the “two-state solution… has been bipartisan U.S. policy for many years” and “is also supported by an overwhelming international consensus.” And he criticized Trump for casually suggesting that he might discard it in favor of one state.

But Sanders also peeked through the door that Trump opened. Kerry described the demise of the two-state solution as calamitous. If it dies, he insisted, Israel “won’t ever really be at peace.”

Sanders, by contrast, was less apocalyptic than quizzical. “If Palestinians in the occupied territories are to be denied self-determination in a state of their own,” he asked, “will they receive full citizenship and equal rights in a single state, potentially meaning the end of a Jewish majority state? These are very serious questions with significant implications for America’s broader regional partnerships and goals.”

In emphasizing the values that an Israeli-Palestinian agreement must reflect rather than the two-state solution as an end in itself, Sanders again reflected a shift on the grassroots left. J Street still firmly supports two states. But the millennial-powered If Not Now, which contains many veterans of J Street’s student wing, is officially agnostic on the subject. So is the Boycott, Divestment and Sanctions movement, although one-staters are its most prominent leaders.

This shift preceded Trump, but he is accelerating it. A more conventional Republican president would have undermined the two-state solution in practice while supporting it in theory, which is what the American Jewish establishment has been doing for decades. But Trump is contemptuous — or maybe just ignorant — of the long-standing rhetorical conventions guiding U.S. policy toward Israel.

He’s not merely hostile to the two-state solution in practice. He and advisers like ambassador-designate David Friedman talk openly about ditching it in favor of a one-state alternative, and thus empower those on the Israeli right, like Naftali Bennett, who want to do the same. In the years to come, this will liberate Democratic politicians to think beyond two states, too. Sanders’s speech is the clearest evidence yet.

The two-state solution, which I still support, requires both American conservatives and American progressives to compromise core values. The right must compromise its values of nationalism and Judeo-Christian religious authority by giving up biblically sacred land to a state populated mostly by Arab Muslims. The left must compromise its values of secularism, multiculturalism and equality by supporting two ethnically and religiously based countries.

But we do not live in an age of moral compromise. We live in an age of moral extremism. Trump is making the Republican Party more nationalistic. Democrats are responding by becoming more universalistic. Trump’s Republican Party is becoming a more naked expression of white, Christian self-interest. Democrats are responding by embracing the interests of people of color more emphatically.

All this will change the American debate over Israel. For Barack Obama and John Kerry, the impending death of the two-state solution was a tragedy. The Democrats who follow them may increasingly see it as an opportunity instead.