What My Sadly Deformed Hamantaschen Teach Me About Aging 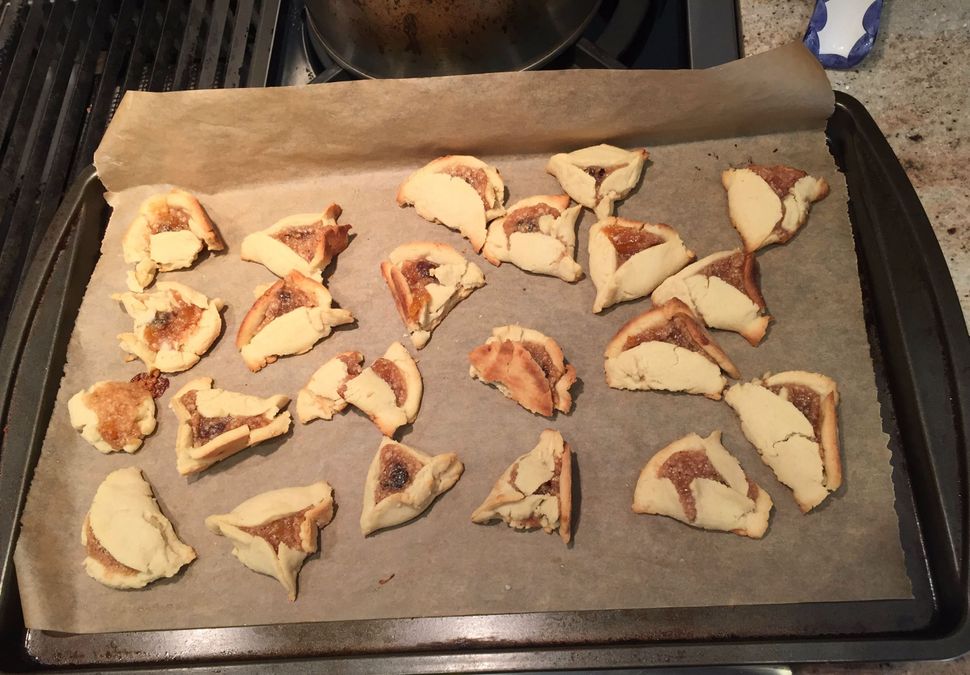 Midway into my first batch, as the rolling pin clumsily turned my dough into something resembling a map of Africa after a multi-year drought, I wondered what I could have possibly been thinking when I agreed to this assignment.

This was my first attempt at baking hamantaschen, the triangular-shaped cookies we eat especially at Purim, in many years. I decided right then it would be my last — but not before teaching myself a lesson about what my friends call “wise aging.”

I am a decent cook. Along with my husband, I like to believe that we are warm and gracious hosts. But baking delicate pastries with taste and precision has been more of an aspiration than an accomplishment down through the years.

Lord knows I tried. As a working mother raising children embedded in a Jewish community, I was constantly scrambling to achieve at my career without neglecting the traditional expectations of a homemaker like my mother. Perfection was never my goal; in that, I was realistic. Even though I was secretly jealous of the women in my community who managed to assemble elaborate packages of baked goods and drive around the neighborhood delivering them on the Sunday before Purim, I knew that wasn’t me.

It was enough that I dutifully baked hamanstaschen each year, seeking to make it a fun and not frustrating experience by inviting my daughters to join in and add whatever crazy filling they wanted: chocolate chips, peanut butter, green olives. (Yes, olives.) Some years I used my mother-in-law’s recipe with the rich cream cheese dough, though I could never match her careful folding and presentation.

As the nest became emptier, my baking escapades subsided but never disappeared. I recently started baking challah and while the initial efforts were embarrassing — I will be forever grateful to those friends who withstood my early attempts with game faces — I am finally getting the hang of proofing, kneading, punching, shaping and waiting until just the right moment to remove the golden bread from the oven.

It was after sharing my much praised challah at one such dinner that friends asked if I’d bake hamantaschen for the festive meal they were holding on Purim, and to which we were invited. Why not? I can do this, I thought.

Well, I can’t. I followed the instructions without improvisation, picking a simple, classic dough recipe and a fancier filling — nuts, dried fruit, jam, spices, even a splash of rum. Despite my careful efforts, the triangles wouldn’t hold as they baked, turning the cookies into deformed shapes which looked like an oddly configured archipelago floating on parchment paper. Worse yet, as the pockets loosened, the filling splayed beyond its borders.

Was the dough too dry or too wet? The filling too much or too little? Who knows. I gave the best of the bunch to my friends, and left the rest for my husband with the assurance that they taste a lot better than they look.

And I realized an important lesson. I need to let this go. As I grow older, I am trying to incorporate some of the teachings of the Wise Aging movement, which encourages us to see our later years as full of spiritual opportunity but also asks that we modulate our expectations to come to grips with certain things that are not going to happen. I will grow to become a better challah-baker. I will never make a coherent batch of hamantaschen. Or more precisely — I chose not to spend the time perfecting a task that I will likely use only once a year, and stop pretending that I can replicate the skill that my mother and mother-in-law displayed.

There is something liberating about this realization. I now hope that I can keep this same perspective when, next month, I again try to make a decent batch of matzo balls.

What My Sadly Deformed Hamantaschen Teach Me About Aging