Anti-Semitism Continues In America — And Trump Is Silent Again 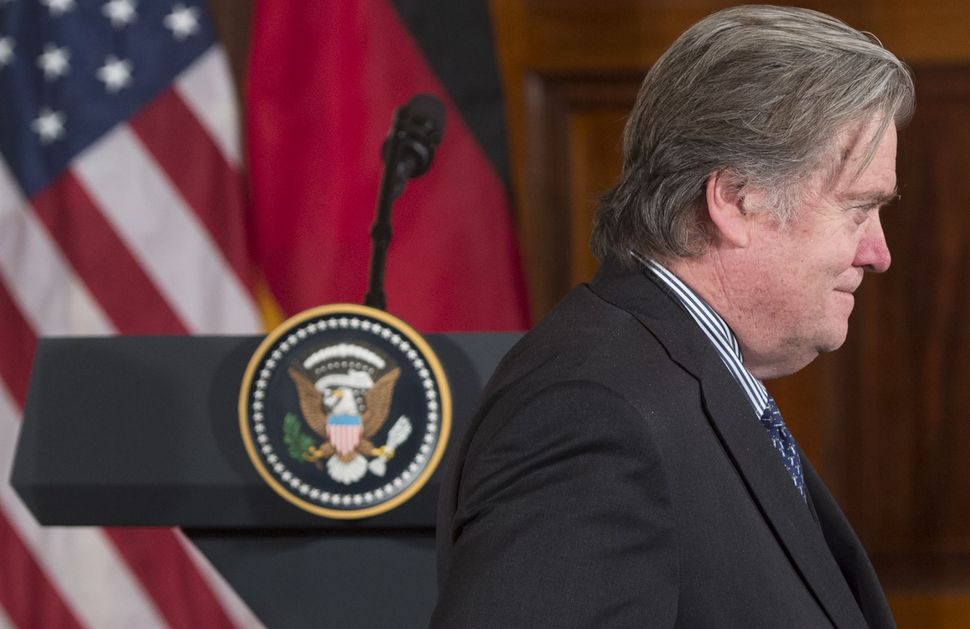 What kind of president looks for an excuse not to condemn anti-Semitism? And what kind of administration points to the apprehension of one depraved suspect in Israel, among scores of recent perpetrators, as the pretext for denying the epidemic of anti-Semitism on the president’s watch?

The answer: A presidency out of touch with the spread of anti-Semitism across America. Unless President Trump acknowledges the epidemic and creates a new plan to stop it, he will have withdrawn the moral metronome against prejudice set by most presidents since Abraham Lincoln.

The president is perilously close. Last month in Jerusalem, authorities in Israel arrested a 19-year-old Israeli American for allegedly phoning in bomb threats to Jewish community centers across the United States. Yet press secretary Sean Spicer used the arrest to justify Trump’s delayed responses, and more frequent non-responses, to anti-Semitism.

“There was an immediate jump to criticize folks on the right,” Spicer told journalists, “and to denounce people on the right and ask them to condemn [the Anti-Semitic threats]. And it turns out that in fact it wasn’t someone on the right.”

Nonsense. No single perpetrator, left or right, is responsible for the spread of anti-Semitism under President Trump. And no one in America ever said otherwise. Anti-Semitism in America is not the consequence of one teenager gone rogue.

The suspect in Israel did not paint swastikas on schools, homes and Jewish institutions since Trump’s inauguration. The Southern Poverty Law Center reports at least 74 incidents of anti-Semitic hate crimes across the United States since January 20 – excluding the bomb threats made.

Many Americans are not giving the president the benefit of the doubt when it comes to anti-Semitism. A shocking new poll of 3,600 Americans commissioned by the Anti-Defamation League reveals that roughly one-third of all Americans believe that Trump personally holds anti-Semitic views, while only 50% believe he does not.

Nor is deputy national security adviser Sebastian Gorka’s relationship with an organization linked to Nazism a figment of left-wing imagination.

Gorka takes issue with that, but acknowledges he has worn a medal associated with Nazi sympathizers. He minimizes his choice of dress as a tribute to his father, but really, now: Didn’t Dad leave a tie? How many of us wear Nazi-sympathetic medals to remember our parents?

None of this seems to matter to Trump. Nor did it matter enough for him to recognize the genocide of Jews in the Holocaust. To this day, the president has stubbornly refused to correct his exclusion of the Jewish people in his statement on International Holocaust Remembrance Day, January 27. My organization begged this administration for weeks to correct its unconscionable error. Instead, we got lectured by Sean Spicer at his White House press briefing February 21. Spicer said he wished we had “praised the president” instead.

You read correctly. Our organization named after Anne Frank, of which her father, Otto Frank, was a founder, asked the president to include Jews in Holocaust remembrance, but the president refused and his spokesman told us to be grateful.

There have been a couple of bright spots in the president’s recognition of anti-Semitism, but they came after consistent protests by our organization and others. After a public uproar following the desecration of cemeteries, Vice President Mike Pence helped clean up the vandalized cemetery in St. Louis and the president delivered an address to Congress that began with a denouncement of anti-Semitism.

Then the administration fell back on its instinct of minimizing and politicizing anti-Semitism as a left-wing conspiracy. Spicer callously ignored incidents of hate crimes across the country after the 19-year-old’s arrest.

It’s not as if the president himself lacks the capacity to express his outrage quickly. He raged on Twitter about former president Obama’s eavesdropping on Trump Tower notwithstanding zero evidence. He angrily tweeted about Alec Baldwin’s portrayal of him on “Saturday Night Live.” The president even condemned a fictional video produced by Snoop Dogg.

But when it comes to the continuing spread of anti-Semitism of his watch, the president has had no immediate inclination to rage the same way. 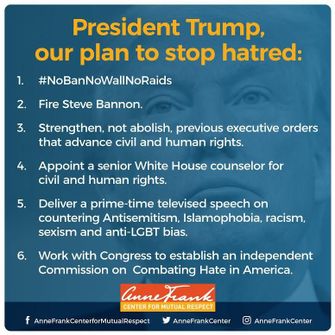 A nation is in no shape to innovate unless it is a healthy nation. It takes presidential leadership to help find the cure. Otherwise, the president’s paltry response to anti-Semitism will continue as a virus of complicity that spreads further across America.

Steven Goldstein is the executive director of the Anne Frank Center For Mutual Respect, the independent U.S. organization among Anne Frank organizations worldwide.

Anti-Semitism Continues In America — And Trump Is Silent Again