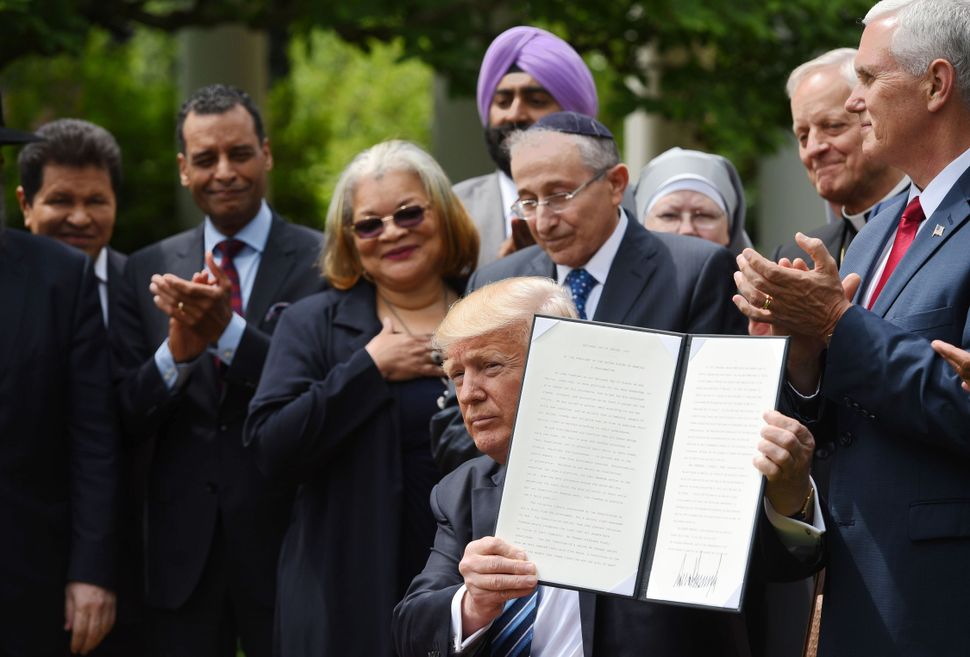 Before President Trump signed the “religious liberty” executive order on May 4, rumors about the contents of the rule spurred many rumors, as well as the requisite dire warnings from many in the media.

But the final religious liberty executive order did little to change current rules already on the books.

First, following up on the president’s campaign promises to religious groups, the executive order ostensibly took aim at the Johnson Amendment. In a nutshell, the amendment prohibits all non-profits, as a condition of their non-profit status, from “participat[ing] in, or intervene[ing] in (including the publishing or distributing of statements), any political campaign on behalf of (or in opposition to) any candidate for public office.”

This provision of the Internal Revenue Code was first introduced by then-Senator Lyndon B. Johnson—hence the amendment’s name — evidently because of a bad election experience he had with non-profits supporting his political adversary.

But the Johnson Amendment has long been a thorn in the sides of many houses of worship whose religious leaders felt muzzled, unable to use their faith to guide their congregants on matters relating to political campaigns. Indeed, for nearly a decade, churches around the United States have participated in “Freedom Pulpit Sunday,” with pastors intentionally flouting the restrictions of the Johnson Amendment to trigger lawsuits and thereby mount a legal challenge to the amendment’s restrictions.

While the executive order does instruct all executive departments and agencies to “respect and protect the freedom of persons and organizations to engage in religious and political speech,” it does so only “to the greatest extent practicable and to the extent permitted by law.” And, to the extent the executive order moves the ball, it does so by simply prohibiting government from singling out houses of worship for worse treatment than other non-profits. Thus, the government can’t take any “adverse action” against a religious organization for speech “about moral or political issues from a religious perspective” that it hasn’t sanctioned similar moral or political speech by other non-profits. And even this is caveated once again; these provisions of the order are only required “to the extent permitted by law.”

The only other noteworthy provision of the executive order is its instruction that the government “issue opinion and agreed that the religious exceptions to the contraceptive mandate had to be modified to comply with the Religious Freedom Restoration Act.

By once again issuing regulations “consistent with applicable law,” it’s not clear whether the rule adds much—or anything—in terms of actual legal requirements.

The entire exercise appears to be far more about messaging. Critics have lined up to attack the order even as it doesn’t seem that there is all that much to attack given the lack of substance. And the administration has served a sop to supporters, while the order itself ultimately turns out to be much ado about nothing.

All this should be cause for concern. The fact that “religious freedom” can so readily be deployed to stir passions makes it increasingly hard to imagine how we will resolve more important legal dilemmas in the coming years. Indeed, there are deep questions about how to balance the interests of various faith communities alongside the interests of the LGBTQ community — as well as how to balance religious worldviews against claims of gender equality.

One thing we can be sure of, however. If politicians and pundits get riled up over religious freedom when little is at stake how we will be able to facilitate the calm and thoughtful discussion we will need going forward to tackle the truly challenging, but vital, questions that threaten the future viability of religious liberty in the United States.

is an expert on religious law and religious liberty. He is currently is the Brenden Mann Foundation Chair in Law & Religion and Vice Dean for Faculty & Research at Pepperdine Caruso School of Law, Visiting Professor and Oscar M. Ruebhausen Distinguished Fellow at Yale Law School and Senior Fellow at the Shalom Hartman Institute.