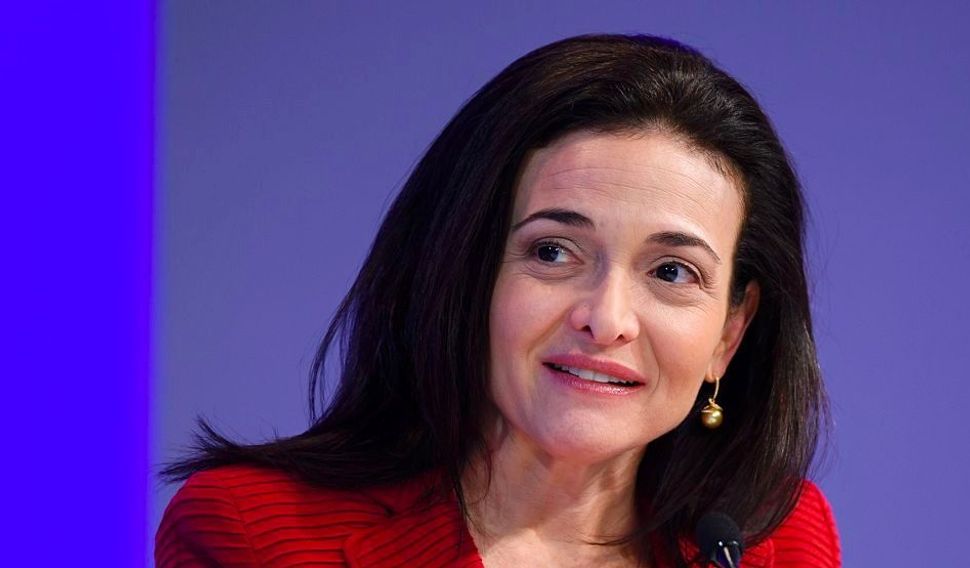 Sheryl Sandberg may be the most famous widow in America right now. Before her husband, Dave Goldberg, died suddenly two years ago, she was already famous as the second-in-command of Facebook, the best-selling author of “Lean In” and a globe-trotting speaker and influencer — who did all this while raising two children in an equitable and loving marriage. (Extreme wealth, prestige and privilege helped.)

Goldberg’s sudden death at age 47 on May 1, 2015, made Sandberg seem mortal. Grief nearly crushed her, and she wasn’t afraid to say that out loud. But because she is Sheryl Sandberg — brainy, driven and connected — she didn’t stop there and called upon the top grief experts to analyze what was happening to her and her children, and to guide their recovery.

All this we know from the buzz that accompanied the publication of her new book, “Option B: Facing Adversity, Building Resilience And Finding Joy,” which she wrote with her close friend Adam Grant, a management professor at the Wharton School of the University of Pennsylvania.

But what I didn’t appreciate until I spoke with her on the phone the other day was how significant and emotional a role Judaism played in the processing of her grief.

“The structure was so helpful for me,” she said. “And the connection. The connection gives us meaning.”

Speaking from Facebook’s Menlo Park, California, corporate campus, her voice — slightly high and animated — was immediately recognizable. I had seen her onstage 10 days earlier, when Katie Couric interviewed her and Grant at the 92nd Street Y in Manhattan, and I imagined that she would be similarly poised and put together during this phone interview. But our conversation took place just a few days after the second anniversary of Goldberg’s death — a day she said was “brutal” — and occasionally, her voice betrayed a less practiced emotion.

Raised in North Miami Beach by parents involved in the movement to free Soviet Jews, Sandberg seemed to be one of those kids smitten by Judaism in summer camp. (She went to Camp Coleman, in Georgia, affiliated with the Reform movement; her children now go to a camp run by the Conservative movement.)

The camp experience literally nourished her at her husband’s grave.

Sandberg found her husband dead — though she didn’t believe it in that moment — on the gym floor of a resort in Punta Mita, Mexico, where the couple was vacationing with friends. (She learned later that he died of a cardiac arrhythmia.) She flew back to Northern California to tell her children that they would never see their father again, an episode she recounts in heartbreaking detail in “Option B.”

But it was the scene at the graveside that struck me, and I asked her to explain: “When my kids collapsed at the grave, I didn’t know what to do. It was one of the worst moments of my life. I wasn’t rational. I wanted to help. I wanted to comfort.

“Lying on the ground, I started singing ‘Oseh Shalom’ [a prayer for peace that is usually sung or chanted]:”

He who makes peace in His high places

May He bring peace upon us

And upon all Israel

And let us say Amen.

“I may have known it as a child,” she continued. “It was my favorite song from camp. It came from somewhere. That was a moment where something was going on with the divine presence.”

Sandberg apparently doesn’t pray regularly — she didn’t realize until afterward that “Oseh Shalom” is the last line of the Kaddish and the Amidah, prayers that are repeated several times during every Jewish service. But she eagerly embraced the Jewish rituals that shape and structure death and mourning.

The seven-day period of shiva, when mourners stay at home for regular prayers and to receive visitors, was also helpful. “Having your house fill up with the people you love is comforting,” she recalled. So was the constant repetition of the mourner’s prayer: “Jews have been saying it for a long time. Long before I said it for Dave, Dave said it for his father. And before that, for centuries.”

Jewish ritual creates a calendric path to process grief and gradually re-enter the world, as Sandberg noted in her book. After the weeklong shiva, the next important marker is shloshim, a month after the death of a spouse. Most other loved ones mourn formally for nearly a year.

As Sandberg wrote in “Option B”: “A childhood friend of mine who is now a rabbi told me that in the Jewish religion, mourning for a parent, child or sibling is a year, but mourning for a spouse is just 30 days. ‘The rabbis wanted people to move forward,’ he said.”

Not to be too blunt, but a spouse can be replaced. A parent, child or sibling cannot.

Sandberg told me that she had mixed feelings at that moment: “That this is the end of some period of mourning is both comforting and a little bit scary, because I didn’t feel like mourning is over.”

At Grant’s suggestion, she had kept a journal during the prior month, and decided to close that practice with a long, heartfelt entry. “I poured my emotions into a post but didn’t think I’d ever share it — it was too personal, too raw, too revealing,” she wrote in her book. “Finally, I decided it was unlikely to make things worse — and maybe it would make them better. Early the next morning, before I could change my mind, I hit ‘post.’”

The post went viral. At the 92Y event, Sandberg pointed out that she didn’t realize how public it would become — surprising, coming from the chief operating officer of Facebook! Still, it became a remarkable social media phenomenon, shared more than 400,000 times and positioning Sandberg as unusually vulnerable and as honest, helpful and kind.

Reading the post again, I realize that it touches on the major points she elaborated on in “Option B ” — without all the references to research and the many interviews gleaned from the army of assistants acknowledged at the end. Like so many self-help books, “Option B” can be reduced to a few simple and profound truths, and Sandberg was already aware of them just a month after her husband died.

She already was writing that optimistic bromides don’t help someone whose world has shattered, that mourners don’t need to be told life will get better when they can’t believe it will, that instead they need their pain to be acknowledged and the uncertainty in their future legitimated. Ask not, “How are you?” Ask instead, “How are you today?”

Learning resilience and the expression of real gratitude is in there, too, but I think her most significant cultural message is about overcoming the isolation that grips those who have lost a loved one or are dealing with some sort of serious adversity. She recounts how a friend would drive by her home but was afraid to ring the doorbell; how co-workers would slink away when she entered the room; how we act as if grief is somehow contagious and as though mentioning a loss reminds the mourner of something he can never, in fact, forget.

“The worst thing is not when people say something wrong,” she told the 92Y audience. “It’s when they say nothing at all.”

Here is where Jewish tradition offers another brilliant insight. I realized when saying Kaddish for my own parents that the obligation to do so daily in a minyan — in my case, 10 men and women — meant that I was never mourning completely alone. I was surrounded by others in prayer, often those who were mourners themselves. The social imperative is built into the system.

I pressed Sandberg on whether religious communities of all faiths could do more to confront the isolation suffered by those suddenly alone. “Everyone needs more support than they are getting,” she said diplomatically. “One of the lessons here is that we definitely need to do more than we are doing.”

Sandberg’s answer is to follow the Facebook model and create a virtual community. Just as she did with LeanIn.org”, she’s created OptionB.org, a website with information and resources and with places to share stories and join groups, all surrounded by soft-lighted images of struggling but resilient people (and plugs for her book). She told me that 200,000 people had already connected to the website, and that she herself had just posted something to commemorate the second anniversary of her husband’s death.

“It was pretty amazing for me,” she said. “The reaction was wonderful.”

Personally, I question whether virtual communities can replace personal ones during times of grief. The stirring story from a stranger online is nice; the home-cooked meal delivered to someone sitting shiva actually nurtures. And of course, all the talking in the world cannot make up for the abysmal fact that while Facebook and other like-minded, well-resourced companies can offer bereavement leave and social services to their employees, too many Americans suffer without any such safety net.

But Sandberg seems to recognize that, too. “We need to build resilience together,” she told me, “rooted in religion, rooted in schools, rooted in our health care institutions.” This way, “we help each other in the hardest moments of our lives.”

As simple as that all sounds, it is a message deeply at odds with the harsh political climate right now, where struggling Americans are too often blamed for their misfortune rather than guided through it. If Sheryl Sandberg can be that unlikely guide, all the better. And if by doing so she highlights Judaism’s counter-cultural but urgently needed teachings, then she will have made a genuine contribution.

“Judaism is my home,” she said as we were about to end our conversation. “Judaism is super important to me, in death and in life.”