I’m a “yarn bomber,” which means I decorate outdoor spaces with crochet. But I can’t stand “yarn bombing.”

The phrase unnerves me, because the word “bomb” obliterates the good will, consciousness-raising and well-meaning mischief-making by those who see the great outdoors as their yarn canvas.

So with the advent of “Yarn Bombing Day” on June 11 (yes, it’s actually a national day, and I for one am excited about it), I call on all fellow yarnies and fiber folk to drop “bomb” from our lingo. Instead, Diane Ivey, owner of Lady Dye Yarns, LLC, recommends renaming the practice “yarn graffiti.” Such a name-shift clearly tells people what the practice is, and reminds us that it’s illegal so we need to take care that our installations don’t damage the surfaces to which they’re adhered (I’m also fond of the phrase “yarn installation,” which gives it an artsy flair).

For me, yarn is the equivalent of a spray can. My targets are trees, poles and sculptures, and my crochet is intended to tell a story — and offer commentary — about issues relating to race, religion and gender in America. My installations have included crocheted faces of women outside Susan B. Anthony’s home in Rochester, N.Y.; Jewish stars and hearts following the March vandalism at the Waad Hakolel cemetery; and a piece of crochet matzah during Passover with the embroidered words, “bondage, freedom, matzah.” I attached the unleavened yarn to a pole in a parking lot that was once the spot of Frederick Douglass’ first house in Rochester, where he published his abolitionist newspaper The North Star. The wordage on the matzah was a play on the title of his autobiography, “My Bondage and My Freedom.” 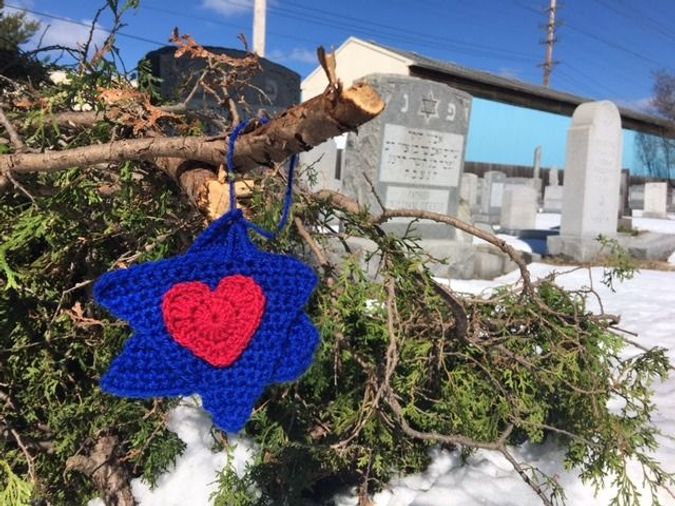 A crocheted Jewish star affixed to a branch limb at the Waad Hakolel Cemetery in Rochester, N.Y., after vandals struck the cemetery in March. Image by Hinda Mandell

But I want bombs nowhere near my yarn — even if it’s “just” in metaphor form. This is especially the case in instances when I seek to do yarn art in relation to, and in solidarity with, people affected by military bombs and bomb threats.

For instance, I once approached a staff member at a refugee outreach nonprofit in Rochester NY to inquire whether the organization might be interested in a yarn installation on its premises. Thinking that she might be familiar with the term “yarn bombing” — instead of my more obscure phrase “yarn installation” — I launched into my schtick: “I don’t like the word ‘bomb,’ but the art technique is called ‘yarn bombing’ where you decorate the outdoors with yarn…”

She responded, “Yeah, our guests’ lives have been upended by bombs, so …”

The great irony is that fiber artists regularly engage in public art and philanthropic efforts to show solidarity with refugees whose lives have been shattered by war. For instance, the crochet artist Olek worked with Syrian and Ukrainian refugees in the Swedish town of Avesta to cover an entire house in pink yarn as “a symbol of a brighter future for all people, especially the ones who have been displaced against their own wills.”

Of course, I should have known not to utter the “b” word at the refugee nonprofit because only weeks before I had a similarly awkward exchange at the local JCC where my daughter attends preschool. There, I asked the school’s director if I could hang crocheted hearts at the outdoor entrance following the March 7 bomb threat that was made directly against the school.

But before I could distance myself from the phrase, the director calmly said, “Let’s not use that phrase here.”

You might wonder why this yarn practice happened upon its “b” name in the first place. According to Ivey, who draws inspiration from urban graffiti for her yarn dye lots, the term is a riff on popular (spray paint) graffiti lingo, created by New York City street artists in 1970s. In that context, “to bomb it” or “bombing it” refers to painting numerous surfaces through graffiti tags. The problem with the phrase “yarn bombing,” according to Ivey, is “It goes back to cultural appropriation and what people think is cool.”

In the yarn world today, the origins of “yarn bombing” is commonly attributed to Magda Sayeg, who adhered a knit cozy to the door handle of her Texas clothing boutique in 2005. And with that seemingly simple act of using yarn as a decorative supplement removed from its more typical context, the rest is yarn history. But the complexity of the phrase is compounded when many yarn graffiti artists, especially white women, co-opt a sleek urban affect as they engage in public yarn art that is technically illegal but considered the less “offensive” and certainly “cozier” form of graffiti. While there’s much debate whether spray paint graffiti is urban blight or creative self-expression, yarn graffiti, though also subversive, is generally regarded as cute, colorful and playful.

Yet some yarn graffiti artists have adopted racially charged nom de plumes as a type of yarn blackface that’s effect is racist, even if its intent is “cool.” In fact, that dynamic is the crux of blackface — donning blackface allows white people to act out in ways they wouldn’t or couldn’t normally, typically in a crude or overly silly fashion, because social expectations of “appropriate” behavior would forbid it unless wearing a “mask” gives people a “pass.”

There is no question that installing yarn objects on private or even public property without consent is illegal. Yet there’s also no question that society and even law enforcement often view yarn graffiti in a more hospitable light than paint graffiti. Those who do yarn graffiti have a moral responsibility as artists to not only consider the impact of their work but also to reflect on why they’re granted a law-enforcement advantage over traditional graffiti artists. Yet when yarn artists aren’t reflective on the forces at play that give them a legal leg up, and when they simultaneously revel in coopting graffiti language, culture and an aura of surreptitiousness that is necessary for street artists not to get caught and arrested, their actions dance on racial ignorance. In other words, yarn graffiti artists should be wary of benefiting from the culture of street art without assuming its risks due to issues of race, class and the perceived cuteness of the graffiti medium, depending.

Those who engage in yarn graffiti may be part of a niche subculture, but that doesn’t mean that the gender and race dynamics embedded within it should get a free pass. When a public yarn installation is done right, it can be stunning. It can spark a range of emotions, whether it’s disbelief, joy or intrigue. But when a phrase such as “yarn bombing” is so divorced from its origins that outsiders hear it and think of “bombs” that kill, and when insiders ripped the original phrase from a different cultural context from which they have no historic ties, it’s time we move on linguistically from “yarn bombing.”

Hinda Mandell is an assistant professor in the School of Communication at RIT. Follow her crochet adventures on Twitter: @crochetactivism