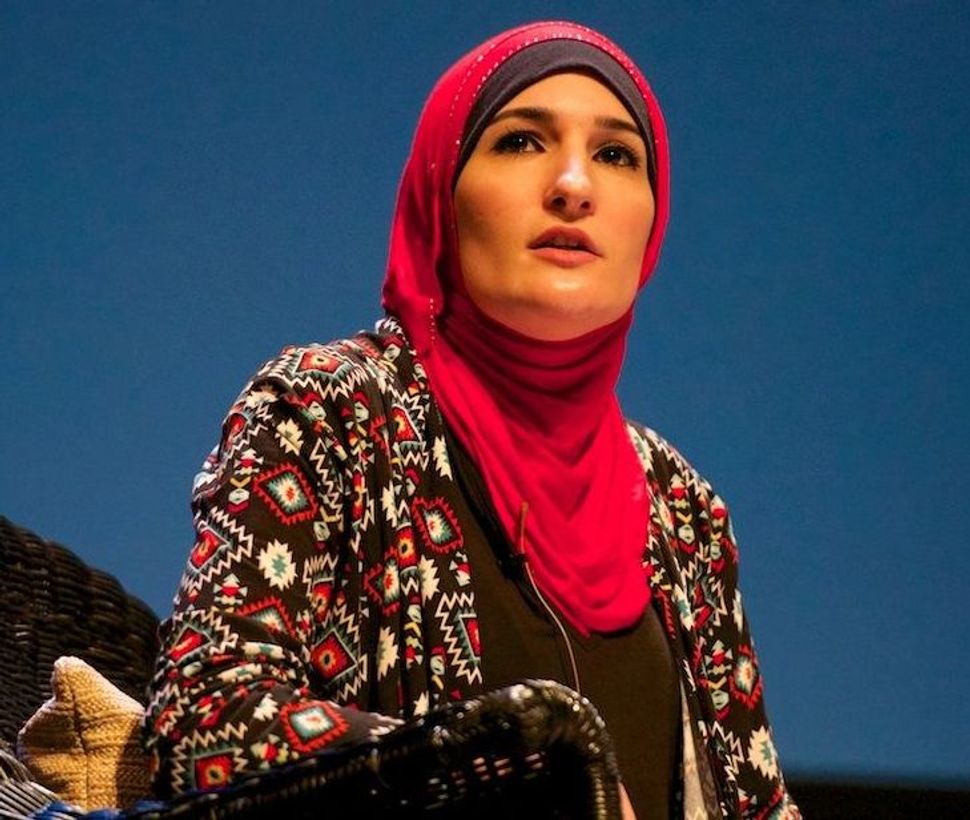 Linda Sarsour, a Palestinian-American activist and a co-organizer of the Women’s March on Washington, has shaken the Jewish world with a few freakish remarks on Zionism and feminism. In an interview, “Can You Be a Zionist Feminist? Linda Sarsour Says No”, in The Nation in March, Sarsour declared: “You either stand up for the rights of all women, including Palestinian, or none. There’s just no way around it.”

Had she said “the rights of all women, including Israeli, Palestinian or Kashmiri,” one might be inclined to believe that Sarsour really cares about the conditions of women everywhere. However, the fact that she demands feminists to condemn Israel, not Palestinian incitement, nor Indian military control of Kashmir, raises serious questions about her motives. This, combined with tweets such as “Nothing is creepier than Zionism” and her active campaign for the anti-Israel boycott, divestment, and sanction movement, makes it clear that Sarsour wants to warn women that Zionism and feminism are incompatible.

Nevertheless, The City University of New York invited Sarsour to deliver a commencement address June 1, spurring controversy about whether she is fit to serve as an inspiring role model to graduating students.

The Sarsour anomaly represents a worrisome sign, not so much for her winning an undeserved commencement podium at CUNY, but primarily for the reaction of the Jewish community to her vitriolic anti-Israel rantings.

Do not get me wrong, there have been indignant reactions to Sarsour from offended Jewish feminists, all saying in effect: “Why, Linda? Why do I have to choose between my Zionism and my feminism?” What I find absent is an assertive feminist voice protesting: “Excuse me, sister Linda, it is Zionophobia and feminism that are incompatible.” After weeks of waiting for such reaction, I began to wonder whether our feminist sisters have lost the fighting spirit of their legendary predecessors.

For clarification, I use the term “Zionophobia” to denote the irrational fear of Zionism — that is, the rejection of Zionism’s aim of securing a homeland for the Jewish people in some part of historical Eretz Israel. It purposely rhymes with “Islamophobia,” to emphasize the racist commonalities of the two (see my Los Angeles Times piece “Is anti-Zionism hate?”.

Among the many pro-Sarsour letters that I have read, the one that disappointed me most was a letter signed by “prominent Jewish leaders” who came to Sarsour’s defense before her CUNY speech. Here in a nutshell is how the leaders exonerate Sarsour from wrong doing: “We may not agree with Sarsour on all matters…. With Sarsour and others, we work as allies on issues of shared concern and respectfully disagree when our views diverge. We will not stand by as Sarsour is falsely maligned.”

Here’s my response to the signatories of that letter.

I respectfully disagree with you on whether Linda Sarsour is falsely or rightly maligned. I have tried to carefully examine the entire list of allegations voiced against her; permit me to report my findings. While some of the allegations may indeed be based on hearsay or on her impulsive tweeting, much of what Sarsour is criticized for is solidly documented and should be taken seriously, not only by Jews, but also by every person of good conscience. To put it bluntly, Linda Sarsour is a fake feminist and an incurable Zionophobe.

Sarsour is a fake feminist because she excludes important communities of women from her politically driven definition of womanhood. There are millions of Muslim women who view Sarsour’s interpretation of Sharia Law as an obstacle to their struggle for equality and as an endorsement of their subjugation under male-dominated authorities. If you have not yet had a chance to speak to progressive representative of these women, I urge you to do so, as I have done. Please speak to Asra Nomani, Qanta Ahmed, Ayaan Hirsi Ali or Irshad Manji. It was one of these brave women who taught me the expression “fake feminist” when the name Linda Sarsour came up.

But I have a Jewish reason for labeling Sarsour a “fake feminist” — her exclusion of Israeli women. There are more than 3 million Jewish women in Israel; some are left-leaning and some right-leaning, yet most are uniformly proud Zionists who created an exemplary feminist movement. Sarsour and her anti-Zionist supporters now wish to eject these women from their newly defined, exclusivist vision of the feminist tent.

Lets take a closer look at these women. Despite 70 years of wars and besiegement, living under the shadow of 150,000 Hezbollah rockets and traumatized by the fear of finding their children blown to pieces, Israeli women have scored unprecedented achievements of gender equality. They have in fact become a beacon of equality in the Middle East and beyond. Linda Sarsour now questions their compatibility with feminism, and some Jewish leaders rush to her defense, in the name of building coalitions “on issues of shared concern.” Can we look at the eyes of our Zionist daughters and granddaughters and tell them they have been expelled from their movement on the altar of those more pressing issues?

Certainly, we need to “work as allies on issues of shared concern and respectfully disagree when our views diverge.” But we do not trade or bargain with issues that are at the center of our identity as a people. From everything that I have learned, the right of Jews to a homeland is one of those central issues of Jewish identity. Some of our sages even went as far as weighing it higher than other Mitsvot in the Torah (Shekula Keneged Kol Ha-Mitsvot,Sifrei, Parashat Ree). So, it is certainly not a peripheral matter that we can “respectfully disagree” about, and then brush aside in order to gain a seat on Sarsour’s bandwagon.

If there is one thing I respect in Linda Sarsour, it is her candid, uncompromising stand for tenets that are central to her identity — namely, Zionophobia. We saw it in Chicago on April 2. Speaking side by side with convicted Palestinian terrorist Rasmea Odeh, Sarsour proudly proclaimed, “If what is being asked of me by those who pronounce themselves and call themselves Zionist is that I, as a Palestinian American, have to somehow leave out a part of my identity so you can be welcomed in a space to work on justice, then that’s not going to be the right space for you”

“We, as Palestinian Americans…we will not change who we are to make anybody feel comfortable. If you ain’t all in, then this ain’t the movement for you,” she said (JTA, April 2).

Back to our “leaders,” I believe many people in your constituencies would have liked to hear from you, however mildly, that we, too, have values and principles that define who we are, and we too do not trade these values just to make anybody feel comfortable. I would even venture to predict that your leadership stature in the coalitions that you aim to create would stand taller if you speak candidly to Sarsour and answer her in her own style:

As heirs to a justice-driven Jewish heritage and the teachings of our prophets we believe that “justice, freedom and dignity” apply to all people, including Israelis, and including American Zionists. Your Zionophobic stance betrays this heritage and compels us to sadly conclude that you are not qualified to lead a feminist movement. Zionophobia, unfortunately, is incompatible with the kind of feminism as we understand it.

Judea Pearl is a Chancellor professor at UCLA and president of the Daniel Pearl Foundation, which promotes press freedom and East-West understanding. He is a co-editor of “I am Jewish: Personal Reflections Inspired by the Last Words of Daniel Pearl” (Jewish Light Publishing, 2004), winner of the National Jewish Book Award.