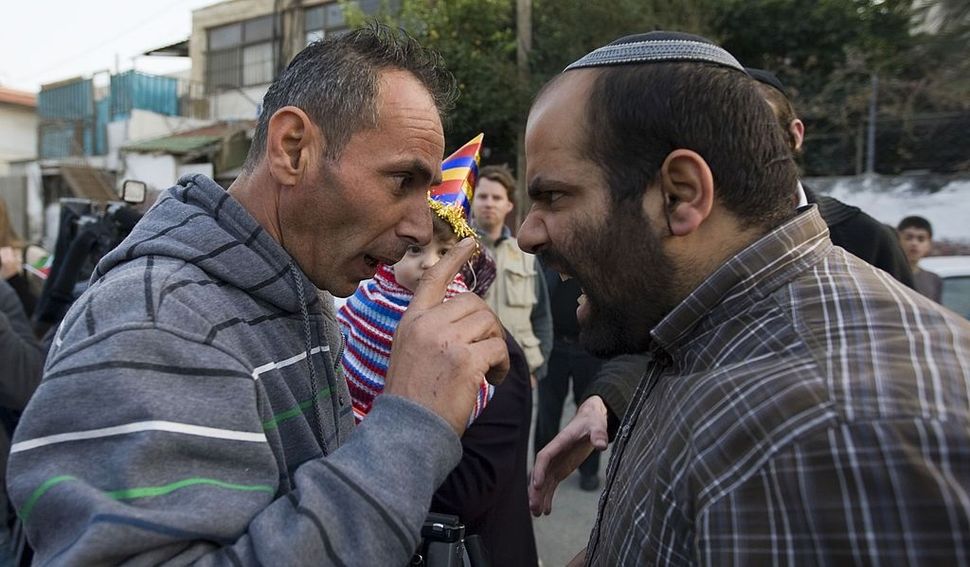 Comment boards for any article pertaining to the Israeli-Palestinian conflict can prove perilous. No matter who is badmouthing who as a bloodthirsty, racist terrorist, the partisans on both sides, while repeating tired lines ad nauseam, ironically employ the same exact rhetoric — with the exception of a few words and phrases. It’s a lot like Mad Libs, but instead of completing sentences to say “poopy cats like to eat Tabasco Sauce before going to fart fairs,” the partisan mad libbers launch ad hominem attacks in a quest to dehumanize the other.

Inspired by the comments on sites like Breitbart, the Jerusalem Post, The Times Of Israel, Mondoweiss, and The Forward itself, we present “Israel-Palestine Partisan Mad Libs,” with each side’s stock answers in italics:

It is impossible to live with (Zionists/ Arabs). The record proves this — look at (Deir Yassin/ Morocco), or (Umm al-Hiran/ East Jerusalem under Jordanian occupation) or any of the other times they’ve committed Lebensraum. And even if they let others “stay,” their religion, their entire culture demands the (gentile/ nonbeliever) be treated as second-class.

The fact of the matter is any offer to negotiate from these (Zionazis/Nazis) is a blatant sham, a trojan horse. They want to push ALL the (Arabs/ Jews) into the sea. They aren’t willing to settle. You have to understand that (Zionists/ Arabs) are like cancer. You can’t simply “contain” (Zionists/ Arabs) in one area. They will spread like locusts across our sacred fields, consuming everything in their path. It’s in their nature. (Europe and America/ The rest of the Middle East) wasn’t enough for them and their violent offspring. They want EVERYTHING — and their co-conspirators in (America / the United Nations) are glad to make it happen, with their (Rothschild/ jihadist) bankrollers footing the blood-soaked bill.

But the greatest travesty of all is how these (Zionists/ Arabs) so cravenly lie in their attempts to cleanse (Palestine/ Israel) of its true indigenous people. The truth is there were no (Zionists/ Arabs) in (Palestine/ Israel) 150 years ago. All of them came from (Europe/ other parts of the Middle East). Mostly all of these (“Jews”/ “Palestinians”) were actually (Khazar converts to Judaism/ Egyptians and Jordanians) that had no ancestral connection to (Palestine/ Israel), let alone (Al Aqsa/ The Temple Mount). Their descendants are mere squatters who kill by any means and lie with the (gun/ knife) in their hands.

The world needs to wake up before it’s too late, before the (Zionists/ Arabs) carry out their grand plans and implement one final solution. The (Zionists/ Arabs) smell blood, and they grab the first opportunity to rape and kill when no one’s looking. Unfortunately, the media and the world is too blinded by their hatred of (Palestinans/ Jews) to reveal the (Zionists’/ Arabs’) true intentions and actions displayed in plain sight. This perverse society even names its streets and buildings after terrorists. (Shlomo Ben-Yosef, Orde Wingate, Eliyahu Hakim, / Dalal Mughrabi, Muhannad Halabi, Abu Jihad) — I can go on and on listing the monsters these (fascists/ terrorist sympathizers) openly admire. And don’t forget their worship of the likes of (Ben Gurion and Yitzhak Shamir/ Arafat and the Grand Mufti) who (ethnically cleansed Palestine/ instilled anti-Semitism among the masses). The tree’s rotten from the apple down to its very roots.

(Zionists/ Arabs) don’t celebrate life. They thrive on death. Their existence is (racism/ anti-Semitism). Open your eyes! Smell the roses! It’s time to put an end to the pleasantries and negotiations rubbish. If we don’t remove the (Zionists/ Arabs) soon, it will be too late.