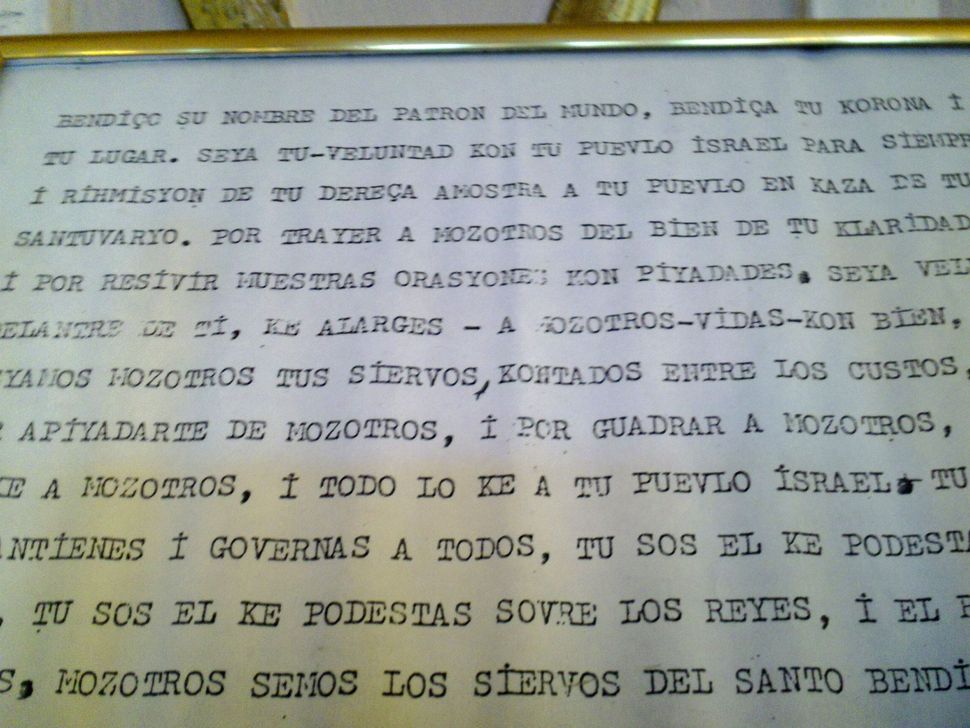 A Jewish prayer in Ladino in Izmir Image by Shmuel Aiello

Ladino, the language of Sephardic Jews, also represents a culture that has survived hundreds of years and is still relevant today. And more people need to know about it.

Ladino is a pan-Mediterranean language that crosses geographic, linguistic and cultural boundaries. Otherwise known as Judeo-Spanish, Ladino is the hybrid dialect that Jews from the Iberian Peninsula developed after their expulsion from the region in the 15th century. As they dispersed, they took the Castilian Spanish they had been speaking and combined it with bits and pieces of languages from the countries where they ended up settling. In this medieval Spanish, you can hear interwoven words of Portuguese, French, Italian, Greek, Turkish, Hebrew, Arabic and more. Today, UNESCO lists Ladino as endangered.

I grew up hearing the language from my grandfather’s family, who hailed from Monastir (now known as Bitola), Macedonia and Salonika, Greece. My family, like many others escaping the Spanish Inquisition, found refuge in the Ottoman Empire where they were welcomed. Their eventual journey to America, however, is not so dissimilar to many immigrant stories. They were escaping war, in their case, the Balkan Wars. When they arrived in America, they wanted to be American. For the most part they left the old country behind — save for some folk songs and special family recipes. I grew up clinging to and cherishing those because they were all I had. The language, sadly, was not passed down as my family worked hard to master English.

As I became increasingly interested in my family history, I understood there was a serious gap in my not having exposure to Ladino as a living language. Surely, if I, a proud Sephardic Jew, had trouble accessing my own culture, then others not of my background would never even know about it. So I asked myself why it was so important to care about a language on the brink of extinction.

Losing a language is losing a culture, and it’s a disservice to everyone, not only to those who are born with Sephardic heritage. Ladino was the primary language spoken by thousands and thousands of people throughout the Mediterranean for centuries. It was the first language of my grandfather and, until WWII, it was even the majority language in certain major European cities like Salonika.

When the Holocaust destroyed gigantic swaths of Ladino-speakers, there were exponentially fewer speakers to perpetuate the culture. But prior to WWII, the most significant event that altered the landscape of Jewish European demography was the Spanish Inquisition. In the more than 400 years between the two events, Sephardic life, including the Ladino language, helped shape European and world culture. Sephardic Jews escaping the Inquisition brought the printing press to the Ottomans, they brought philosophy and art, and they interfaced with and incorporated different cultures all along the route from Spain to the Middle East (and elsewhere where they settled).

Through centuries of geographic displacement and acculturation, Ladino, through music, storytelling, holiday rituals and more, served as a link of connectedness that kept Sephardic life alive. It sometimes amazes me that the same Ladino folk songs I grew up with were sung by others who grew up in Sarajevo, or in Sofia, Rhodes or Izmir.

But the Holocaust dealt a massive cultural blow to Ladino and its ability to survive. Few people are aware that Greece, where many Ladino speakers once lived, had the highest percentage of Jewish population exterminated than any other country involved in WWII. More than 80 percent of the Jewish population was murdered, and almost all of them were Ladino speakers.

Despite this, however, Ladino speakers and descendants are still united by our shared cultural history. Though small in number now, Ladino speakers (estimated to be approximately 150,000 with basic familiarity) are fighting to keep it alive. It is true that no one will be born speaking Ladino again as a first language, but that does not mean it’s not worth preserving. Ladino holds centuries of history and beauty, but it also means something very important for today. It still can hold deep relevance.

The language itself, as a hybrid of many dialects, epitomizes the blending of cultures in today’s globalized world. What other language has Hebrew, Arabic, Turkish, French and more all blended together? Ladino is not just a Sephardic language. Or a Jewish language. It is a world language that belongs to all of us, and it is a way, today, to bring us all closer together. With rhythms from the Arab world as Jews settled in the Ottoman Empire, or with lyrics that sound like old Spanish to any Spanish speaker, Ladino has a universal quality that is hard to be matched by other languages. Ladino connects Arabs and Jews; it connects Hispanics and Jews; and it connects Jews among themselves.

As Yiddish has had a renaissance of sorts in the last two decades, so, too, is Ladino having its moment. But we need to seize the opportunity before it is too late. We need to ensure that scholars can teach the language in universities (it is currently taught in four universities in the United States, and more abroad), that music and book festivals are open to including Ladino performers and authors, that digitization of Ladino literature is supported (for example, at the University of Washington, Seattle), that Spanish departments in secular grade schools include the Jewish story of the Spanish Inquisition in their lessons, and more.

Preservation is not only about looking backwards though; we must be creative in how we look ahead to keep the culture moving forward. Ladino is worth the effort.

Sarah Aroeste is a singer and songwriter who has devoted her career to Ladino cultural preservation. Her upcoming English/Ladino Holiday Album, entitled ‘Together/Endjuntos’, will be released this Fall.