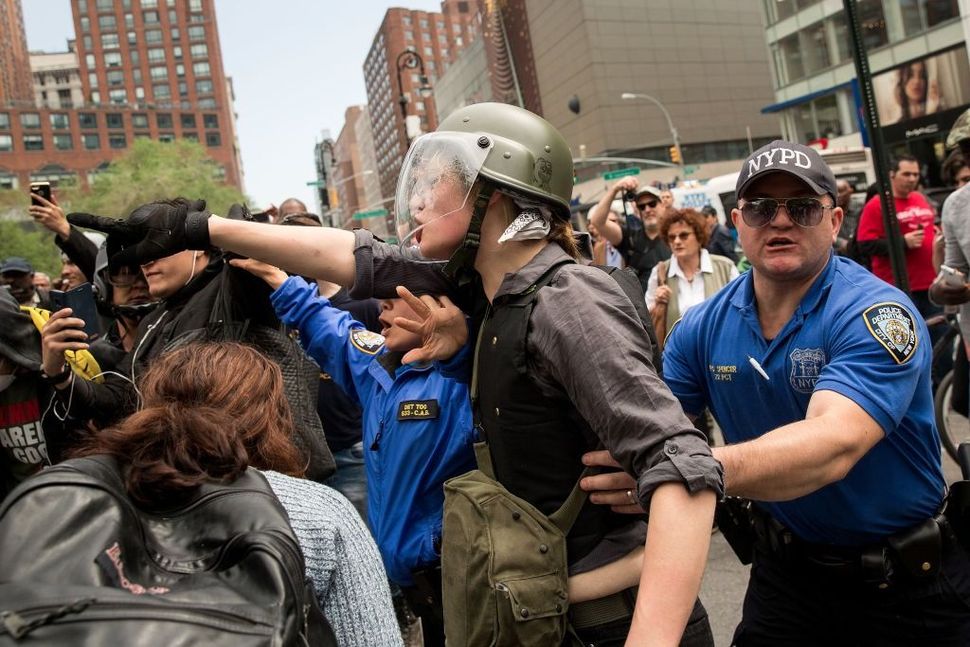 As president, Barack Obama had a catch-phrase that he often invoked at moments when America seemed to have shamed herself: “That’s not who we are.” He said it after the Sandy Hook massacre. He said it to defend academic freedom and to oppose Islam-bashing and anti-immigrant agitation.

His critics on the right hated it. They claimed he was trying to paint anyone who disagreed with him as un-American. But the critics were wrong. He was simply trying to rally public opinion around a moral center. That’s what we elect a president to do: articulate a vision, point in a direction and lead. Obama’s “who we are” was essentially a variation on Abraham Lincoln’s “better angels of our nature”: a wistful appeal to conscience.

No, the problem wasn’t that Obama’s little maxim was unfair. It’s that it was incorrect. If we have to keep repeating who we’re not, it’s probably time to admit it: That really is who we are. We’re a nation that guns down innocents in schools and office parks, humiliates strangers and begrudges the poor their succor.

Of course, we’re also a nation that sends its warships on far-flung disaster relief missions, walks on the moon and, at its best, shines a beacon of hope for dreamers around the world.

But we’re not always at our best, as recent events remind us. We got a harsh reminder on Wednesday, June 14, when a short-fused Democratic votary from downstate Illinois opened fire on a group of Republican lawmakers and aides playing baseball in a Washington suburb. He wounded five, two of them seriously, including the No. 3 Republican in the House of Representatives, before being cut down by Capitol Police officers.

The incident left much of the nation deeply shaken. Nothing focuses the mind like a calamity close to home, and this one struck at the People’s House, the heart of American democracy. Other contemporary assassinations — an abortion provider, a black teenager, a police officer, even a kindergarten class — could be blamed on shadowy, untouchable forces, be they gun lobbyists, fringe fanatics or anonymous social conditions. This time the victim and culprit alike were one of us — or all of us.

It touched off days of anguished soul-searching over the venomous polarization of our political culture, and the consequences of our mutual loathing. On talk shows and op-ed pages, around water coolers and dinner tables, Americans talked about the rancor that’s leeched out of our politics and infected our daily life. Political leaders from both parties, in a rare display of unity, called for Americans to change our ways, to temper our speech, to pull back from the brink. Presumably they meant themselves, though one can’t be sure these days.

As the sounds of remorse have intensified, though, it’s been hard not to notice a strange hollowness at the center of the tweet-storm. Our smartest thinkers, left and right alike, have been filling the ether with sober explanations of what’s gone wrong, what caused the great rift in our body politic. Mostly, what they’ve come up with is the obvious: that we don’t like each other very much anymore. But that only tells us what we already knew.

The question we need to answer is why. Why don’t we get along anymore? When did the breakdown start, and what caused it? Was it the hysterical Democratic hatred of Donald Trump, as some conservatives argue? Hysterical Republican hatred of Barack Obama? Newt Gingrich’s scorched-earth leadership as House Speaker back in 1995? Barry Goldwater’s radicalization of the GOP in 1964? The rise of social media? The 30-second television sound bite? The never-ending culture wars of the 1960s?

All those contain elements of truth. Well, most of them.

But they’re symptoms, not causes. To understand what’s happened to our political discourse, we need to look at some fundamental changes in our society in the last few decades.

Without going too far out on a limb, I think we can point to two big transformations that have altered the way we interact as members of a society. One is the rise in the last generation of what we might call certitude — certainness of belief, confidence that we know clearly what’s right and what’s wrong.

That’s hard to find these days. These days, the landscape most people see isn’t divided into right and left, but right and wrong. Compromise isn’t splitting the difference, but giving in to evil. What used to be known as tolerance is now called moral relativism.

If you’re looking for someone to blame for this calcification of our civic culture, you might start with Gingrich. When he became Speaker of the House, he changed the rules of the game and instituted the system by which we’re governed today: legislation is no longer an attempt to find a formula everyone can live with, but to win, to defeat and humiliate the other side. He introduced the idea of shutting down the United States government if his party couldn’t get its way. There was a time when the idea of paralyzing the United States government was called sabotage or treason. Now it’s called hardball politics.

In an earlier time, most people knew enough to doubt themselves.

But it might be more instructive to go back another few decades to the Ronald Reagan administration. Before Reagan, our political map consisted basically of Democrats who favored strongly progressive taxes and redistribution of income, and Republicans who opposed both. The middle ground was occupied by the belief that both sides had a point, and that everyone is entitled to their beliefs. Beyond the parties’ ideological boundaries were the radical fringes. One fringe favored radical redistribution and believed that low-tax/deregulation/free-enterprise policies were illegitimate and evil. The other fringe believed in radically reduced government, and saw high taxes and redistribution as evil.

Reagan managed by strength of will and a devoted base to move the entire map one step to the right. Today, the once-centrist idea that there’s a bit of wisdom in everyone has become the mainstream liberal view. The center consists of those who favor low taxes and deregulation, but concede that there is some value in preserving some of the old Democratic legacy, particularly in minority rights and a livable safety net. The right is what used to be called the far right: It starts with in-principle opposition to taxes and regulation, and believes that higher taxes and increased government intervention are by definition beyond the pale. As for the fringes, the far-left now pushes quixotically for the old Democratic agenda of progressive taxation and redistribution, and the far-right is taking up arms to shoot federal marshals.

But looking at the shift in the political center tells only part of the story behind our poisoned politics. The other part has to do with the technological revolution between the mid-1950s and the 1970s that threw out the old rules and created a truly global economy. It rendered the old values obsolete but left it to us to define new ones.

Those two decades saw the introduction of four transformative inventions. One was commercial jet travel, brought to the United States in 1958, which reduced an overseas trip from a days-long ordeal to a few hours. Another was the communications satellite, first launched in 1962, which allowed cheap, instant communication between continents, from phone calls to television broadcasts. The third was the silicon chip, developed in 1968, which transformed computers over the next decade from esoteric, room-sized monsters of limited power into tiny boxes with limitless power that anyone could put on their desks. The fourth, and arguably most important, was the shipping container, introduced commercially in 1955 but standardized internationally in 1968, which rapidly reduced the cost of cargo shipping to a fraction and replaced tens of thousands of dockworkers’ jobs with a single crane operator.

The combined effect of these four innovations was this: It became cheaper for a business to manufacture products in Asia and ship them here rather than to produce them here and pay American wages. In short order, these developments virtually eliminated the bargaining power of American workers and allowed business owners to increase almost at will their personal share of their company’s income.

A half-century later, the impact of the new technologies on the political economy -— virtually eliminating geography and distance as factors, erasing borders, boosting the speed and volume of calculations, transactions and communication beyond human comprehension —- has not been fully absorbed. It rendered centuries of law and custom obsolete. Everything from safety regulations to child labor and banking rules needed to be thoughtfully rewritten for the new era. But it wasn’t.

To understand the missed opportunity, consider how differently Europe handled the historic transition. They created a transnational political structure in a bid to cope with the transnational nature of the new economy. Particularly in the northern European countries, new rules were established for corporate governance, executive compensation, labor relations and job training, not to mention the generous safety net in most of Europe to cushion the transition for ordinary workers.

Contrast that with America’s approach. Just when government needed to adapt and learn how to regulate a world of new behaviors, we elected as president a former actor who proclaimed that “government is the problem, not the solution.” Rewriting the rules in vast sectors of the economy was left to the private sector rather than addressed democratically.

No surprise, then, that managers and investors saw their incomes soar, while everyone else saw their incomes gradually decline. With all that money to contribute while political finance rules were essentially scrapped, business owners sharply increased their influence on politicians’ decisions. Everything from tax rates to environmental regulations to drug patents was impacted, left to the owners to define the rules. It’s no wonder that so many Americans came to believe government was useless and corrupt. It was deliberately redesigned to be that way.

National Geographic put out a special issue in 1982, titled “The Chip,” explaining how the new microchip and its computing power would transform our lives. It predicted that the new technologies would allow economies to feed, clothe and house entire populations with far less effort, opening the way to universal prosperity, comfort and leisure. What the editors didn’t anticipate was that the new miracle device, as they called it, could just as easily give the owners of the new technologies the means to keep the new plenty for themselves rather than share it. As much as it could create widespread satisfaction, it could just as easily create widespread anger and resentment. Which it did.

And that’s how we got here.