Trump’s Terrible Personality Matters Even More Than His Terrible Policies 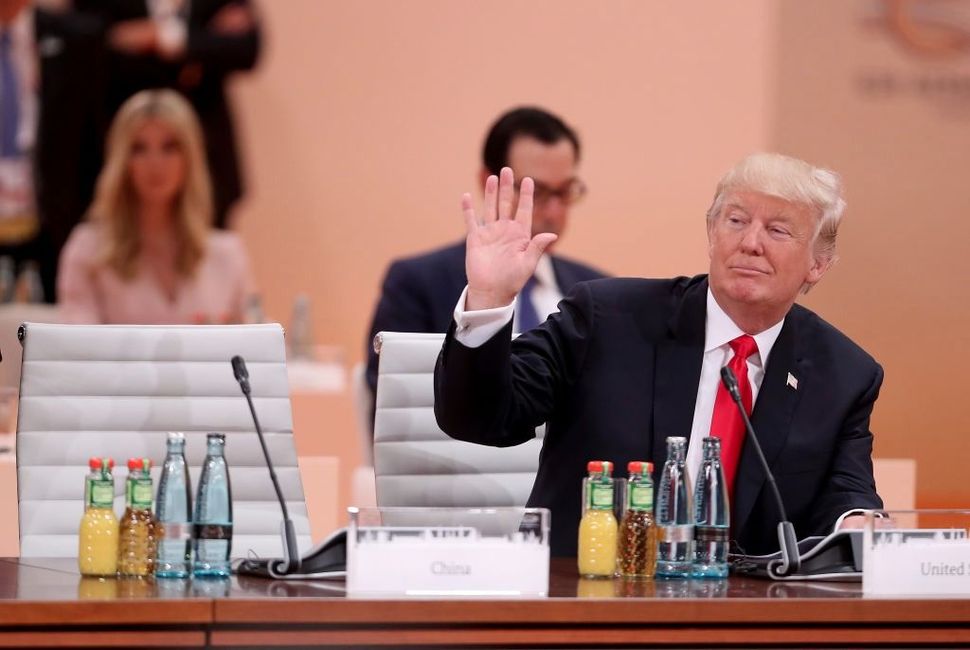 To be specific, it’s time to start talking about Trump’s threats. That is, about the dangers his presidency poses to the public welfare, both here and around the world. It’s pretty well established that he presents a jaw-dropping combination of poor impulse control, imperviousness to facts and plain cruelty. In anyone else, this cocktail would make for an interesting case study. But in Trump, it has real-life, global consequences, not least because it’s his finger on the nuclear button. We need, as the nation that elected him, to start naming the consequences, sorting them by likelihood and severity, and addressing them.

You can tell it’s time for us to start having this discussion because the rest of the world has started having it for us. In the past week alone, distress signals have gone up from two of our most trusted international partners. One was the G-20 group of the world’s leading economies. Their leaders got an up-close look at the new leader of the free world during their annual summit in Hamburg, and reacted with something resembling post-traumatic stress disorder. Statements in the aftermath suggest that they’re on the verge of renaming themselves the G-19.

The other was a rare op-ed essay (in Hebrew) in Haaretz by the elder statesman of Israel’s defense community, the famously tight-lipped former Mossad director Shabtai Shavit. Titled “The Dangerous New Middle East,” the July 8 essay enumerates the major threats that Israel faces in the new regional landscape, including the emerging Russia-Iran axis, Turkey’s imperial ambitions and the “impulsive, unpredictable” character of Trump’s leadership. Shavit outlines what he says are Israel’s two options for riding out the maelstrom. Neither is particularly appealing.

One option is to climb aboard the region’s Saudi-Egyptian moderate axis while the getting is good, accepting that the price of admission is Palestinian statehood under the Arab League’s peace initiative, and trusting the Saudis to keep the Palestinians in line. The other option is reliance on Trump’s America to have Israel’s back, and that’s not the good one. “The conclusion,” he writes, “is that one mustn’t rely on Trump.”

What’s striking about the two reactions to Trump is how little either one has to do with policy. Shavit barely addresses policy in his essay, except to note that the administration’s foreign policy is driven by profits and deal-making — weapons sales, trade deals — rather than commitment to the alliances and values that have defined American leadership for a century.

As for the G-20 nations, leaders have referred to Trump’s policies repeatedly during the summit and since, but mainly to note that he’s so consistently at odds with the international consensus on almost every score that his ability to lead is in question. America has become the odd man out in global policy deliberations that we’re supposed to be leading.

The point isn’t any specific policy disagreement. It’s that America isn’t playing its vital, century-old role as the chief manager of the global economy and leader of the world community. We’ve abruptly walked off the job, leaving the rest of the world leaderless. To the dozens of nations that depend on us, that’s not just disappointing — it’s terrifying.

There are two exceptions to this pattern. Trump’s policies on climate and trade are repeatedly singled out as the two policy issues worth mentioning — where the point is the specific policy. That’s because in those two arenas the Trump administration is actually capable of — and apparently intent on — single-handedly bringing catastrophe on the rest of the world.

In one case, the administration is toying with decisions that could ignite a global trade war, possibly sliding us into worldwide recession. Billions could end up suffering because of the Trump administration’s economic recklessness.

In the other case, the administration appears bound and determined to stop any American effort to reduce its carbon emissions and help slow the rise of global temperatures. Under Trump, one-fourth of the world’s economy — that’s us — will be unilaterally quitting the effort to keep temperatures at a survivable level. We’ll be leaving the rest of the world to pick up the slack, abruptly shifting the task from formidable to Sisyphean.

We Americans, when we’re done laughing at Trump’s latest antics, tend to discuss his presidency in terms of politics as usual: whether he’ll fix or ruin the healthcare industry, whether he’ll pass a budget, how he’ll impact access to abortion or to the ballot box. Those are all worthy, even urgent questions. But they’re practical, not existential. They’re politics as usual, and Trump isn’t the usual politician.

One of the privileges of diplomatic journalism is the occasional opportunity to sit with European or Asian government officials over dinner or drinks and hear what they really think, off the record. There’s always a moment when the passion and conviviality suddenly disappear and your interlocutor starts to mumble and look down at the table, unable to articulate the magnitude of the moment. Under George W. Bush, it was about our reckless invasion of Iraq. Under Barack Obama, it was about our feckless inaction in Syria. Under Donald Trump, we’re learning, it’s about the fact that we elected him president.

We’ve saddled the planet with a commander-in-chief who doesn’t understand what the job entails and doesn’t want to find out. Who’s oblivious to the power of the president’s words and thinks he can say whatever he wants and it’s nobody’s business. Who doesn’t understand meaning of complexity, nor indeed of knowledge itself. Who thinks everyone is making things up all the time, so it’s not really lying if he does it too.

Several times a week, it seems, Trump does or says something that newly captures his utter inadequacy in a way that nothing previously could. The latest may never be topped: his proposal, on returning from the G-20, that America and Russia set up a joint “Cyber Security unit” to ensure that “election hacking, & many other negative things, will be guarded and safe.”

On one hand, this may prove that he wasn’t in on his aides’ alleged collusion with Russian intelligence. If he were, he’d see the embarrassing stupidity of proposing a system to guarantee Russia steady access to our national cyber-architecture. On the other hand, he did say it — though he backed away from it 12 hours later.

If anyone else in the world had suggested this with a straight face, we’d be laughing our heads off. When the president of the United States says it, it’s time to be afraid. Very afraid.

Trump’s Terrible Personality Matters Even More Than His Terrible Policies