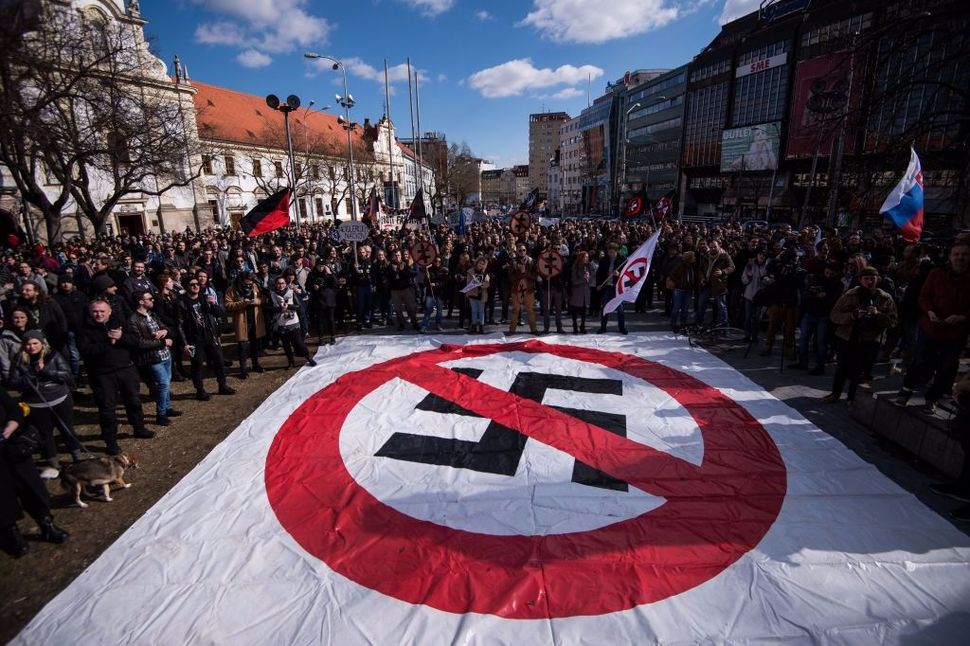 The question isn’t really who has called someone else a Nazi, but who hasn’t. After decades of work educating young people about the awful history of the Nazi regime, we now reside in a world where every 7th grader (including myself, once upon a time) calls their teacher a Nazi, and where literally thousands of different Adolf Hitler-related memes pollute the internet. Nazis have penetrated our everyday rhetoric so deeply they are used in the silliest of ways and most serious of political discussions. People compare things to Nazis so often online that there’s even a concept — Godwin’s Law — to describe the phenomenon where “as an online discussion grows longer, the probability of a comparison involving Hitler approaches 1.” For better or for worse, Nazi comparisons are here to stay.

So when is it appropriate to make the comparison?

The rise of Godwin’s Law has given way to the Dodd Corollary, which states that the first person to invoke Nazis in a debate automatically loses. Yet while the vast majority of Nazi comparisons are lazy rhetorical analogies, that doesn’t mean all Nazi comparisons are invalid.

Fairfield University professor Gavriel Rosenfeld, whose most recent book, Hi Hitler!, investigates the normalization of Nazi Germany through social discourse and online forums, believes that comparisons to Nazi Germany can be okay — so long as the comparison balances substance with rhetoric.

“A good comparison is one that stresses similarities but also emphasizes differences,” he said. “One problem with the concept of comparison today is it’s a euphemism for equation. To compare two things is not necessarily to equate those things. However, most people don’t give the comparer the benefit of the doubt because they’re assuming the comparer is only interested in stressing similarities.”

Nazi Germany is not some anomaly of human history. It was a society that gave in to extreme intolerance and authoritarianism, but in doing so, it merely placed itself at the far end of a chauvinistic spectrum that all societies occupy under a nation-state model. Any of our social, political or cultural actions can resemble the spirit of the Nazis. What is important to discern in comparisons are not only the similarities, but also the differences — and ensure they remain as such.

The foremost comparison made at the moment, of course, is Donald Trump and the alt-right. It’s fair to argue that the xenophobic sentiments of “America First” resemble the spirit of Nazi fascism — especially considering the term’s fraught origins from that time. Trump’s promotion of violence in rallies and on Twitter parallels the Nazi ethos, as do his hypermasculinity and misogyny. Trump’s delighted denunciation of “fake news” doesn’t sound so different from Nazi propaganda minister Joseph Goebbels’ excoriation of the “lügenpresse,” or “lying press.”

But it’s essential to note these comparisons have its limits. “Being a male chauvinist pig doesn’t make you a fascist,” Rosenfeld points out. It’s insufficient to simply say there are similarities. Six months into Trump’s presidency, we haven’t descended into outright authoritarianism. There have not been any national crises like the Reichstag fire for Trump to use as a pretext to dismantle democratic institutions and civil liberties. Whatever attacks inflicted by Trump on our democratic institutions pales in comparison to what the Nazis actually accomplished shortly after gaining power. “We have a 200-year tradition of two-party democracy in this country, and that was certainly different from Germany in the years leading up to the Nazis,” said Rosenfeld. “Germany had a fraught experience with democracy, and many were happy to let it go.”

Unfortunately, our toxic political discourse only emphasizes the similarities when the differences can be essential in guiding our actions moving forward. But this era of extreme partisanship and zero-sum politics has turned balanced argumentation into a liability rather than a desired form of communication. If you’re a Republican who concedes the left has some valid points, you’re labeled a “RINO.” And if you’re a liberal offering respect for some conservative figure, you’re dismissed as a “corporate shill.”

The internet has only made the predicament worse. Our major communications platforms — Facebook, Twitter, Snapchat, even just texting — favor brevity over thoroughness, leading us to rely on bursts of text and images that can only convey quick, superficial meaning.

This culture lends itself perfectly to Hitler. It’s easy for us to pass along jokes about a man whose all-encompassing cult of personality turned himself and his movement into a meme decades before Richard Dawkins first coined the term in 1976. As Rosenfeld points out, Hitler possesses a stark aesthetic tailored for the internet — a brand name, symbol and ‘stache that transition seamlessly from the crowds of Germany into 4Chan forums. The brand is no longer Aryan supremacy, however — it’s shock value.

This inherently poses risks to our culture. “It’s not that people won’t pay attention to the political issues that are at stake,” said Rosenfeld. “It’s just that they’ll start believing the whole period of Nazi Germany is not worth learning about. They’ll start thinking Hitler is just a big joke, a punchline, or someone we can’t really take serious because so many abuse it. The legacy of the Nazis, it’s the kind of thing that discredits any historical analyses.”

The effect is twofold. Making grave comparisons to lesser-known historical events may fail to grab anyone’s attention, but the overuse of Nazism consequently makes it difficult for legitimate comparisons to be taken seriously. By calling everyone Hitler, we may not identify the Fascist Waldo of the bunch until it’s too late.

But where does that leave humor – particularly the dark humor that Jews have used since World War II itself to confront one of the darkest chapters of our history? Was it cathartic for Mel Brooks to make “The Producers,” or for Sarah Silverman to joke about number tattoos in her standup routines? Does it win us a posthumous victory? Or does it normalize nihilism?

Just like there is a way to make sincere Nazi comparisons in political and sociocultural discourse, humor can be a liberating force when done right. In Israel, friends of mine — grandchildren of Holocaust survivors — called bug zappers “Eichmanns” — in reference to the electric fences surrounding concentration camps, I learned. Such black humor isn’t simply based on shock value. It takes discomfort to directly confront the dark legacy down to its details. The greater the historical depth of a Nazi joke, the less abstract the era feels like — and so the less fungible our shared memory of it may be. So long as this isn’t exploited to go in the other direction and provoke hysteria, dark humor helps Jews cope with our history. By allowing smart, if biting, invocations of Nazi Germany, we aren’t shackled to solemnity. We refuse to become the cowering wizards who wouldn’t dare speak the name of Lord Voldemort. We can triumph in our freedom by remembering when we weren’t free.

Admittedly, it’s hard to shake the Hitler habit, whether for political or humorous purposes, because it’s the popcorn of modern discourse — easy, temporarily satisfying, but before you know it, you’ve consumed an excess pound of nothingness. What’s important when discussing such evil is to remember that Nazi Germany was a very specific society that emerged under very specific circumstances – though from an environment not entirely dissimilar from our own. Only then can “never forget” become not some political rallying banner, but a motivation to actually learn from history to confront that past along with our present — and where it could lead, and how.