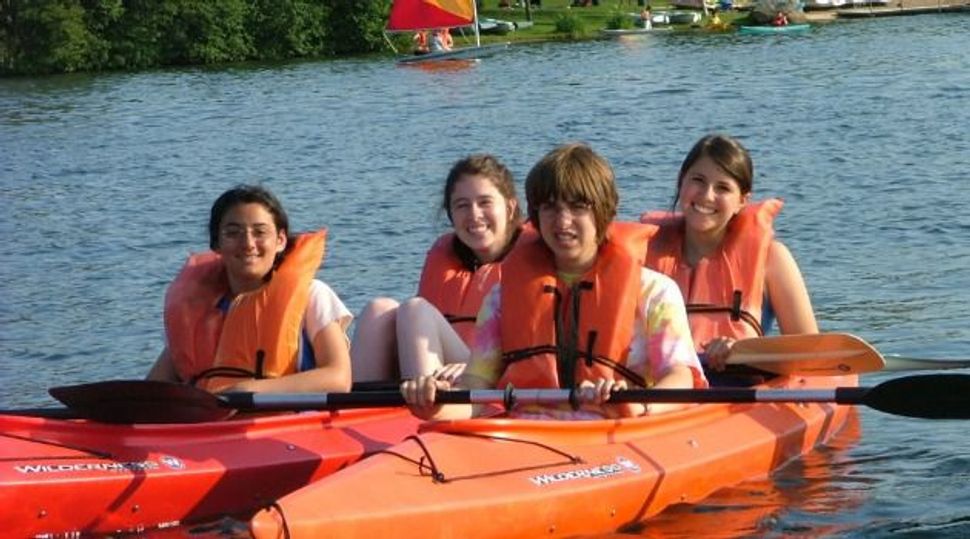 Every summer growing up, I had the least Jewish experience imaginable. Rather than joining the rest of my Long Island friends at Camp Pontiac or Camp Ramah, I went to the suburbs of Houston, Texas to stay with my Catholic cousins by marriage. I’d enter their house to find New Testament proverbs on walls and poke one eye open during grace at dinner. At the end of one summer in high school, we thought it would be funny to tell my mom I wanted to stay there in the fall and attend St. Thomas High School, their Catholic private school. Next thing I heard was the phone dropping and hysterical shrieking in the background.

All my older siblings went to summer camp, but by the time I came around, my parents said it was getting too expensive. My parents had actually met at summer camp — the fairytale American Jewish love story — but I never wondered if I missed meeting my wife-to-be at the water trampoline on the lake. No, I told myself, I was exposing myself to an exotic cultural experience of living rooms containing photos of Jesus alongside George W. Bush. While my friends enjoyed their cookie-cutter “wilderness” fun, my summers were unique.

So when everyone came back from camp with all their pictures of color wars and an unbeatable advantage at Jewish geography, my smug dismissals were unfailing. It all felt grossly incestuous and cult-like at the same time. I declared, oh, good for you, Sam, for playing Kenickie at your camp’s 47th rendition of Grease! And yes, you already told me all about how the girls from Bunk 23 went crazy after your Greased Lightning solo. No, I don’t care to hear the color war fight song you made up, Jake. I’ll bet it’s formulaic and lame. Yeah, Jesse, I’ll kick anyone’s ass in ga-ga (an assertion of mine proven wrong one too many times).

I was the lone renegade without a prescribed destiny, a mensch too good to play “Hallelujah” on guitar. But soon enough, I found myself separating from those campers even when summer ended. The experiences they had which reinforced their Jewish identity were all the stories I hated to hear about. Then, these campers joined BBYO so they could continue their make out sessions back home, and their bunk groups swam together at the JCC while I splashed around by myself, struggling to keep my head above water. It was a continuous line of Jewish institutions I forsook because it commenced in the land of sun tan lotion and freckles I so despised. I was a Jew, yes, but I was my own Jew with my own identity, I kept telling myself.

As I shied away from every institution that reeked of summer camp Jewishness, this cult became the Jews who lived as Jews, while I just so happened to be Jewish. During my encounters with this other tribe within the tribe, I confronted time and time again a sentiment described in a tweet revealed in a recent piece by Jewish summer camp expert Jenny Singer:

a jew who didn’t go to summer camp? are you even jewish?

Soon, my only Jewish places of refuge were Seinfeld and bagels on Sunday.

I don’t need them! I said. I’m unique (see a coping pattern here?). I’ll venture beyond the simulated wilderness of camp.

It’s not like I was watching “Passion of the Christ” by myself on a Saturday night, but it was a long, circuitous journey from hating on Jewish summer camps to the Forward offices. It’s a tale far too long to describe here, but it entails living in Palestine and later meeting some radical Jews who once roamed those camp trails. But now that I’ve rejoined those tribe members I long scolded, I am beset with the predicament apparently shared by the rebellious Jews like me who snubbed their nose at camp orgies (again, all credit to Jewish summer camp expert Jenny Singer on the find):

So allow me to say that above all our #FirstWorldProblems, life can be hard for a Jew who never fought a color war and lived to tell the tale. Our Jewish geography skills will always be mediocre at best, and our ability to have fun without alcohol or drugs inferior as well. But cheer up, stray Jews, for there’s a whole world out there that we may have seen which they never did, too. You never had the guiding light of mandated Shabbat services or Zionist song-singing to tell you how to be Jewish. We make our own destiny. We’ll always have that awkward pause at happy hour introductions, but dammit, there’s something utterly Jewish about being the outsider among the outsiders.