Why Does Sebastian Gorka Still Have A Job? 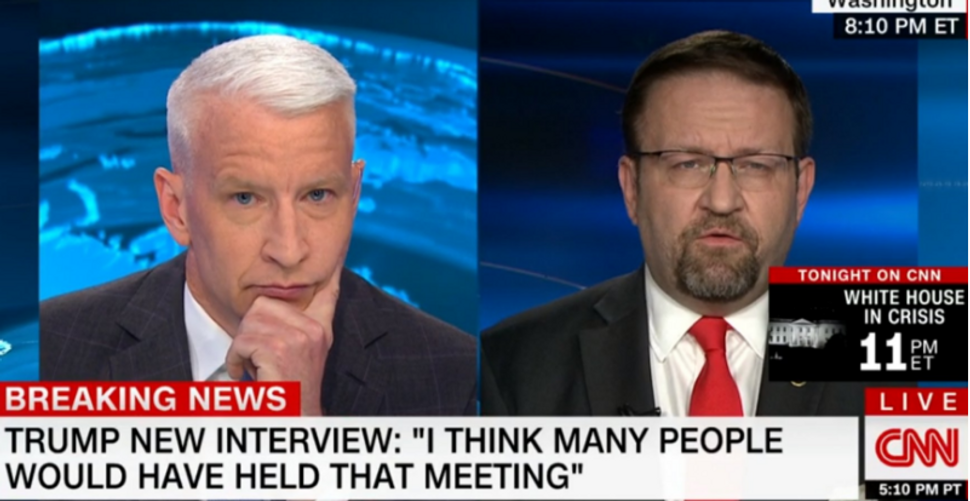 Sebastian Gorka is making the rounds of the dreaded Mainstream Media again. For a while there, the controversial deputy assistant to President Trump — who has well-documented ties to far-right, anti-Semitic groups in Hungary — was mostly speaking before friendly audiences in front of the camera or in person.

But in the last few days especially, he’s been on CNN insulting Anderson Cooper and on MSNBC bullying Stephanie Ruhle, all the while refusing to answer questions and trying gamely to change the subject.

Which leaves me with a question of my own: Why?

Why is Gorka, who works as a $155,000-a-year counterterrorism adviser, defending the Trump administration on the latest, damaging revelations regarding Donald Trump Jr.’s secret meeting last year with an emissary from the Russian government who promised him damaging information about Hillary Clinton?

Gorka wasn’t part of the Trump campaign; until he moved to 1600 Pennsylvania Avenue in January, he was national security editor for Breitbart and a contributor to Fox News, an acolyte of Stephen Bannon, his boss at Breitbart. He was also meant to be the one foreign policy analyst on Bannon’s Strategic Initiatives Group, which met an untimely end shortly after it was announced, having no budget or purpose even in the chaotic Trump White House.

Nonetheless, there is Gorka, contending that Trump Jr. unwittingly was drawn into a meeting with a person of bad faith and in the end, did nothing wrong. Of course, multiple investigations will determine whether that is an accurate reading of what happened, but it sure doesn’t seem credible to a whole lot of Americans.

Gorka might argue that he would rather not talk about these distractions, these fake bits of news manufactured by a failing media, and would instead prefer to discuss the fall of Mosul, the president’s trip to Paris, and other world events that supposedly play to his credentials and professional strengths.

There’s just one problem: He doesn’t appear to have the security clearance one would expect of a high-level adviser on such matters. The Los Angeles Times has reported that Gorka was unable to get clearance to join the National Security Council after he was charged last year with carrying a weapon at Ronald Reagan Washington National Airport.

The Forward has been asking the White House for months to clear up questions about Gorka’s security clearance. We asked twice again today, specifically pointing to the Times report and asking whether it was true or false. As in the past, there was no response.

The fact that the President’s son-in-law and senior adviser, Jared Kushner, also attended that meeting with Trump Jr., failed to report it, and then sought a secret channel to the Russians led New York Times columnist Nicholas Kristof today to argue that Kushner’s security clearance should be revoked immediately.

Gorka’s can’t be revoked if it was never issued. Then why is he doing his job?

Why Does Sebastian Gorka Still Have A Job?