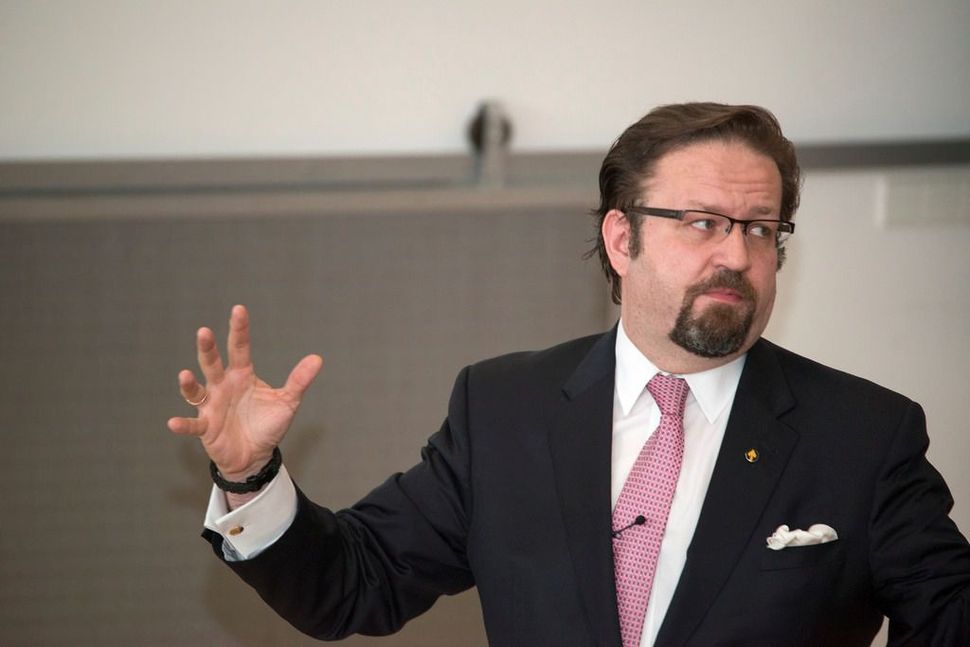 Since 2011, The Jerusalem Post has produced a popular conference in New York City featuring a bevy of Israeli politicians and military officials, along with American Jewish rabbis, communal leaders and thinkers. The conference, like the newspaper’s politics, leans right (and very male), but on occasion, genuine debate over policy toward Israel has taken the stage. Holding such a conference is a smart way for the Israel-based news organization to build its brand here in America.

As the Post explained in an April 20 story, the purpose of the conference, scheduled for May 7 this year, is “to open a window for our readers into Israel by connecting them directly with the politicians, government officials and IDF officers who make the news as well as the journalists who report on it.”

A recent addition to this year’s lineup certainly has been making news for all the wrong reasons. One of the key speakers will be none other than Sebastian Gorka, President Trump’s senior counterterrorism adviser who has decades-old, well-documented ties to a far-right Hungarian group that historically supported the Nazis and is on the U.S. State Department “watch list.” He founded a political party in Hungary that endorsed a paramilitary group known for anti-Semitism and threats to other minorities. That group was eventually banned in the country.

Three U.S. senators have called for an investigation into his background. At least 18 members of the U.S. House of Representatives demand Gorka’s removal from his powerful post. Even centrist organizations like the American Jewish Committee have urged President Trump to investigate his deputy assistant.

And the White House still won’t confirm whether Gorka, who did not become an American citizen until 2012, has the security clearance required to do his current job.

“I can’t understand that this kind of a person should work in the White House advising the president on counterterrorism,” Rep. Nita Lowey, a New York Democrat, told NPR yesterday.

And I can’t understand why this kind of person is being given a platform at a high-profile conference sponsored by a major Israeli news organization.

Here’s how the Post responded to my request for an explanation: “Like in previous Jerusalem Post New York conferences, this year the newspaper again invited the White House to send a senior member of the administration to address the conference. Deputy Assistant to the President Dr. Sebastian Gorka accepted the invitation and we look forward to hearing from him on Israeli-U.S. relations, as well as his views on various issues. The Jerusalem Post conference is a gathering where a wide variety of opinions are heard, and Dr. Gorka is one of many interesting speakers who will appear May 7 at the paper’s conference in New York.”

Since the Forward has been reporting on the troubling and unexplained chapters of Gorka’s past, the Post has published op-eds defending the president’s controversial aide, notably one by Jeff Ballabon and Bruce Abramson, two right-wing activists. Caroline Glick, a writer and editor at the Post, also denounced the Forward and defended Gorka in Facebook posts like this one.

The Post writers defend Gorka because they agree with his strident views on Islam and what he considers a global jihadist threat. Those views are beyond the mainstream of even conventional Republican thinking, but in the interest of free expression, they deserve a hearing at the Post conference and any other venue where debate is valued. My dispute is not over his political ideology. My dispute is over his qualifications, his alarming associations, his questionable past and his refusal to consistently explain it.

Until we know the truth about Sebastian Gorka, invite someone else to express his extreme worldview and share the stage with Jewish leaders. Right now, that’s not Gorka’s place.