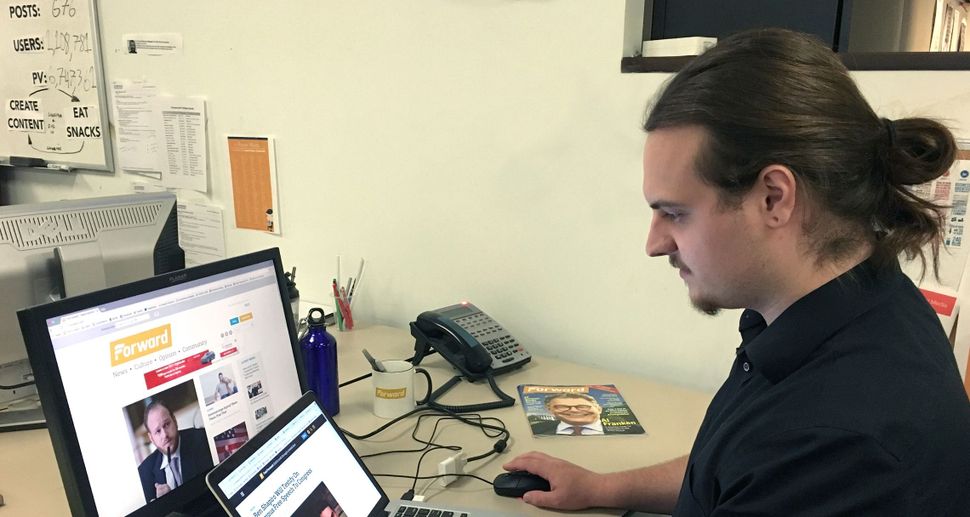 When I was first told that my internship program was placing me at the Forward, I was apprehensive, to say the least.

What would I, an atheist college student from Iowa whose experience with Jews was almost non-existent, have to offer to a Jewish publication that I had never heard of, never mind read? What kind of informed opinions could I give when my background was so decidedly un-Jewish, and when I was so unfamiliar with the people and culture about whom I was writing?

But the most rewarding experiences a person can have often come from exploring environments that differ, sometimes drastically, from one’s own. What one can learn from attempting to understand unfamiliar cultures is far more valuable than any lecture a college professor can give. And breaking down misconceptions often provides a jumping-off point for deeper questions lingering just beyond the surface.

In that spirit, here are four of the many things I have learned about Jews and Judaism from the Forward.

Jews are (not) white

Are Jews white? Put that on the list of questions I’d never thought about before this summer. My first week on the job was filled with a flood of op-eds, letters and blogs fiercely debating the whiteness of Wonder Woman’s Gal Gadot and, intrinsically, the whiteness of Jews. It’s a question that inspired my first man-on-the-street video for the Forward, and one that introduced me to the idea that Judaism is far more than a religion.

If Judaism were simply a religion, than the question would be irrelevant. As one tourist said to me in broken English, “If it’s a religion, it doesn’t matter the skin color.” But Jews are also an ethnic group that has faced discrimination and challenges of their own, though those challenges were largely independent from their perceived skin color. And that doesn’t even take into consideration the growing population of Jews of color. The question of whether Jews benefit from white privilege is a fascinating one that I’m still thinking about.

Judaism is not as simple as it seems

Growing up Catholic, my understanding was that most religions have a universal dogma. Sure, an individual may interpret scripture in various different ways, but a pillar of the Church was the collectiveness of belief. It’s what separates Catholics from Lutherans (or as my mother would call them, Catholic-lites), Presbyterians and all other denominations.

Naturally, I believed the same to be true for Judaism. I knew there was a difference between Jews who dressed in all black and grew beards better than I ever could, and those who looked liked “everyday people,” but that was about it. Terms like Orthodox, Reform and Conservative were foreign to me, as were the various differences between them.

I imagined, rather foolishly, that all Jews believed the same thing. There may be, I thought, disparities between individual belief and some healthy theological discussion, but I could not have imagined how much Jewish belief can vary.

With issues like intermarriage, mixed-gender prayer and all things Israel fiercely dividing the community, I realized that Judaism is far less universal than I had previously thought.

It was shocking to realize how different each denomination can be from one another. Instead of a “Catholic universality,” where individual belief varied but the tenets were same, I realized that, while the premises of the Jewish faith may be the same, the conclusions can vary drastically.

Community matters, even to non-believers

When I left the Catholic Church as a teenager, I mostly left the community that came with it. Although I still attended a Catholic high school, I distanced myself from the church, and those in the church distanced themselves from me.

In short, when the faith was gone, the church and I had nothing in common. I had no reason to continue to be a part of the community. But, with Judaism, that doesn’t seem to be the case.

It isn’t just a religion; it’s also a culture, an ancestry and a family. Rabbis are leaders of their communities, not just their faith. Synagogues and community centers are spaces for gathering, not just for worship. That secular connection allows for an interest in Judaism that transcends faith.

Although data from the Pew Research Center shows that Jews who don’t believe in God are less likely to be connected to Jewish organizations, those groups may be far more relevant to a Jewish atheist than, say, Catholic ones are to me.

Jews are involved in pretty much everything

Dig hard enough, and you can find a Jewish angle to any story. That’s a lesson I’ve picked up quickly here at the Forward. I never ceased to be amazed by the Jewish influence on music, art, culture and politics that hides just below the obvious. From ABBA to McDonald’s, the secret Jewish history of our world is vast. And while these stories serve as a way to highlight Jewish influence where it might be overlooked, it also helps to relate Jewish ideas to seemingly non-Jewish topics.

That knowledge has helped to ease my previous apprehension. Maybe my interests, my community and my history aren’t so un-Jewish after all. Perhaps there is a secret Jewish history behind the issues that I know best, one that has yet to be brought to light.

As I learn more and more about Judaism and Jewish culture, I realize that in many ways I still don’t know what I don’t know. But the more I learn, the more I feel like I am at least a small part of the community. Perhaps, even as a non-Jew, I can offer a viewpoint that matters.