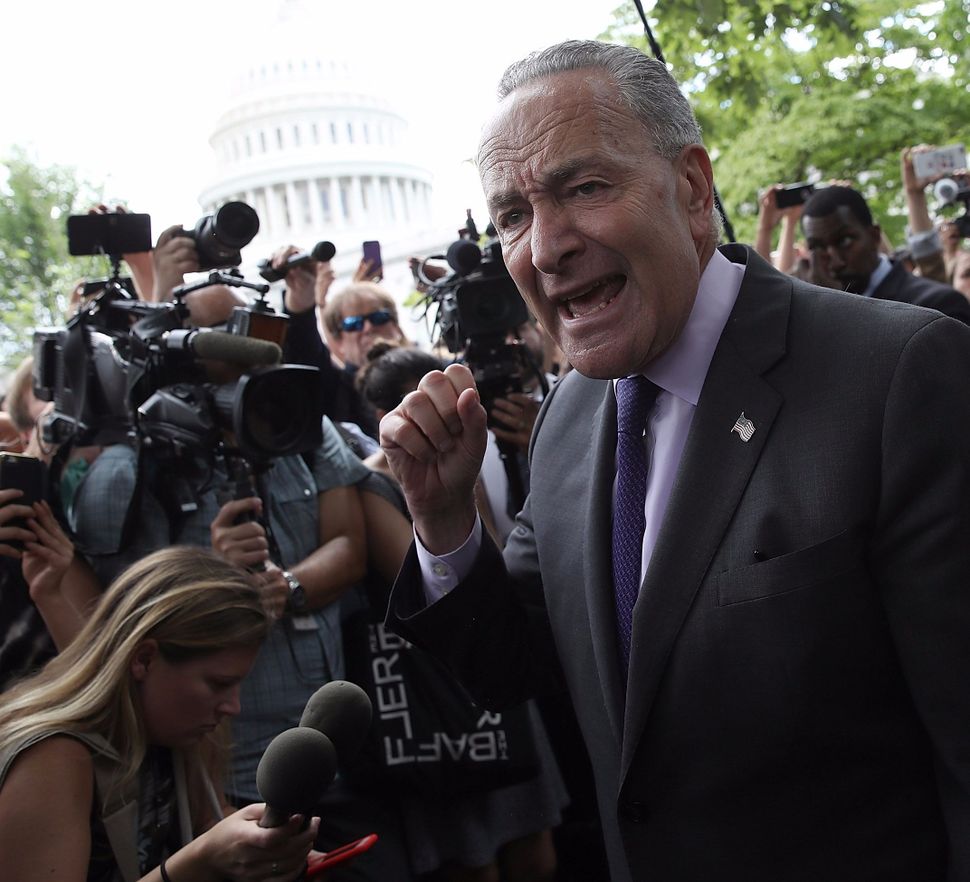 Every pundit from Boston to Seattle will tell you the state of the Democratic Party these days: It’s bad. The party got its clock cleaned in the 2016 general election and, even in the full-blown midst of the “Resistance” movement against President Donald Trump, it’s now lost four straight special elections around the country. After spending every day since his election raging against the president, Democrats have failed to offer little more than resistance to his agenda.

Now, Chuck Schumer and Nancy Pelosi, minority leaders in the Senate and House of Representatives, respectively, aim to offer voters something different: A Better Deal. Party leaders are hopeful this message will create a tidal wave of support, siphon off Trump voters who abandoned them and go a long way in retaking the House and making gains in the Senate in November of 2018.

But there’s one problem. This new message is a spit in the faces of some of the party’s most loyal and important voting blocs — people of color and women.

You can hear it in the language Schumer uses (almost fawningly) over Trump’s victory and how the Democrats plan to emulate it. “President Trump campaigned on a populist platform, talking to working people — that’s why he won,” the senior Senator from New York said. “Democrats will show the country we are the party on the side of working people.”

Just who do Schumer and his party believe the working class and its people are? While it’s true Trump received his electoral victory by turning the tide against Democrats in Midwestern rust-belt states, and it’s true Democrats were abandoned by an alarming number of people that typically swing their way around election time, those people were largely white.

Barack Obama and Hillary Clinton got the largest number of votes in the history of presidential elections. And a quick look at the numbers shows that people of color, women and young people propelled those historic campaigns. Though Clinton lost, she won the votes of women overwhelmingly, particularly black women, who gave her her fully 94% of their votes. 94%!

Hundreds lined up to pay respects at the grave of Susan B. Anthony on Election Day 2016 in the hopes of seeing a woman elected president. Historic numbers of young people, black people, and Hispanics as well as other minorities participated in both the 2008 and 2012 elections to propel Obama to the White House.

This past week, Schumer, Pelosi and even progressives like Elizabeth Warren threw that by the wayside.

The party has decided its main focuses are raising the minimum wage to $15, focusing on antitrust laws and lowering the cost of prescription drugs. All are admirable causes. But there was barely a peep about issues Democrats have historically put at the forefront of their agenda.

Warren, for instance, spoke of the economy being broken and wanting a better deal for the American worker. She didn’t utter a word about protecting the rights of women to choose. Abortion rights groups like Planned Parenthood and NARAL received no shout out. Barely a year after a historic campaign to elect a woman president, the Democrats have sidelined women’s issues to continue their obsessive pursuit of white working class voters, believing it is their path to electoral victory.

Schumer for his part railed against monopolies and made a call for enforcing antitrust laws, and Senator Mark Warner spoke of economic anxiety (a phrase bandied about to excuse Trump voters for supporting a man with harsh and negative rhetoric). And again, while these are admirable causes, I couldn’t help but notice another crucial topic that wasn’t being discussed: voter suppression.

Through voter suppression, Republicans are destroying previously high turnout by blacks, other minority groups and young people around the nation. While other groups are combating the issue, it apparently just isn’t a priority of Democratic Party leaders. It’s even more shocking considering the losses of Clinton and senate candidate Russ Feingold in Wisconsin, a state where The Nation’s Ari Berman suggests 200,000+ voters had their vote suppressed in the 2016 election. The vast majority of them were people of color.

Even more curious was the backdrop of the Dems’ message “unveiling” event this week. Nationally recognized Democrats from both chambers flocked to the small, deep red and deeply conservative town of Berryville, Virginia on Monday. With a population of less than 5,000 the town is about 85% white. Its conservative base came out to deride the quirky liberal politicians who were making a pitch to them. Many sported signs such as “Still Pelosi” and quipped about the failure of the Democrats thus far in the Trump era.

After this event was planned and while it was happening, several Democrats across the nation scratched their heads. It had echoes of party Chairman Tom Perez’s “Unity Tour” this past spring, a tour that drew the ire of many black women, who felt as if Perez and the Dems were ignoring them and making a key mistake, putting them on the path to new electoral losses.

Even Donna Edwards, a former U.S. Representative from neighboring Maryland lamented the current messaging of the Democratic Party, saying it’s one in which black women in particular have to shout for attention. She implored the party and its followers to listen to women like her, using the hashtag #askablackwoman, while retweeting a fellow Twitter follower’s message that Schumer is “confused.”

If former party leaders who are women of color feel left out by the Democrats’ new message, how must the everyday Democratic voter feel?

For some, including this writer, it felt like the Democrats are putting in motion the plans they’ve talked about since the election. The Democrats seem hell-bent on continuing a rabid obsession with the vague working class voters and mostly white constituents in rust-belt states and rural towns while throwing women and minorities by the wayside.

Charlie Townsend is a writer based out of Cleveland who works primarily in politics.