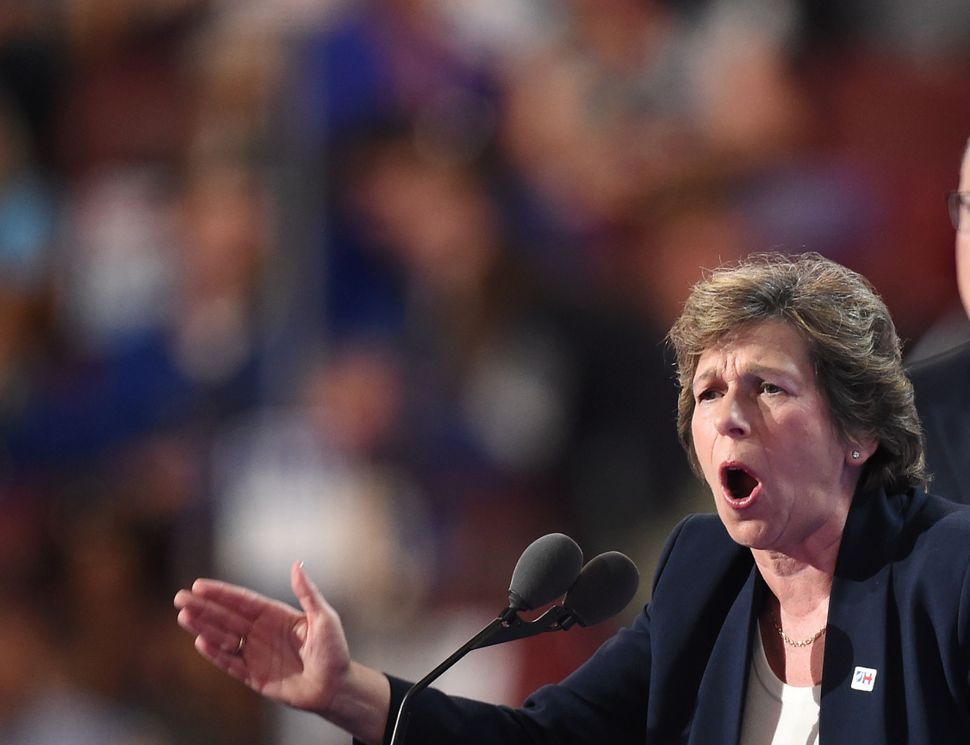 A recent New York Times column by Frank Bruni discussed a surprising finding: lesbian women have surprising electoral success in the United States. The Victory Fund, which supports L.G.B.T. candidates, crunched the numbers and found that lesbians win 70 percent of their races.

With the gay future ever so bright, here are several Jewish lesbians we wish would run for office.

Achtenberg was one of the earliest visible LGBT politicians in the U.S. She served in the Clinton Administration as Assistant Secretary for Fair Housing and Equal Opportunity and as Senior Advisor to the HUD secretary. Under President Obama, she was Commissioner of the U.S. Commission on Civil Rights. Achtenberg published in 1985(!) the book “Sexual Orientation and the Law.” With gay rights under fire of late, will this trailblazer make a return to office?

A civil rights attorney by trade, Kaplan is a Democratic City Councilmember in Oakland. Her city council work includes efforts to balance the city’s budget by raising taxes on medical cannabis rather than the tried-and-tried-again Republican approach of cutting city services. Kaplan ran for Oakland’s mayoralty in 2010 and 2014, placing 3rd and then 2nd. 2018 isn’t too far off for the ascendant Bay Area councilwoman, however.

A professor at UC Berkeley since 1993, Butler is a leading voice on third-wave feminism and queer and literary theory. Having chaired the International Gay and Lesbian Human Rights Commission, Butler’s activism has taken her to Occupy Wall Street camp outs and teach-ins opposing Israeli policies. Butler, who first coined the term “gender performativity,” would be a fascinating addition to a political scene wrought with gender inequalities so profound that a dozen white men are put in charge of women’s healthcare.

Trump liked to boast on the campaign trail that he’s made some of the best deals under the toughest negotiations. Randi Weingarten has the credentials to back such claims up. A deeply religious Jew, Weingarten was first a lawyer and then a teacher before delving into union politics. She played hardball during negotiations with Mayor Giuliani as president of the United Federation of Teachers, and she is now the president of the American Federation of Teachers. With insider knowledge and expertise on pressing education issues like school choice and standardized testing, Weingarten has the profile to become quite the heavyweight in both policy and political realms.

Eger is a leading lesbian rabbi in the Reform movement. After coming out as gay in a 1990 LA Times story, Eger founded Congregation Kol Ami, a synagogue devoted to serve gay and non-gay Jews alike in Hollywood. She also helped found the Religion and Faith Council of the Human Rights Campaign. She is the immediate past president of the Central Conference of American Rabbis, and was the first openly gay person to lead the largest and oldest rabbinical organization in North America.

Serving as Harvey Milk’s 1977 campaign manager, Kronenberg’s legacy in LGBT politics is already cemented. But her behind-the-scenes political work has continued in San Francisco ever since, now as an administrator in the city’s Department of Public Health. As the long-time chair of the San Francisco Board of Supervisors’ Single Room Occupancy Task Force, she may have a word or two to say about the so-called “bathroom bills.”

Gessen is a noted Russian journalist who for years was “probably the only publicly out gay person” in all of Russia. After the release of her book, “The Man Without a Face: The Unlikely Rise of Vladimir Putin,” Gessen permanently moved to the United States in 2013 after facing threats from Russian authorities. Gessen has seamlessly transitioned to critiquing autocratic figures in America now, providing a very dark outlook on the eve of Trump’s inauguration in an interview with Samantha Bee. Now a U.S. citizen, will Gessen take political matters into her own hands?

A performer and bisexual by trade, Glazer’s show “Broad City” humorously broaches topics Congress deals with in far more boring ways, like sexuality, race, religion, cosmopolitanism, and lots and lots of weed. This is the same woman whose show will be bleeping Trump’s name next season. We know what the 18-34 demographic would say to a Glazer candidacy: YAAAAAAS KWEEN.

Correction: An earlier version of this story mistakenly claimed that Denise Eger was still the president of the Central Conference of American Rabbis