Charlottesville Shows That Nazis Have More Rights Than Black People 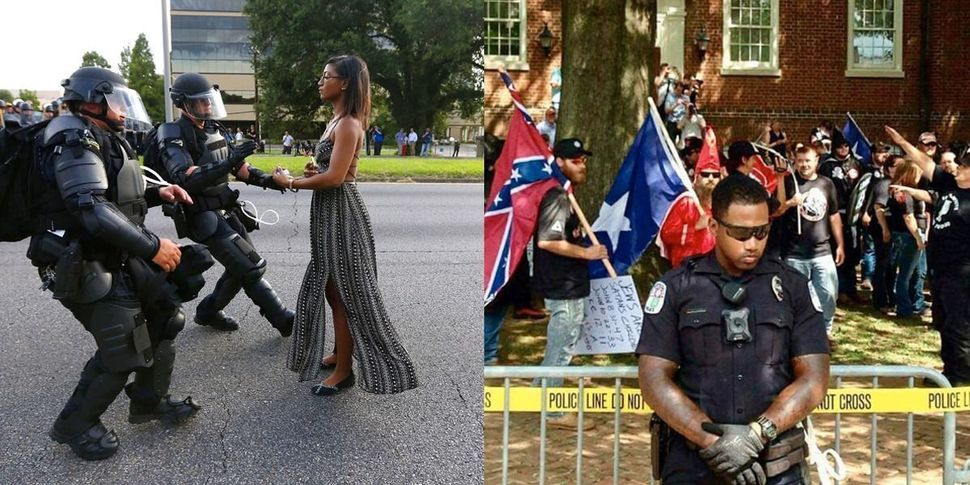 It took me a while to figure out what exactly was most upsetting about the weekend’s events in Charlottesville. Beyond the fact that a person was killed and many were injured by a group of white supremacists, and beyond the fact that there are Nazis marching in the streets of America in 2017, something was revealed in Charlottesville that was even more upsetting. On Saturday, we learned that the civil rights of Nazis are more protected than those of people of color.

In Charlottesville this weekend, Nazis showed up and became violent while virtually every institution failed counterprotestors, and especially the black folks who were targeted. The cops did nothing to stop Nazis from committing violent hate crimes. Our government utterly failed to protect people from racial terror.

For two days straight, cops stood by and did nothing as white mobs attacked counter-protesters. Yet when Black Lives Matter peacefully protested in Ferguson, they were met with dogs, semi-automatic rifles, tear gas and tanks.

These white supremacists showed up with their own militia. Can you even imagine what would have happened if black folks showed up to protests in Baton Rouge with a militia? Can you imagine what kind of force they would have been met with?

But despite how horrific these thoughts are, they are not that surprising. While many people have expressed bewilderment about the events which occurred in Charlottesville, I was honestly not even shocked. While Trump’s rise to power did not create the racist element that we saw in Charlottesville, it sure did embolden that element by normalizing the type of racism which was previously only expressed within safe spaces for white people.

While we have seen our share of racial tension under past Presidents, what happened in Charlottesville was different and dangerous. When Trump was asked to make a statement about the events which occurred in Charlottesville, he not only refused to outright condemn the white supremacists who showed up to engage in a campaign of violence and terror, but he tried to muddy the waters by saying that the people who came to protest the white supremacists were also at fault.

If the government will not protect us on the local and federal level, who will? There will supposedly be an investigation done by the DOJ, but I think that we can all safely say that this will probably be nothing more than a dog and pony show.

Let’s face it folks — we have regressed to the days where the federal government will not only tacitly sit by idly while white mobs attack people of color and protesters. We now have people such as Steven Bannon and Steven Miller who will go as far as to enable these mobs.

The cold hard truth is that many of the institutions which are tasked with protecting our rights as Americans have abandoned us – while they continue to protect the white supremacists who live in our midst.

[This piece was penned by @Freeyourmindkid, who has been threatened by white supremacists in the past and for issues of safety has used a pseudonym.]

Charlottesville Shows That Nazis Have More Rights Than Black People