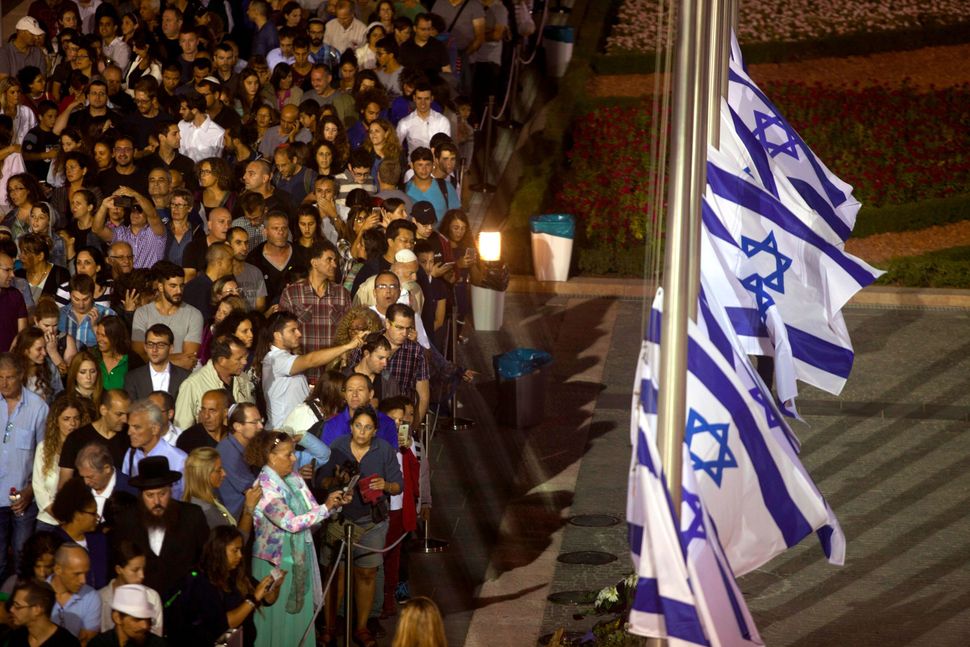 It was offensive enough when, in the aftermath of the deadly events in Charlottesville, Virginia last weekend, the white supremacist leader Richard Spencer called himself a “white Zionist,” comparing his form of Nazism to the belief in a homeland for the Jews.

It was even more distressing to read on these pages a supportive rendering of that assertion by Naomi Dann of the radical group Jewish Voice for Peace.

We work hard to reflect a range of American Jewish opinion, which is why the piece and reaction to it was published. The free flow of ideas is to be cherished. But when a Jew even hints at comparing Israel to Nazis, it must be denounced.

The argument that Zionism is akin to Nazism is not new, and it’s never been correct. Its related equation – that Zionism is racism – was codified by the United Nations when it passed Resolution 3379 in 1975. Though hardly Israel’s best friend, the international body later came to its senses and overwhelmingly rescinded the resolution in 1991.

But, like the anti-Semitism at its core, this ugly syllogism will not die, resurging at times of anxiety and anger, and fueled by a willful disregard for what Zionism and Nazism actually represent.

This wasn’t the first time that Spencer and his ilk have sought to create some sort of common ground between their extreme white nationalism and Zionism, but the supposed affinity is based instead on quicksand.

The version of Nazism that Spencer espouses, even if it’s dressed up as a kind of perverted affirmative action for white people, is by its nature exclusionary and racist. It is propelled by grievance and hate. It views ethno-nationalism as a zero-sum game, where one group’s power automatically diminishes another group’s status.

The American ideal has always aspired to the opposite — a notion of nationalism that expands to include rather than restricts to reject. Of course, this country has fallen short of the ideal from the start, but that doesn’t obviate the progress that’s been made and the need for us to keep trying for more.

Zionism, too, is an expansive aspiration, asserting that Jews, like all other peoples on earth, deserve the right to govern themselves in their ancestral homeland.

There is an undeniable tension between privileging Jews in the State of Israel and the rights of other religious and ethnic groups. That tension is inherent in any nationalist enterprise.

It’s why so many countries erect high barriers to acquiring citizenship – in Austria it can take up to 30 years – and others informally enforce social and cultural norms to maintain the hegemony of the dominant class.

It’s also why other nations have strict religious tests for citizenship and leadership, to privilege one group over another. Every citizen in Saudi Arabia, for example, is considered a Muslim, and conversion to Christianity is punishable by death. In 30 countries, mostly in the Middle East and North Africa, the head of state by law must have a particular religion.

Is that racist, too?

It’s unlikely that a non-Jew will become head of state in Israel anytime soon, given the country’s overwhelming Jewish majority, but Arab citizens serve in the legislature, on the high court, and in many other positions of civic responsibility. This has not prevented the current government of Benjamin Netanyahu from following policies that discriminate against non-Jews, or from perpetuating the occupation of Palestinian land and the denial of Palestinian sovereignty.

That such policies are done in the name of Zionism is painful, a perversion of the Zionist ideal. It is something that all Jews must reckon with. But the imperfections of reality do not negate the underlying fact that Zionism is not inherently racist and can — and, in fact, does — exist side-by-side with democracy.

For Dann to write that Spencer is “holding a mirror up to Zionism and the reflection isn’t pretty” is especially perilous in the current political climate. The intimidating display of Nazi slogans and symbols in Charlottesville, Virginia, legitimized by the shocking statements of President Trump, are a chilling reminder that even in America, Jews are at risk simply because we are Jews.

It ought to strengthen our sense of solidarity. It ought to persuade us to recognize our shared vulnerability, even in the face of our considerable, and continuing, internal differences.

For a Jew to compare Israeli policy that she finds offensive to Richard Spencer’s ideology is more than troubling. It’s also not true. And truth is too precious a commodity these days to ever be squandered.