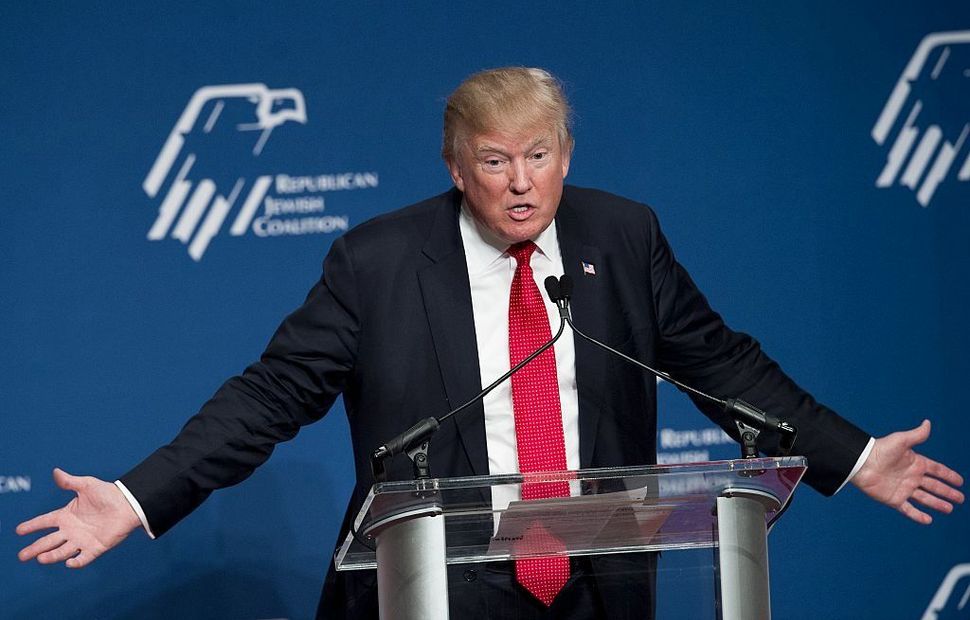 In a milquetoast statement released on August 16, the Republican Jewish Coalition at last revealed itself to be living in complete delusion.

The statement was released after Donald Trump first blamed “many sides” for the violence in Charlottesville, and then issued an aide-written statement condemning racism, only to double down on his original position, stating that in fact there were good people marching in the white supremacist rally.

The chairman and director of the RJC said:

The Nazis, the KKK, and white supremacists are dangerous anti-Semites. There are no good Nazis and no good members of the Klan. Thankfully, in modern America, the KKK and Nazis are small fringe groups that have never been welcome in the GOP. We join with our political and religious brethren in calling upon President Trump to provide greater moral clarity in rejecting racism, bigotry, and antisemitism. As representatives of the Party whose founder, Abraham Lincoln, broke the shackles of slavery, and of an organization with many members who experienced firsthand the inhumanity of the Nazi Holocaust, we state unequivocally our rejection of these hatemongers — you can expect no less from the Republican Jewish Coalition.

While the Washington Post and others have described this as a break with Trump, the statement is actually the opposite; it is a cowardly failure to recognize the political reality of 2017, in at least four ways.

First, the statement understated Trump’s position by a country club mile. How is Trump supposed to provide “greater moral clarity” when his contradictory statement provide no clarity at all? How can this statement not specifically denounce Trump’s shocking claim that there were good people in the crowd in Charlottesville? If this is a break with Trump, it’s a hairline fracture.

Second, the statement is deluded in maintaining the view, now at least a year out of date, that white supremacists are merely some fringe group. Even with Steve Bannon gone, there remains a fascist sympathizer and perhaps neo-Nazi sympathizer, Sebastian Gorka, in the White House. 9/11 Truther and conspiracy theorist Alex Jones has been lauded by Trump as “amazing.” Trump may not himself be an anti-Semite, but he is surrounded by them, supported by them, and embraced by them.

It is also misleading at best to tease out the Klan and Nazis specifically from the “alt-right” more generally, which is anything but fringe today. To be sure, conservatives of many stripes have denounced them and denounced Trump’s non-condemnation — in far clearer terms than the RJC’s. This is not about Democrats and Republicans. But to claim that white supremacists are merely a fringe group is a kind of willful denial of the political map today.

Which leads to the third delusion in the RJC’s statement. The fact is, 67% of Republicans approve of how Trump “handled” the Charlottesville incident. Moderate Republicans, which includes most but not all of the RJC, simply refuse to acknowledge that they are a small minority within their own party. They are the smallest of the GOP’s three main factions: smaller than Christian Conservatives (who supported Trump/Pence and now are reaping the benefits), and smaller than the so-called “White Working Class,” which has long supported anti-elitist, sometimes anti-Semitic, and usually anti-black policies.

The Republican Party of which the RJC speaks is a fiction, especially now that more moderate candidates have been roundly shellacked by Tea Party extremists and, of course, Donald Trump himself.

The fourth and final delusion, though, is that populist white supremacy is some new, malign outgrowth of the GOP. In fact, it is its backbone. Have white supremacists really “never been welcome in the GOP”? Quite the contrary! They are the core of the GOP’s last half-century of electoral success.

As the RJC leaders well know, the contemporary Republican Party was born in the 1960s. Prior to that time, Republicans were the party of Northern, wealthy elites. The Republican party was more socially liberal than the Democratic Party — which combined populist-style economic policies with Southern, socially regressive racial ones.

That iteration of the Republican Party came apart in the 1960s, culminating in President Johnson’s signing of the Civil Rights Act of 1964. The first result was segregationist George Wallace’s bids for the presidency in 1964, when he lost in the primary to Johnson, and 1968, when he carried five states on a third-party ticket and helped throw the election to Richard Nixon.

Nixon and his aides realized the revolution that had taken place, and crafted the “Southern Strategy” to use race-baiting and criminal law to attract “Negrophobe whites” in the words of one of his aides, Kevin Phillips. Nixon’s former domestic policy chief, John Erlichman, went even further, saying in a 1994 interview (published in 2016) that the War on Drugs was a pretext to scare conservative whites about African-Americans and anti-war protesters and “disrupt those communities” by “criminalizing” and “vilifying” them.

This strategy has worked for forty years, from Nixon’s focus on the “Silent Majority” to Reagan-Bush “welfare queens” and Willie Horton, to Donald Trump’s Mexican rapists and murderers.

The Republican Party often calls itself the “party of Lincoln,” but its leaders know full well that it is dependent for its electoral success on Lincoln’s adversaries: the Southern white descendants of slave-owners, still enmeshed in conservative values and conservative conceptions of race and American identity. These are the people who want to make America great again, because for them, the white-dominated past really was better than the multicultural present.

Obviously not all Republicans are racist. Most of the fiscal-conservative/ foreign-policy-hawk wing of the party is not, and many in the Christian Right are not either. But to pretend that the Republican Party doesn’t depend upon hardcore white conservatives — with all that implies — is ridiculous. In fact, the GOP would not have won a single presidential election without them.

The RJC could have done much better. Like my colleague Matt Lewis at the Daily Beast, they could have articulated a conservative reproach to the race-baiting populists who have taken control of much of the GOP, for example.

But instead, they chose to tread a careful, cowardly path, gunning for the easy targets without taking on their enablers in the White House and elsewhere.