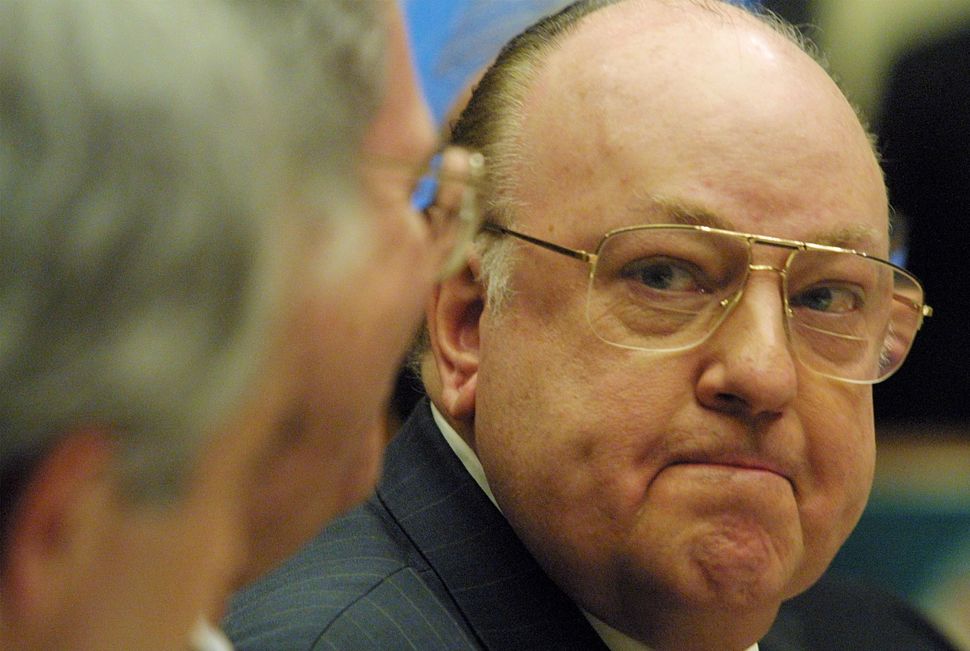 Roger Ailes, whose scandal-ridden career ended in disgrace when years of sexual harassment allegations finally caught up with him, died this week — some say of shame, others of the morbid obesity that plagued him throughout his life.

Of course, that would be both unfair and vulgar. Ailes was a media titan who altered the course of American history. Without him, there likely would have been no President Trump.

Yet unfairness, bias, vulgarity, disrespect and cheap tricks were all hallmarks of the yellow journalism Ailes practiced. His was not the first media company to act as a propaganda arm — the original “yellow journalism” was the rival newspapers of Joseph Pulitzer and William Randolph Hearst. Their sensationalistic accounts of Spanish brutality in Cuba arguably led to the Spanish-American War, just as Fox News’s sensationalistic and poorly sourced accounts of violence by immigrants, Muslims and others enabled the Trump phenomenon.

But Ailes, more than his forbears, cannily understood the potential of new media — in his case, the 24-hour news cycle of cable television. Together with his patron, Rupert Murdoch, Ailes saw that low-cost, high-bias opinion programming could be both enormously profitable and enormously influential. He recognized that an entire network could unite around a single political message, a policy implemented by Fox News’ daily “executive memos,” dictating which stories and which spin were to be featured.

And drawing on his earlier work with Richard Nixon and Ronald Reagan (as a media adviser), and with Mike Douglas and Rush Limbaugh (as producer), Ailes pioneered the use of incendiary crawls and graphics, turning the news into a video game of explosions and bright colors. “There’s a certain element of the melding with show business and entertainment,” he said in 2003.

Ailes’s primary target audience was the same as Trump’s core base: older white men disgruntled with their loss of privilege and prestige, mad as hell and not going to take it anymore. Or, at least, not going to change the channel.

Ailes filled the living rooms of these men (and their wives) with angry white men just like them: Bill O’Reilly, Glenn Beck, Sean Hannity. Alongside these men were a harem of blond, highly made-up women in short skirts — some of whom finally helped take down Ailes last year in a blizzard of sexual harassment allegations that Murdoch’s children, unlike their father, chose not to ignore.

As “The Simpsons” (which still airs on Fox) once noted, “Fox News: Not Racist, But #1 With Racists.”

To tabulate all of Fox News’s lies and distortions is an impossible task, but one that has been attempted by Fairness and Accuracy in Reporting, “The Daily Show,” Media Matters, PolitiFact and other left-leaning entities that have resisted the “war on truth” before it became official White House policy.

Like the Trump administration, Ailes’s network has combined an extreme hard-right position on Israel with an anti-cosmopolitanism that occasionally bleeds over into anti-Ssemitism. Only occasionally has the latter become explicit, as in Beck’s conspiratorial rantings. But remember, Fox News’s lies, whether profound untruths regarding Islam and immigration, or ridiculous claims about Barack and Michelle Obama’s “terrorist fist jab” or the so-called ‘War on Christmas,’ helped create the resurgent nativism that is so terrifying today. The ugly underbelly of white America that put Trump in power was petted for years by Ailes. He pandered to our worst instincts, profiting off our most shameful human qualities: fear, anger, the desire for titillation.

Just consider how Ailes’s creation is handling the current presidential crisis, unprecedented in American history, including Watergate. While most of the country has been gripped by a shocking series of disclosures — that Trump asked former FBI director James Comey to stop the investigation of former national security adviser Michael Flynn, that Trump fired Comey after he refused to do so, that Trump knew about the investigation and hired Flynn anyway, and that Trump disclosed classified information (obtained from Israel) to Russian officials — Fox News has constructed an entire alternate reality.

Two of the hosts of “Fox & Friends,” which the president watches religiously and occasionally live-tweets, made the claim that Comey might have committed a criminal act by keeping notes of his meetings with President Trump, a claim with no legal basis whatsoever. They then moved on to their next topic: “Another day, another attack on President Trump by the media. Has activism replaced journalism?”

Meanwhile Hannity called Comey “a complete failure” (of course, Hannity had praised Comey after reopening the investigation into Hillary Clinton’s emails). Another Fox News host said that Comey’s memo was the result of “flawed recollection” because of drinking alcohol.

And Fox News has continued to give a platform to White House advisor Sebastian Gorka, despite the mounting evidence — largely uncovered by the Forward — of his ties to Hungarian far right organizations.

I could go on and on – and that’s just the current scandal, which, of course, is unfolding after Ailes’s ignominious exit but which perfectly reflects the sham news organization he built.

Make no mistake: Fox News has been, and remains, the single greatest factor in Trump’s success. Every outrageous, incendiary claim that Trump has made in his political career, from birtherism to ‘immigrant crime’ to the present miasma — has been boosted and promulgated by the Fox News machine. And since Fox News has continually attacked reliable media — Ailes called CNN the “Clinton News Network” and CBS the “Communist Broadcasting System” — it sowed the post-factual, post-truth, post-reality seeds which Trump has reaped to great effect.

There’s a Jewish tradition not to speak ill of the dead — but Ailes’s own style would not respect such niceties. Ailes was, according to firsthand accounts and his own admissions, a hot-tempered, vulgar man. And Ailes remade American political life in his image. This was true before Fox News: his campaign, together with Lee Atwater, produced George H.W. Bush’s infamous “Willie Horton” campaign commercial that fanned racism in the country. But it was especially true during Fox News, when for 20 years, his network relentlessly dumbed-down and angered-up American media.

Ailes’s legacy is a divided America, an angry America, an America he helped create over decades of incitement and provocation. I would offer the traditional Jewish appellation — “yemach shemo,” may his name be blotted out — but there is no blotting out the damage he has done to the country I love. I can only offer up “zachor.” Remember.