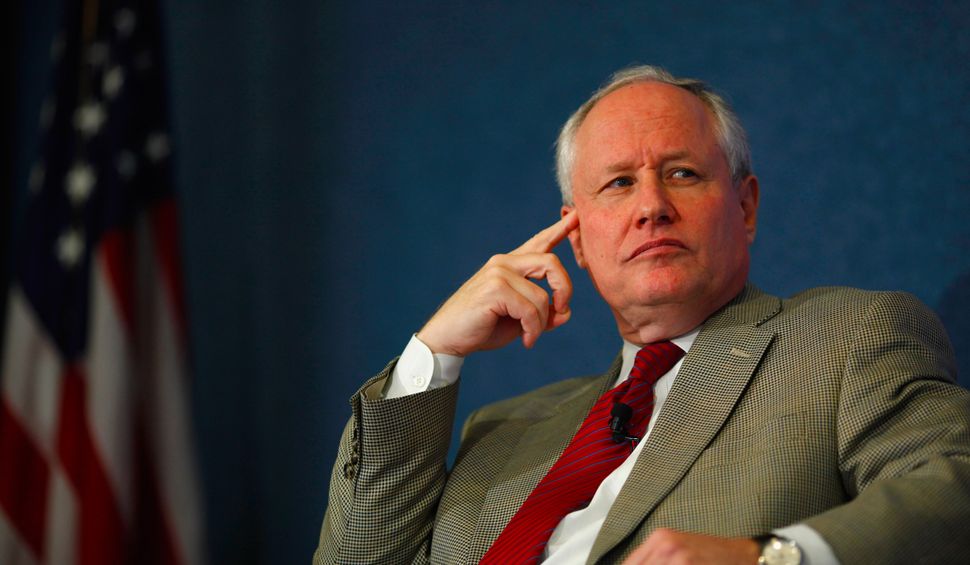 If you have been watching or reading liberal media spaces over the past two years, you’ve seen them: the anti-Trump Republicans. These are folks who were vehemently anti-Obama for the last eight years, and George W. Bush supporters before that, but just could not get on board with Trump. These ostensibly reasonable conservatives have become quite popular in left-leaning circles, and are regularly positioned as credible, moderate voices in a new political climate of extremes.

Think of Bret Stephens, who rode his anti-Trumpism from a post at the Wall Street Journal to the pages of the New York Times. Along with the likes of Bill Kristol and Jennifer Rubin, Stephens seems to be on MSNBC now more than ever before. Even former Breitbart writer Ben Shapiro has been repositioned by some liberal platforms as a moderate after he finally discovered right-wing anti-Semitism in 2016 and broke with Breitbart.

Especially of late, these voices have become fetishized by liberal and mainstream media outlets. This is no doubt because they purportedly show just how extreme Donald Trump and his movement really are in their willingness to break party ranks and criticize the President. But in featuring these purportedly moderate conservatives, these outlets are helping to whitewash the role these very voices played in fueling Trump’s rise — roles for which they should be held to account. For in the way they portrayed Obama’s relationship to Israel, these very pundits contributed to the rise of the “alt-right” and its defenders.

Pro-Israel advocacy in America has always come not just from Jewish Zionist voices or institutions but from Evangelical Zionist ones as well, a demographic that has for generations been the base of the Republican Party. But it was more recently, during the two Bush administrations, that this constituency really started to flex its muscles. The confluence of multiple American wars in Muslim countries, 9/11, the “War on Terror,” and the Second Intifada all helped sew together a clash of civilizations narrative that dominated the political discourse on the right and beyond. The discourse was clear about the axes of good and the axes of evil: predominantly white, Judeo-Christian civilization was on one side and Islam on the other.

Then came Barack Hussein Obama, the first African American President and the first physical manifestation of the minority-majority American future. Among the immediate reactions to Obama’s triumph was birtherism, the Tea Party, and a narrative that undergirded both: Obama isn’t one of us.

But these reactionary movements shared this core analysis with a more intellectual-seeming group. In right wing neo-conservative circles, the same narrative was congealing around Obama and one core issue: Israel. Take for example a book published in 2009 by National Review writer Michael Ledeen, which gave Obama just eight months before summing things up nicely; the book was called Obama’s Betrayal of Israel.

For others, where the verdict on Obama was still out, one question loomed large: Does Obama feel it in the kishkes for Israel?

Obama of course was as pro-Israel as any of his predecessors; he received the support of the majority of Jewish-American voters, who rank Israel as their 5th most important issue.

But that didn’t stop certain pro-Israel voices on the right. This is where some of your favorite Never-Trumpers played a crucial role, like Charles Krauthammer, who argued “It’s Obama vs. Israel”. Searching for the source of Obama’s hatred of Israel, Krauthammer wondered if it stemmed from Obama’s penchant for “appeasing enemies while beating up on allies” or because Obama wants to “heal the breach between Christianity and Islam… and has little patience for this pesky Jewish state.”

Over in the Weekly Standard, Bill Kristol told us that Obama was angry, “accelerating both his appeasement of Iran and his attacks on Israel.” But there was good news: “The Republican Party and the conservative movement — and most of the American people — stand with Israel and against President Obama.” Kristol also set up the “Emergency Committee for Israel”, a right-wing attack operation intended to counterbalance J Street, which was seen as giving Obama Jewish cover. The emergency? It was Hussein Obama, as robocalls supporting Netanyahu’s reelection in Israel called him.

Then you have Bret Stephens, who argued that Obama not only “betrayed” Israel, but that he had systematically failed to oppose everyone from the Iranian regime to Bashar al-Assad to Russia to the Muslim Brotherhood. And who did Bret Stephens say was “most betrayed” by Barack Hussein Obama, the first African-American president? “Americans”.

The narrative flowed back and forth between these voices and others on the right, like Robert Spencer or Dick Cheney or Sean Hannity, or Alan West, who wrote, “The barbarians are indeed at the gate, but there are also traitors within our ranks. If Barack Obama goes to the U.N. Security Council and drops the veto support for the two-state solution — I believe we will see the latter enable the former.”

Likewise, Mike Huckabee and Newt Gingrich, two of President Trump’s early supporters, helped carry the tune of dogwhisltes. Gingrich argued that Obama “is so outside our comprehension” that you can only understand him by knowing “Kenyan, anti-colonial behavior.” Mike Huckabee told Fox News viewers everything Obama “does is against what Christians stand for, and he’s against the Jews in Israel.” Furthermore, argued Huckabee, “The one group of people that can know they have his undying, unfailing support would be the Muslim community. And it doesn’t matter whether it’s the radical Muslim community or the more moderate Muslim community.”

But opposing Obama on Israel had a deeper impact than these pundits reckoned with. It’s well illustrated in an episode from 2016 involving Jennifer Rubin. Rubin wrote an article in the Washington Post called “Why it’s correct to label the Obama administration ‘anti-Israel’”. Rubin concluded that the Obama administration was “the most anti-Israel in history,” a “disloyal, unhelpful ally.”

But Rubin’s piece – typical of her output regarding Obama for the eight years of his presidency – had a ripple effect. The piece was amplified on Breitbart News, which Steve Bannon called the platform of the alt-right, precisely because it reinforced their narrative.

In other words, the white supremacist homebase saw no contradiction between Rubin’s analysis of Obama and Israel and their own Weltanschauung. And this is exactly the point – not only did these pundits not contradict the the ideological undercurrent of the alt-right; they provided a piece of the paradigm with their insistence over and over on an us-vs-them mentality.

But where you can really see the road from neocon hawkishness to white supremacy is in Trump’s tweets. In 2014, he called Obama Israel’s greatest enemy:

If only Obama would treat @IsraeliPM @netanyahu with the same respect he awards tyrants. Very strange & dangerous for our national security.

But even further back, in 2011, Trump tweeted, “@BarackObama You have abandoned Israel and engaged the Muslim Brotherhood, and even the Arab world does not like it.”

@BarackObama You have abandoned Israel and engaged the Muslim Brotherhood, and even the Arab world does not like it http://t.co/HBlFBie

In one particularly exemplary tweet, Trump wrote, “The WH should not have hosted the Muslim Brotherhood. @BarackObama’s friends are enemies of the US and @Israel. The Islamist winter is here.”

THe WH should not have hosted the Muslim Brotherhood. @BarackObama’s friends are enemies of the US and @Israel. The Islamist winter is here.

In this tweet especially, you see the way Trump deploys solidarity with Israel as part of a clash of civilizations against Islam. Echoing the neocon pundits, Trump assimilated the idea that it’s the Judeo-Christians against the Muslims. You’re either with us or against us.

As Trump played these racist and conspiratorial tunes to his alt-right base, the never-Trumpers helped carry the melody.

And then something happened: the alt-right dropped the “Judeo”. It turned out that deep in its core, the alt-right at the base of Donald Trump’s support didn’t see the “us” the same way.

Somewhere along the way, the anti-Semitic, neo-Nazi wing of the alt–right managed to assimilate and metabolize the us-vs-them mentality while spitting out the pro-Israel parts of it that didn’t suit them. And then they became the center of Trump’s base.

The thing these pundits missed is that all forms of bigotry stem from the same disease. You can’t flirt with Islamophobia and anti-black racism and expect that the hatred won’t eventually turn on someone else. Indeed, another thing many of these pundits share is degrading and dehumanizing attitudes toward Palestinians and support for policies that deny their rights. Huckabee and Gingrich have both engaged in denialism toward Palestinians, and Ben Shapiro is an unabashed advocate of ethnically cleansing Palestinians. Jennifer Rubin once retweeted a rather genocidal tweet about Palestinians.

These and other indicators should have been a dead giveaway that bigotry was the beating heart of this anti-Obama rhetoric. But it was sadly sanctioned by this clash of civilizations discourse and by the mainstream media.

The intellectual roadwork for the white supremacists marching in Charlottesville was at least in part enabled by a mentality that was introduced long before Obama but solidified during his administration. It’s time that the conservative pundits who bear some of the blame be held to account for their role in all of this – by the media who so loves them.