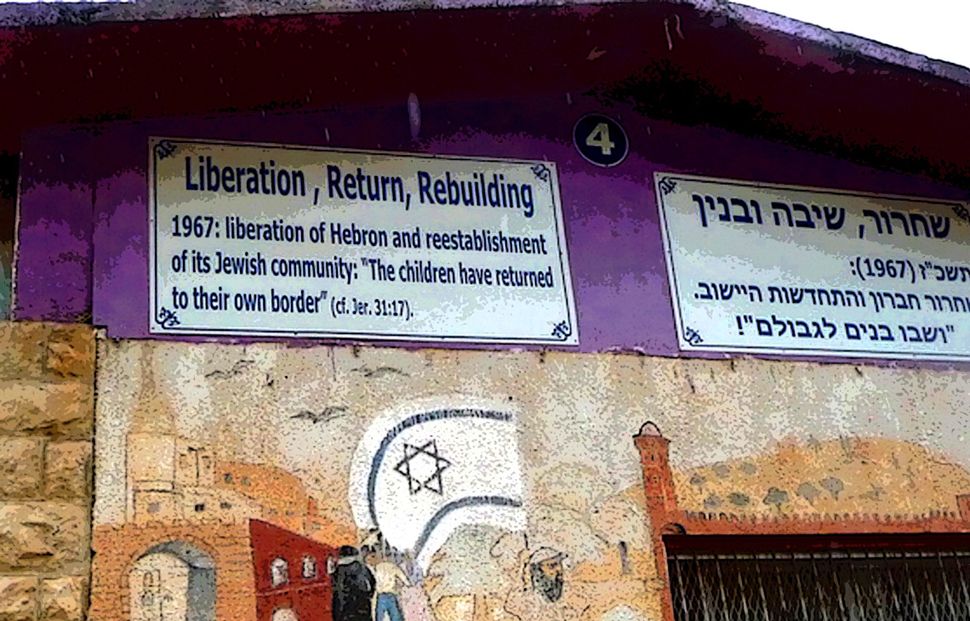 I was born in the ancient Palestinian city of Hebron in the occupied West Bank in a home around the corner from the entrance to Shuhada Street, the main thoroughfare and marketplace in the city. The name of our neighborhood was Bab el-Khan.

Today, hanging on the stone walls of my old Bab el-Khan neighborhood is a sign in Hebrew and English reading “Emek Hebron.” The houses and streets are empty. Israeli soldiers stand guard to secure ease of movement for illegal Israeli settlers to travel from our confiscated Palestinians homes to the synagogue they created after taking over half of our mosque. 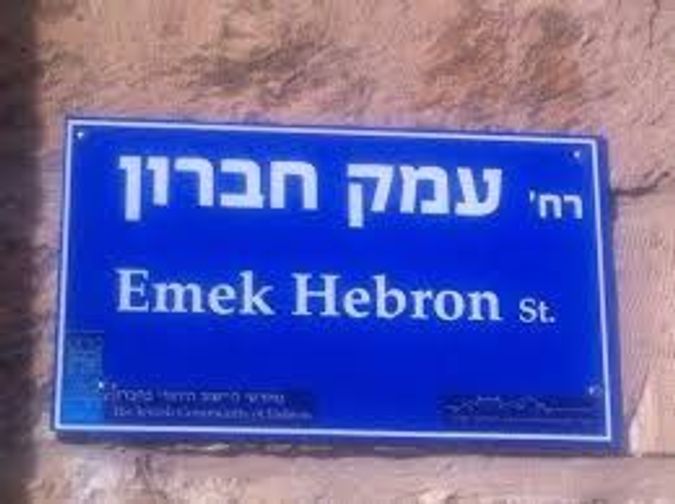 There are between 600 and 850 settlers, many of them extremists, living in downtown Hebron, with around 1,500 soldiers to protect them. For more than a decade, settlers have been installing these new Hebrew and English signs throughout Hebron as part of an effort to assert their dominance over Palestinians in the city and erase our identities. Over the past two years, the number of signs has rapidly increased. Throughout Shuhada Street are directional signs in Hebrew and English: Chabad Cemetery, Old Jewish Cemetery, Ancient Tel Hebron. In the middle of the street are a series of murals. Above the murals are signs posted by the settlers with political statements declaring that Hebron belongs to them. 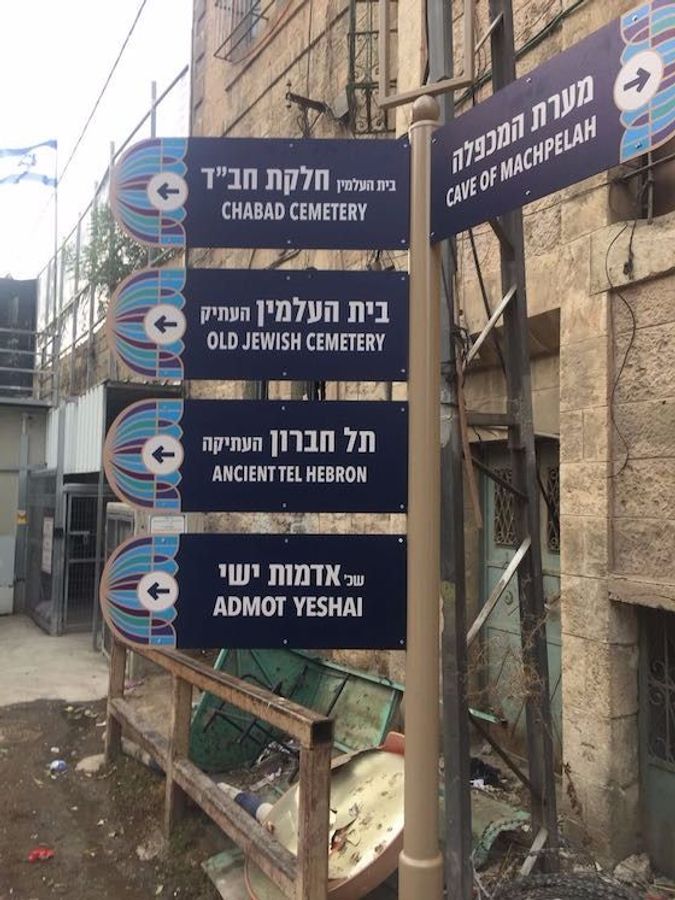 Their signs are illegal even under Israeli law, which requires, according to the Hebron Protocol signed in 1997, that the Palestinian identity of the city be protected. In addition to changing street names from Arabic to English and Hebrew, many of the signs are mounted on private Palestinian shops and homes without the owner’s consent. This is not only erasure, it is incitement.

As part of an effort to have the signs removed, Rabbis for Human Rights has partnered with my organization, Youth Against Settlements, in filing suit against them in an Israeli court. Given the illegality of the signs, we had requested the Israeli army secure the area so we could remove them. The army refused to grant our request, citing fear of violence. Now we are taking the case to Israel’s high court in Jerusalem. Our petition reads: “In a systematic, deliberate manner, the Committee of the Renewal of the Jewish Community of Hebron erases Palestinian cultural identity from Hebron’s Shuhada Street and replaces it with a narrative consistent with the position of its members. This has been accomplished through exploiting the painful reality where most of the local Palestinian population has fled their homes as a result of severe restrictions imposed on them by the Israeli security forces.”

But the conversion of my old neighborhood from Bab el-Khan to Emek Hebron is only one of many actions by Hebron’s settler population to erase the Palestinian identity from our city and pressure us to leave our homes. In 1994, Brooklyn-born Israeli settler Baruch Goldstein entered the Ibrahimi mosque and opened fire, murdering 29 Palestinians as they prayed, and injuring 125 more. Israel responded by banning Palestinian cars from driving down Shuhada Street, once the heart and soul of downtown Hebron, and dividing the Ibrahimi Mosque.

In 2000, during the Second Intifada, and following a demand from settlers, the Israeli military banned Palestinians from walking on Shuhada Street, while Jewish settlers continue to walk and drive on the street freely. There are now around 100 barriers controlling Palestinian movement in Hebron and 20 permanently staffed Israeli army checkpoints. Palestinian shops remain closed, their front doors welded shut. Palestinian families who remain on Shuhada Street can only reach their homes by climbing-up to rooftop entrances and going through back alleyways, while many others have given up and moved away. 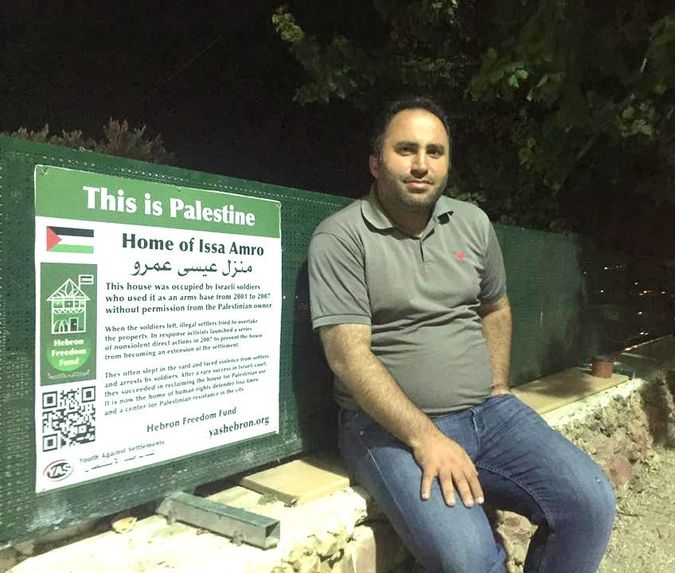 Through their coordination with the Israeli military, the settlers in Hebron control all aspects of Palestinian life. The have the army raid our homes, close streets and arrest activists such as me. In 2013, the settlers submitted a letter to the army demanding they get rid of me. I was immediately arrested. In 2016, the demands of the settlers to get rid of me were strengthened. Now I face 18 false charges in an Israeli military court. Though Amnesty International has said that all of the charges against me are baseless and 34 members of U.S. Congress and 4 Senators have signed letters in support of me, I will probably be sentenced to a significant amount of time in an Israeli prison for my efforts to defend Palestinian human rights in Hebron.

Let me be clear. I am not opposed to Jews coming to Hebron. It is the violent, hateful and illegal settler presence, protected by a hostile foreign army, that I am opposed to. It is decades of a colonial project that works day and night to erase my Palestinian identity and displace me from my land and birthplace that I am opposed to. Because of the illegal settlers, unemployment in Hebron’s old city, the area under Israeli military control, is over 70%. That is even higher than in Gaza. Having control of our religious sites and historic streets and marketplaces, combined with the removal of the Israeli military and their checkpoints and movement barriers, could create a booming tourist industry for our city, for which, without a doubt, Jews would be among our most frequent visitors. 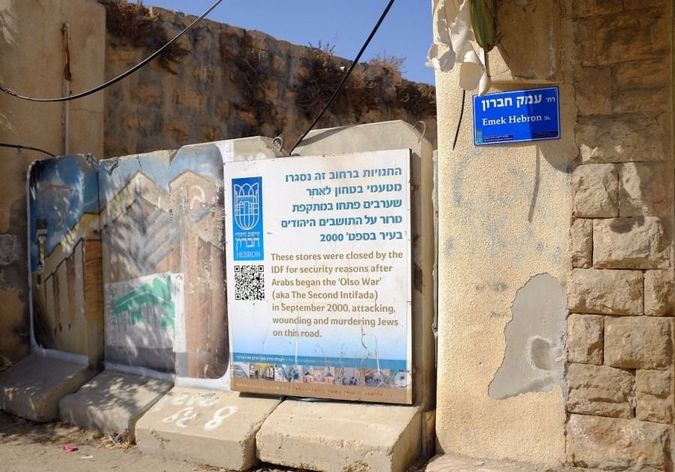 The goal of all the restrictions, closures, barriers, and Hebrew signs is to make life so difficult for Palestinians that they leave willingly. This has been Israel’s goal throughout all of occupied Palestine, but Hebron is one of the places we feel it most intensely because settlers have implanted themselves directly in our midst. On Saturday afternoons, dozens of them, protected by soldiers, parade through the Palestinian marketplace. Twice a year, settlers demand to march into the area of the city that is under Palestinian Authority control. They claim that the tomb of one of their prophets is located in the basement of a Palestinian home there. They demand a ‘sterile’ (a term used by the Israeli army) street without any Palestinians while they walk. Soldiers drive armored vehicles into the street and force Palestinian merchants to close their shops. A couple of weeks ago, they occupied a private Palestinian home, claiming they had purchased it despite the case still being in Israeli court. Soldiers immediately set up protection for them to remain in the home. They have already put a sign describing the home as Jewish property.

Though I am glad that our case to remove the settlers’ signs is going to court – as I believe in always seeking accountability – I have little faith that Israel will enforce its own legal rulings even if they were to decide in our favor. The safeguarding of our identities and lands as Palestinians will not come from the very same Israeli systems built to oppress and erase us. 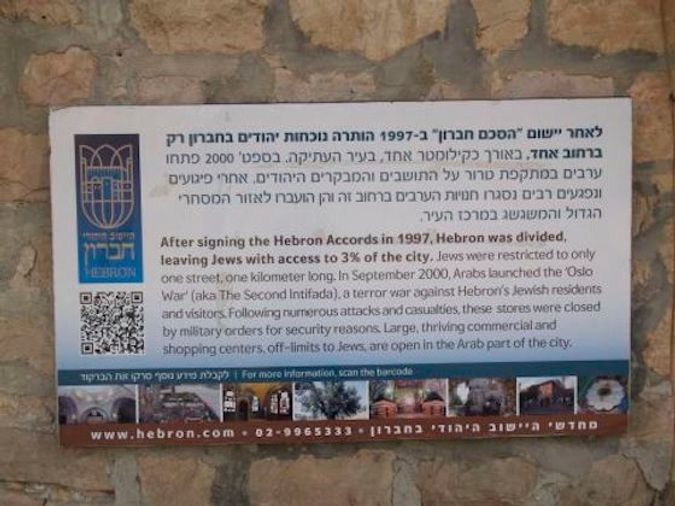 In addition to this court case, we must make all efforts ourselves to strengthen our civil society and protect our history, identity and homes. And we need even more solidarity from our progressive allies across all communities to help us place our signs of truth, justice and accountability. We know this will not come easily and will not be without sacrifice. But the possibility of returning the street of my birth from its occupied name of Emek Hebron back to its rightful name of Babs el-Kahn is worth the effort.