What A Rabbi With Cancer Wants To Say To John McCain 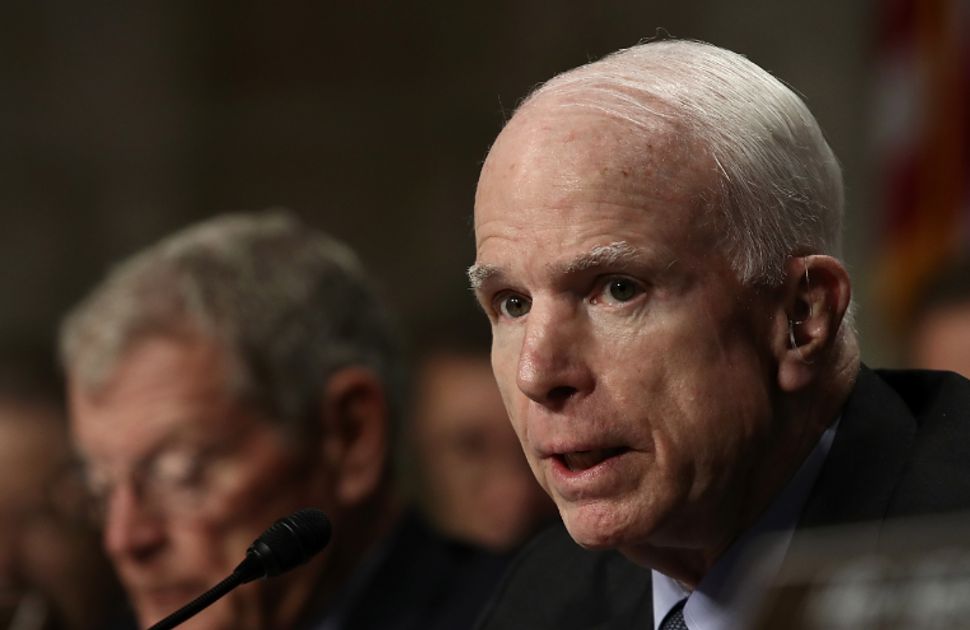 Sen. John McCain and Rabbi Rachel Cowan inhabit different universes politically, socially, economically and religiously. Cowan did not vote for McCain when he ran for president in 2008. In fact, she’s never voted for a Republican and — wild guess here — I bet he’s never participated in a meditation service led by a female rabbi who has long been a civil rights activist and spiritual teacher.

But now the senator and the rabbi share one poignant, terrible thing: glioblastoma, a rare, aggressive cancer of the brain.

When my husband and I visited Rachel on Shabbat afternoon — we are relative newcomers to her extraordinarily broad and deep circle of friends — it was the day after McCain, for the second time, announced that he would not support the last-ditch efforts by his fellow Senate Republicans to obliterate the Affordable Care Act and replace it with, well, something far, far worse.

Rachel said she wanted to write a letter to McCain. She’s endured surgery, hospitalizations, radiation and chemotherapy since her shocking diagnosis in February, so I offered to provide the platform for her message.

“God bless John McCain,” she told me in a follow-up phone conversation yesterday. She acknowledged being worried that he would side with the Republican majority and President Trump before his dramatic “thumbs down” in July, and again, before his statement on Friday. “I thought: How can you possibly vote against keeping the health care bill? You yourself have benefited from it. You’re betraying your community of disease!” she said.

But in the end, McCain said it was the lack of any public process and evaluation that shaped his vote. Rachel cheered that. “I feel that finally somebody is standing up for the democratic process. We can’t be a country that behaves this way, passing bills at night that nobody has read. He stood up for making government work,” she said.

“It’s a really terrifying experience to be alone in a hospital at night and worrying that you could lose it all. I had never experienced a political situation in such immediate terms.“

So, she wants to say directly to McCain: “Thank you for flying in late at night, not knowing what’s going to happen. Thank you for sticking with this. I identify with you as a fellow sufferer. This treatment is not easy. We are supporting you.”

To those who have known Rachel Cowan far longer than I, you know that this embrace is in keeping with her spiritual character, but not with her politics. Do not fear. When asked if there was anything else she’d want to include in this hypothetical letter to the senator, she replied: “I might not mention Sarah Palin. Truly, how could he possibly have done that?”

Rosh Hashanah on my mind

Days later, the tunes, the warm feelings, even a few leftovers from the holiday are still with me. Some highlights: Rabbi Jeremy Kalmanofsky’s stirring exhortation that we Jews really do need to behave better toward each other. The beautiful challah braided around a bowl of honey created by one of my daughters. The gathering of Jews of every type along the Hudson waterfront tossing bread to the waters, expressing their private thoughts and then engaging in very public schmoozing as a gorgeous pink-and-orange sun set to the West.

Though not a football fan, I am fascinated by the players’ protests and troubled by the president’s tweets. So I especially appreciated an illuminating piece written by my friend and Forward contributing editor, Sam Freedman, who reminds us that politics and race have always had a place on the gridiron.

And if free speech on the field weren’t charged enough, the Washington Post’s media columnist, Margaret Sullivan, reported that 27 states have considered legislation that would potentially limit the kind of public protests once ubiquitous during the civil rights movement and the Vietnam War. “It amounts to a nationwide movement to chill speech,” she warned.

As we make our way to Yom Kippur, the Forward is offering all manner of stories and columns to help your holiday become more meaningful. Check out our continually updated coverage here.

Our new feature, Have Your Say, posts a provocative question each week, and then compiles readers’ answers in a story for further debate. This week’s question: Is it anti-Semitic to schedule something on Yom Kippur? Click on the link and tell us what you think.

As always, I welcome your comments at JaneEisnerEIC@forward.com. To all who are fasting or observing Yom Kippur in your own way, may you find fulfillment and strength. G’mar chatimah tovah.

What A Rabbi With Cancer Wants To Say To John McCain