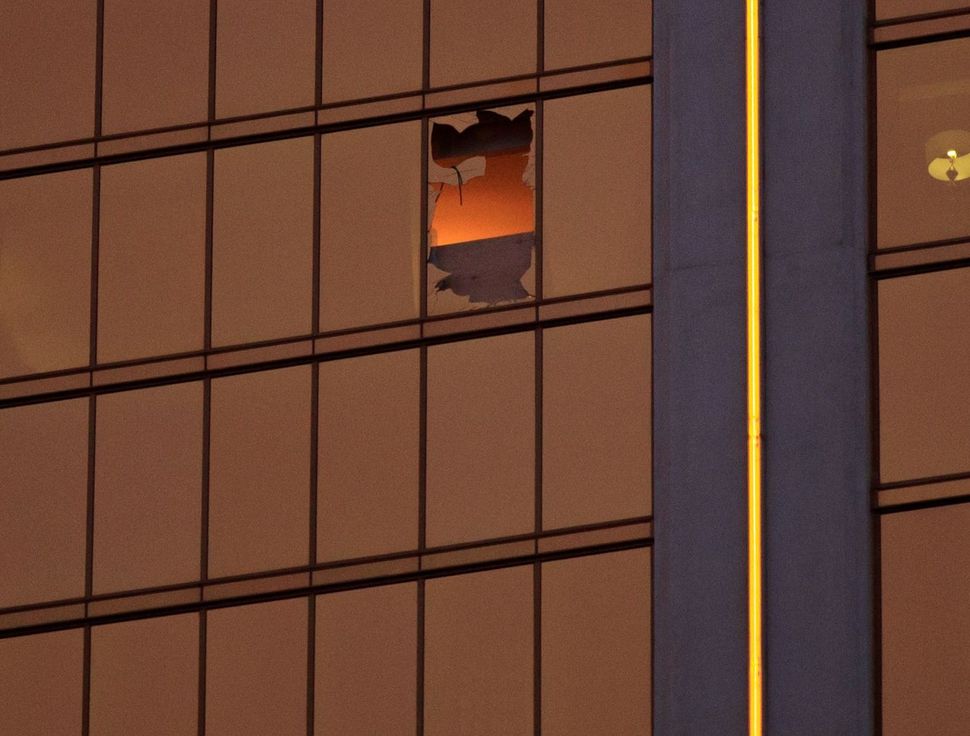 A week has now passed since Stephen Paddock murdered 58 men and women, and wounded nearly 500, at a country music concert in Las Vegas. Having searched Paddock’s home and computer, questioned his girl friend and family members, state and federal officials remain flummoxed over the killer’s motivation. Predictably, President Trump has answers where others have only questions. In words echoed by the Republican establishment, he declared that Paddock had committed an act of “pure evil.”

Deliver us from those who use evil as their epistemological default position. By claiming Paddock channeled what we can call “radical evil,” Trump and his followers are absolving themselves of confronting the causes and consequences of Paddock’s act. More importantly, by casting the act as the work of radical evil, they are emptying the word of meaning. Paradoxically, by rendering evil otherworldly, they are rendering it banal.

Of course, when we hear “evil” and “banal” uttered in the same sentence, we hear the name Hannah Arendt. Though more than a half-century has passed since the publication of her book “Eichmann in Jerusalem: A Report on the Banality of Evil”, the fierce controversy it lighted continues to burn. Along with the responsibility she assigned the Jewish councils in unfolding of the Final Solution, Arendt’s most incendiary claim concerned Eichmann’s own responsibility. For those expecting—perhaps, even, needing—Eichmann to be a dramatic incarnation of evil, Arendt’s claim shocked. Far from equaling, say, Shakespeare’s Iago or Richard III, Eichmann was a mediocrity. He was someone, Arendt concluded, “who, to put the matter colloquially, never realized what he was doing.”

Not surprisingly, this claim shocked many readers; no less unsurprisingly, Arendt refused to budge on the issue. While she failed to take the full measure of Eichmann’s anti-Semitic convictions—necessarily so, since much of the relevant documentation was unavailable when she first wrote the book—Arendt insisted that her fundamental point held fast. Eichmann’s acts, she argued, were not the fruit of reflection. Instead, they were the consequence of what she called “thoughtlessness.”

Tellingly, Arendt’s close friend Mary McCarthy warned that American readers would misunderstand her use of the word. To be thoughtless, we believe, is to be inconsiderate or uncaring. But Arendt meant something far deeper and destructive—namely, the individual’s inability or refusal to think. Listening to Eichmann speak at his trial, Arendt was scandalized not by his thoughts, but by the sheer absence of thought. “The longer one listened to him, the more obvious it became that his inability to speak was closely connected with an inability to think, namely to think from the standpoint of somebody else.”

What does this have to do with Stephen Paddock? Little, if anything at all—at least, that is, until we learn something more about the man. But even if we do discover a stash of letters or emails in which Paddock bares what few would recognize as a soul, we must not lose sight of Arendt’s notion of “thoughtlessness.” The concept helps explain the reaction of those who, in the wake of Paddock’s murderous spree, bandy the word “evil” over the airwaves and across social media. Recall that Arendt, by insisting upon Eichmann’s thoughtlessness, turns our attention to a system that allowed him, and countless others, to do what they did. Rethinking her phrase “the banality of evil,” Arendt offered a revised definition in her 1971 essay “Thinking and Moral Considerations”: it is the “phenomenon of evil deeds, committed on a gigantic scale, which could not be traced to any particularity of wickedness, pathology, or ideological conviction in the doer.”

Let’s be clear: we do not live in a totalitarian society where mass murder is a constituent element of the regime’s worldview. No less clear is that ideological convictions have been claimed by, or pathological motives assigned to many of those Americans who have committed acts of mass murder. But it is also clear that, were she alive today, Arendt would point to mass thoughtlessness as a pivotal factor to our national pastime of mass shootings. Earlier this week, the New York Times counted 521 mass shootings over the past 477 days. That number has since grown, as does the thoughtlessness it inspires. Under the weight of polished voicing of outrage and the practiced blaming of evil, thought dies as well, though it never figures in the body counts.

For Arendt, the Shoah could only be explained by tracing the ways in which individual men and women had to decide if they would stand athwart of something wicked coming their way. Called upon to think and exercise their moral imagination, most simply failed to do so. Those who now insist that the evil in the heart of Stephen Paddock trumps common sense gun control not only refuse to think, but also deny that task to others. They argue that those who insist on thinking about the presence of firearms in this country, and the persistence of mass murders, are simply “politicizing” this particular tragedy. As Arendt concluded in her book The Life of the Mind, “The sad truth is that most evil is done by people who never make up their minds to be good or evil.”