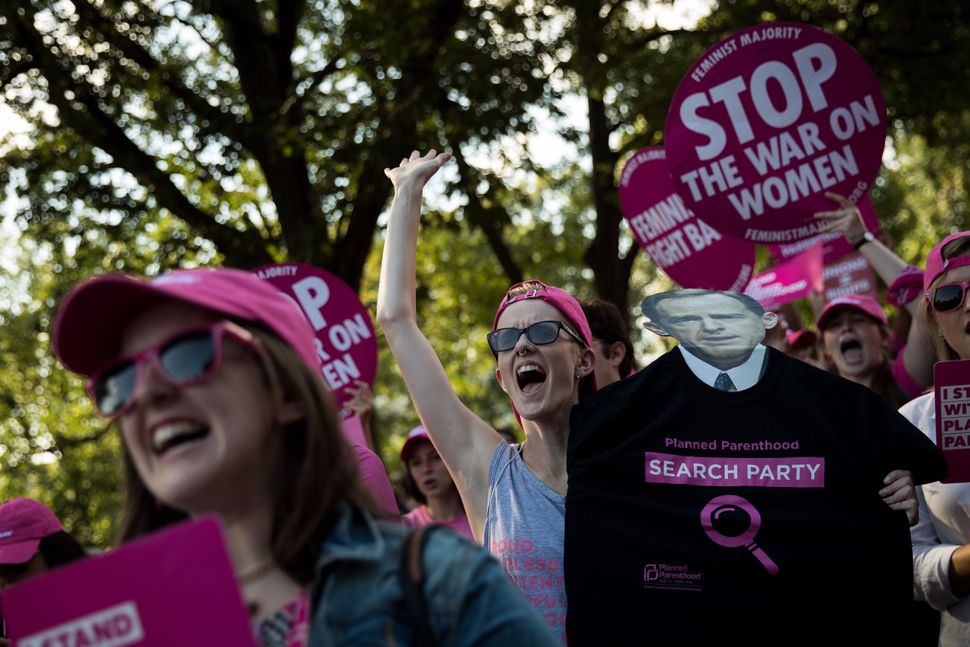 As you might imagine, President Trump’s decision allowing many more employers to use a religious exemption to deny their employees insurance coverage for contraception ignited a passionate debate on our pages. But interestingly, it was the disagreement between two Orthodox women that I found so fascinating.

First, Bethany Mandel, a regular columnist, embraced the administration’s argument that this is matter of religious freedom and, therefore, something Jews should respect and support.

On the surface, her point seems reasonable: “The Trump administration’s plan isn’t about exerting control over women’s bodies. It’s about preventing the government from imposing regulations which infringe on the freedoms of religious Americans. The Trump mandate is merely a rewind to the days before Obamacare, when employers couldn’t be forced to pay for health care that violates their religious principles.”

But what if one’s religious principles require access to birth control? That’s the compelling argument made in this essay by my colleague Laura Adkins.

She cited numerous circumstances where Jewish law and practice obliges women to use contraception to fulfill their religious duties or to safeguard their health. Quoting one Orthodox rabbi: “The new policy discriminates against Jewish women’s religious freedoms since there are times that Jewish law would not only permit but encourage safe birth control methods and responsible family planning.”

I’d like to add another religious perspective — not an Orthodox one, since that’s not who I am, but one suffused with what I believe are values driven by faith. All religions, especially Judaism, balance individual rights with communal responsibility; we are enjoined to care for others, protect the vulnerable and serve the common good.

The availability of contraception serves the common good. Birth control doesn’t only “liberate” women — men should consider themselves “liberated,” too, from unplanned pregnancies — and address many health concerns. The research proves what common sense dictates: More and better use of contraception has reduced the rate of unplanned pregnancies and contributed to the decline in abortions. Access to birth control has, in particular, led to the steady decline in teen pregnancies in America, once a serious scourge in many communities, consigning young mothers and their children to lives challenged by economic and social struggle.

The Obamacare mandate didn’t force believing Catholics to march to the pharmacy and purchase birth control for their employees if that violated their religious teachings. It required those employers to provide a health insurance plan covering many procedures and medications that their employees could elect to use.

Wealthy women can still afford contraception, of course, and, believe me, will still obtain it. This rule hurts those least able to afford it. But targeting the poor and vulnerable is the consistent consequence of Donald Trump’s agenda.

How that can be viewed as protecting religious liberty is beyond me.

Me too. My Facebook feed is overwhelmed by women responding to a simple request: “If all the women who have been sexually harassed or assaulted wrote ‘Me too’ as a status, we might give people a sense of the magnitude of the problem.”

More on that soon.

What should Jewish institutions do to combat sexual harassment? Send us your thoughts and we’ll share them with our readers.

What else I’ve been writing. President Trump’s decision not to certify the multilateral agreement to curtail Iran’s nuclear weapons, and instead order Congress to somehow “fix” this “very bad” deal, prompted a brief trip down memory lane — back to 2015, when Prime Minister Benjamin Netanyahu went to Congress to blast the agreement and drive a wedge through American politics that  Trump has now exploited. Read my column here.

What else I’ve been reading. For those who despair that the National Rifle Association will never be stopped, Ronald Brownstein offers a useful history lesson and a way forward. Over time, he writes on CNN.com, “time may be on the side of those advocating for tighter limits on access to guns.”

Far less hopeful is Emily Taken’s story in Foreign Policy detailing how George Soros became the bogeyman of Europe. It’s a chilling tale of how a wealthy Jewish businessman, 87 years old, has become a useful scapegoat for anti-Semitic, authoritarian regimes.

Looking forward. On Thursday evening I’ll be moderating a discussion on the future of Jewish education, held at New York University, with Barry Chazan, Robert Chazan and Benjamin Jacobs, who’ve written a new book on the challenging subject. Interested in attending? There still might be room. Check here.

Send your thoughts and reactions to [email protected]. And if you want the newsletter in your inbox, subscribe here to receive Jane Looking Forward every Monday afternoon.