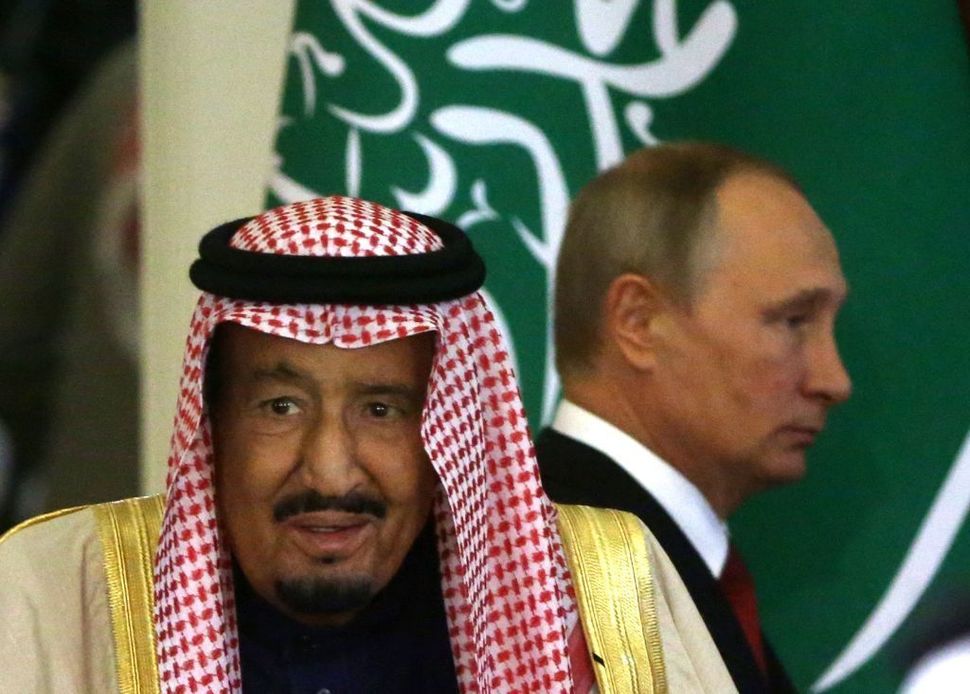 Russia. When Americans hear the word these days, we’re usually thinking about the stealth computer attack on our election system. But as Russian attacks on America go, undermining our democracy and helping install a circus clown as our commander in chief is further down the list than you might think.

Of greater immediate consequence is Russia’s campaign to take over America’s dominant role in the Middle East. It’s a multipronged military and diplomatic effort, and Russia is emerging triumphant. Making a hash of Pax Americana. Eating our lunch.

Scarcely noticeable until just a few weeks ago, it’s suddenly become glaringly apparent that Russia has her fingers on virtually every main Middle East pressure point. Most obvious is Syria, where Russia has all but won a civil war that everyone else considered unwinnable. In the process they’ve established themselves as chief ally, protector and suzerain of the Assad regime and its Iranian enabler and Shi’ite allies.

Moscow’s gains don’t end there. The war has made Russia the key intermediary between Iran and its main adversaries, Saudi Arabia and Israel, both of which have been showing a keen interest lately in burnishing their ties with the Kremlin. Israel’s Prime Minister Benjamin Netanyahu has met with Russian President Vladimir Putin six times in the past two years, more times than he’s met with the two American presidents in that period. Saudi King Salman made a historic, symbolically charged visit to Moscow on October 4, the first ever by a Saudi monarch.

“They are playing a very, very intricate and very fruitful policy, and the United States seems to be nowhere to be seen,” Efraim Halevy, former director of Israel’s Mossad intelligence agency, tells me.

In Syria, Russia is settled in for the long haul. Earlier this year, Moscow signed a new 49-year lease on a minor Russian naval station at Tartus on the Mediterranean. They’re now turning it into a full-scale warm-water naval base, a longstanding Russian dream.

In the field, what began two years ago, when Russia entered the then-four-year-old Syrian war with a team of advisers and limited air cover, is now a full-scale presence of air, naval and special-ops forces, commanded until recently by one of Russia’s top commanders, Lt. Gen. Valery Asapov. He was killed September 23 by ISIS mortar fire — not in the main combat zone in western Syria, between Damascus and the sea, but 300 miles east near the Iraqi border.

“This means the Russians are not just concentrating on the Mediterranean coast and the main cities,” said Halevy. “They’re active in the east and sending their best people there.”

The Syrian-Iraqi border region, where Asapov was killed, is a hotspot of explosive global importance right now. Iran is trying to secure control of what’s called the Shi’ite Crescent, a continuous overland arc of Iranian influence westward to the Mediterranean. It runs from Iran through Iraq, which is now Shi’ite-ruled — thanks to the George W. Bush administration — and continues through Syria to the Mediterranean and then down to Lebanon, where Hezbollah, the Iranian proxy militia, joined the governing coalition just days ago. At present the Iraq-Syria border region is the weak link in Iran’s crescent. Whether Iran clears the remaining obstacles and completes the arc is now largely up to Russia.

Washington’s best source of leverage along the crescent is with the Kurds, who control the lands just north of the would-be Shi’ite land bridge on both sides of the Syria-Iraq border. Syrian Kurds led the U.S.-backed forces that took Raqqa, the capital of the so-called Islamic State, just north of the Crescent route, on October 16.

Unfortunately, it was on that same day, October 16, that Iraqi Kurds were driven out of the oil-rich city of Kirkuk, 400 miles east of Raqqa, by U.S.-armed Iraqi government troops and their allied, Iran-controlled Shi’ite militias. While the Trump administration floundered for a coherent position on Kirkuk, the humiliating outcome left Kurds fuming at America’s betrayal and has some U.S. diplomats speaking of an American policy “cataclysm.” It’s not clear how committed an ally the Kurds will be when the Shi’ite Crescent project escalates into the next crisis.

By richly symbolic coincidence, October 16 was also the day that Russia’s defense minister, Sergei Shoigu, began a three-day visit to Israel, the first ever by a Russian defense minister. The main item on the agenda was Iran. The winding down of the Syrian war is creating a potential strategic nightmare for Israel by leaving thousands of Iranian, Hezbollah and allied Shi’ite fighters sitting right next door. Russia is the address for Israel’s complaints.

Netanyahu took the opportunity of Shoigu’s visit to declare publicly that Israel won’t tolerate a continued Iranian military presence in Syria after the war. In closed-door meetings with Shoigu, however, Israel reportedly asked for a 25-mile-wide buffer zone separating Iranian troops from the Golan Heights frontier. Shoigu reportedly offered 6 to 9 miles.

Amid all the comings and goings of Moscow’s Middle East October, the Saudi king’s four-day mission to Moscow, beginning October 4, had fewer practical ramifications than Shoigu’s Tel Aviv visit, but its symbolic importance cannot be overstated. Any foreign state visit by a Saudi monarch is a momentous event, given the king’s 1,500-person traveling retinue and attendant ceremonial pomp. The Moscow visit exceeded that. It was historic.

The Soviet Union was the first nation to recognize the new Saudi kingdom when it was founded in 1932, but ties were broken in 1937, during the Stalin purges. Since then, Saudi Arabia has been one of America’s most loyal allies. Ties with Russia weren’t renewed until after the Soviet Union fell in 1991. “The relationship since then has been on a stable level, but nothing to write home about,” former Saudi intelligence chief Prince Turki al-Faisal, a nephew of the king, told me.

Relations hit a new low when the Russians and Saudis took opposite sides in the Syrian civil war. At the same time, though, Saudi-U.S. ties were cooling alarmingly during the Obama years, giving Russia a possible opening. The inauguration of Donald Trump last January was expected to plug that hole and improve the U.S.-Saudi link. The royal welcome given to Trump when he visited the kingdom in May, his first foreign trip as president, was supposed to mark a new beginning.

Against that background, King Salman’s Moscow trip in October seemed a startling turnabout. To be sure, there was considerable bilateral business to conduct, from mapping out new Syrian red lines to the Saudis’ Iran concerns and Russia’s sudden involvement in the Palestinians’ Hamas-Fatah schism — Moscow had hosted a rare, weeklong visit by top Hamas leadership in September and was trying to play matchmaker. And there was the price of oil, an existential interest for the world’s two biggest oil producers.

“It coincided with the Russians injecting themselves very strongly into our area,” Prince Turki said. “King Salman wanted to make sure they know where we stand and that we learn where they stand.”

Still, it’s hard not to see the king’s historic nod to Moscow, coming just four months after the president’s Saudi visit, at least partially as the kingdom’s reaction to meeting Trump in person.

In the end, King Salman’s new bromance with Putin and America’s diplomatic fiasco at Kirkuk represent two distinct patterns of American loss to Russia in the region. Kirkuk was an unforced American error resulting from rudderless, inattentive leadership in Washington. The Salman-Putin thaw reflects deft Kremlin maneuvering, identifying potential opportunities in the post-Syrian war era and rushing to fill a vacuum.

The two patterns have played out repeatedly across the region in recent months. Between them, American scholars will have plenty of material to work with when they start asking, as they inevitably will, who lost the Middle East.

J.J. Goldberg is the editor-at-large of the Forward.