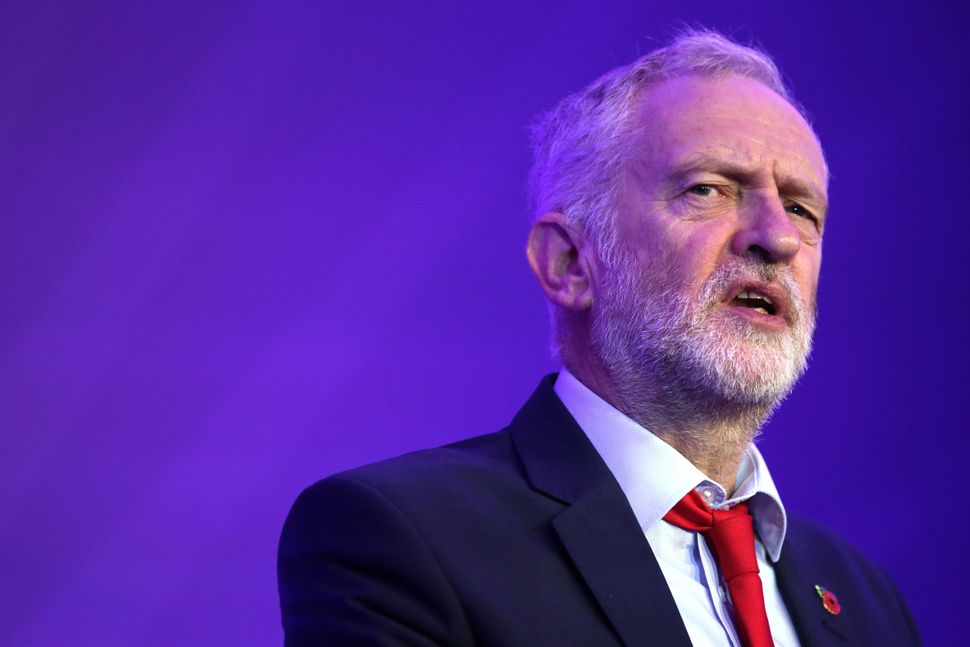 This week, Nigel Farage, the right wing politician who instigated Brexit, said in an interview that the “Jewish lobby” should worry Americans more than the Russians.

But we British Jews are used to getting it from all sides, and left-wing anti-Semitism has recently been much more prominent than the right-wing variety.

Two years ago, Jeremy Corbyn, a veteran Member of Parliament from the hard left of Britain’s Labour Party, became its unlikely leader in one of the seismic rejections of centrist, establishment politics that has shaken Western democracies in recent years. Corbyn is a veteran of anti-American and anti-Israel politics. He was Chair of the Stop The War Coalition (which opposes every war America, Britain or Israel fights, but no others); is a patron of the Palestine Solidarity Campaign; and for years wrote a column for the Communist-aligned Morning Star newspaper. If you think of Tony Blair when you think of Britain’s Labour Party, think again. That party is over.

Allegations of anti-Semitism in the Labour Party have snowballed on Corbyn’s watch, and Jewish voters have largely deserted the party. The Facebook groups and Twitter feeds of Corbynite Labour supporters contain familiar tropes about Zionist (or sometimes just Jewish) political manipulation and financial power. Denigration of the Holocaust and comparisons of Israel to Nazi Germany sit alongside conspiracy memes about the Rothschilds and claims that terrorist attacks in Europe are actually carried out by Mossad.

This kind of politics ought to sound familiar to American readers. The decision of the Chicago Dyke March in June to expel Jewish marchers who were carrying a rainbow flag bearing a Star of David comes from exactly this mindset. Similarly, when Brown University student Benjamin Gladstone wrote last year in the New York Times of being repeatedly cut out of anti-racist or refugee support work because he worked with mainstream Jewish organisations, this will have struck a chord with British students from the Oxford University Labour Club who were dismissed as “Zios” by their fellow Labour-supporting students.

What those who claim to be only anti-Zionist but not anti-Semitic don’t realize — or wont acknowledge — is that obsessive anti-Zionism inevitably generates anti-Semitic outcomes.

There is a political culture on the radical left that sees Zionism as inherently racist and is hostile towards anyone who might support it. Jews — unless they are willing to pass a political test by publicly opposing Israel — are often treated as political enemies on the wrong side of every social and political dividing line.

The bedrock of this political culture is the identity politics that has progressively replaced class as the dominant paradigm of radical left wing politics since the 1960s. In this political culture, Israel, Zionism and Jews (excluding those Jews who loudly declare their anti-Zionism) are seen as part of a global network of power, on the side of the oppressors against the oppressed.

In this world view, Israel is solely a product of Western colonialism, Zionism is solely an ideology of racial and ethnic supremacy and Jews are too white and too wealthy to ever suffer racism. To support Israel is to support apartheid and to be on the wrong side of the fixed colour lines that increasingly demarcate radical politics.

Anti-Semitism is understood by many on the left as a far right phenomenon that mostly belongs in history. Much of the left treated it as an anachronism before the rise of Trump: easily recognized when it comes from neo-Nazis in Charlottesville but not, by definition, something that could ever exist amongst the anti-fascists who oppose them.

Complain about anti-Semitism on the left and, instead of being taken seriously, you are likely to be dismissed as an agent of Israeli hasbara, cynically and dishonestly “weaponising” anti-Semitism for political motives. Or making “mood music” to undermine Labour leader Jeremy Corbyn, according to Britain’s most powerful trade union boss and Corbyn ally Len McCluskey.

This left wing anti-Zionist worldview struggles to assimilate the facts and meaning of the Holocaust into its rejection of Israel. It’s a struggle that sometimes has to get quite creative, in fact. One way people try to reconcile left wing anti-Zionism with the horrors of the Holocaust is to pin part of the blame for the genocide onto the desperate and futile attempts by some Zionists to negotiate with the Nazi regime. Another is declaring the Palestinians to be both the indirect victims of the Nazi Holocaust and the subjects of their own genocide at the hands of the new Nazis in Israel. That this approach distorts history and recklessly tramples on Jewish sensitivities doesn’t seem to bother enough people in that part of the left.

In Britain, the success of the Corbynite project to take over the Labour Party has brought this political culture from the radical fringes to centre stage. It is no coincidence that anti-Semitism has become a national political issue and a front-page story in Britain for the first time in decades.

The Labour Party has tried to address the recurring problem of anti-Semitism amongst its members, but so far has failed to do so effectively; and the nature of its failure holds the clue to understanding why it has such a problem at all. Its approach has been to hold enquiries and to introduce stronger disciplinary sanctions. Then there are the party leaders and their periodic statements about their opposition to anti-Semitism.

This is all worthy, but procedural measures and generic declarations do not – cannot – address the political culture that is the source of the left’s anti-Semitism.

Corbyn and his colleagues in the party leadership have not identified this political culture as a problem because this culture is precisely where so many of them have spent their political careers. So Corbyn condemns anti-Semitism and says it has no place in his party, but he never seems to ask why it is there in the first place.

Last month, the Institute for Jewish Policy Research and the Community Security Trust published the largest ever survey of British attitudes towards Jews and Israel (full disclosure: I work for CST and was involved in designing this study). The survey found that the more anti-Israel attitudes a person holds, the more likely they are to also hold anti-Semitic attitudes.

Few people were surprised by the findings. The hard left’s hostility to Israel and Zionism has provided fertile soil for anti-Jewish antagonism to grow. Only a change to its political culture will reduce their presence in radical left wing politics.

There’s not much that British Jews can teach their American cousins. The United States is, after all, the Goldene Medina, while Anglo-Jewry has long had a reputation for timidity. But those American Jews who are worried about growing left wing hostility to Israel and Zionism, and the anti-Semitism that often comes with it, would benefit from looking east across the Atlantic for a sense of what’s to come.

Dave Rich is author of “The Left’s Jewish Problem: Jeremy Corbyn, Israel and Anti-Semitism” (Biteback, 2016) and Deputy Director of Communications for the Community Security Trust.