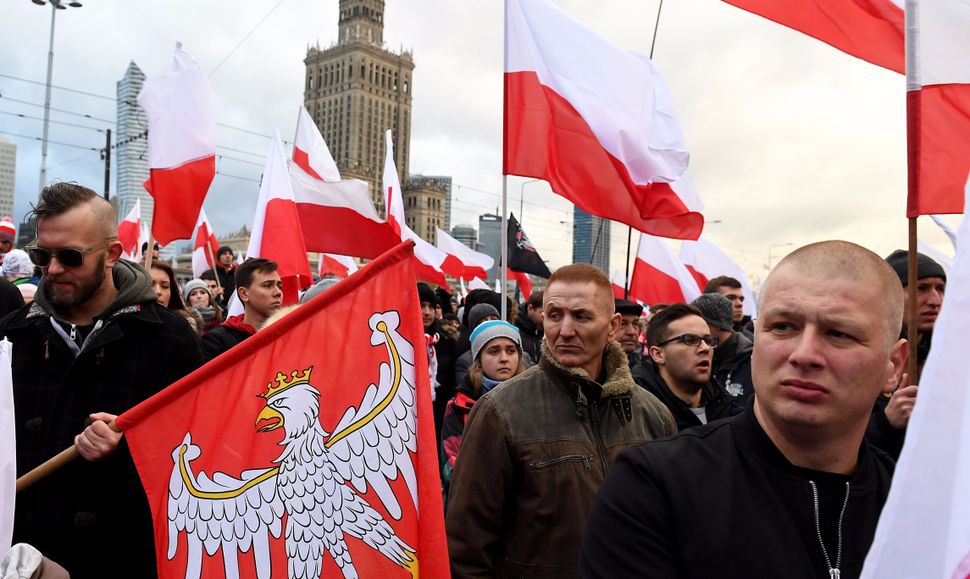 I came to Warsaw because I didn’t believe what I’d been told about anti-Semitism.

Growing up as a Jew in New York, I often felt bombarded by elders, rabbis, and teachers who insisted that anti-Semitism remained a present force in today’s world. I was skeptical. Pogrom and Holocaust narratives spoke to an utterly different Jewish experience than my own; even worse, these lessons often ended in a pitch for the State of Israel, which seemed callous. It turned anti-Semitism education into a political tool, an association that I still find hard to shake.

And so I arrived in Poland almost two months ago, ostensibly seeking the Jews that remain in what was once the epicenter of Ashkenazi Jewry. But deep down, I knew I was also seeking to prove that my safe and open Jewish experience in New York could exist anywhere, that we need not be clustered and afraid. I came to prove that true anti-Semitism is over.

On Saturday, an estimated 60,000 right-wing protesters marched in Warsaw to commemorate the 99th anniversary of Poland’s Independence from Prussian, Austrian, and Russian Partition. The march included open-air fires, anti-refugee banners, and instances of violence.

Organized by two radical nationalist youth movements who take their name from anti-Semitic groups of the 1920’s and 30’s, this year’s march was the largest in its eight-year history. The last three years have seen the march grow in size and intensity, corresponding with the 2015 election of the anti-immigrant Law and Justice (PiS) party to national power.

State media Studio Polska reported that the protest, which featured banners reading “White Europe” and “Clean Blood,” as the “Great March of the Patriots.” They aired interviews with participants who were chanting to “remov[e] Jews from power.”

On my own street, once part of the Warsaw Jewish ghetto and two miles from the protest’s center, small-scale explosions and police sirens accompanied boot-clad marchers. Immortalized in Marek Edelman’s first-hand account of the ghetto uprising, “The Ghetto Fights,” my street once again became a site of anti-Semitism, hate, and this time, my own fear.

For the first time in my privileged life, I feared that my Judaism made me a target. I’ve spoken openly with neighbors about my identity, my home in a Jewish enclave, my desires to “come back” to Poland.

After shuttering my windows, unplugging every light producing appliance, and retreating to the windowless bathroom, I could not help but wonder whether those neighbors were the friends and allies I thought they were. 60,000 people, I thought. I must have known one of them.

Last year a Pole of partial African descent was murdered in a hate crime; in August players from an Israeli soccer team were attacked by Polish fans after a match. Was I next? Had I been too open?

For ten minutes, baritone chants and unison boots forced me to hide, to cower, as so many Jews must have seventy years ago. I can’t report on the sight because I was too afraid to look out the window.

Roughly 2,000 self-identified Jews currently live in Poland. Initial comments from one government official on Saturday sought to downplay the existence of islamophobic and anti-Semitic elements in the march. By Sunday, other government officials had condemned the march’s organizers.

But this kind of ambivalent response is not surprising. Warsaw’s Jewish theatre is under reconstruction; the Warsaw Jewish Film Festival takes place this month; and in my own day-to-day life as an ‘out’ Jew I have experienced nothing but warmth and encouragement from the Poles I have met. Poland’s acknowledgement of its multi-ethnic history has improved in recent years with the opening of POLIN, the Museum of the History of Polish Jews, which as the Forward has reported aims to educate the Polish populace.

And yet, the commemoration of former Jewish neighborhoods and landmarks are woefully sparse in Warsaw. As you walk around streets like my own, the life that once existed here and its awful end are invisible. Plac Bankowy, a major thoroughfare, once held the city’s Grand Synagogue; it took a walking tour with POLIN historian Albert Stankowski for this author to realize he had daily passed the one small commemorative sign of the temple’s existence in today’s massive square.

Off a side street, we peered into construction sites where crews frequently uncover remains of Jews who hid in the basement of buildings collapsed by the Nazis during the ghetto liquidation. Oversight of these burial grounds, and care for the hundreds of thousands of Jewish graves throughout the country, often goes unfulfilled.

It is the gray, neither fully supportive nor oppositional stance of Poland’s majority to the country’s Jewish past and present that makes Saturday’s protest all the more poignant.

The white-supremacist rally in Charlottesville, Virginia, with its chants of “Jews will not replace us” and jarring images of torch-bearing neo-Nazis, rightfully shocked many in our community. I, too, was shocked that this undercurrent still existed in America. But it took my leaving America, coming to the former homeland of my family, and hearing those boots march, for the severity of our contemporary political climate, and the entrenched root of anti-Semitism, to fully sink in.

I experienced fear from anti-Semitism for the first time in my life on Saturday. The shelter was cracked, and a defiance seeps out.

A previous version of this story cited a now-retracted Wall Street Journal article which described a banner depicting a Trojan horse. This error has been corrected.