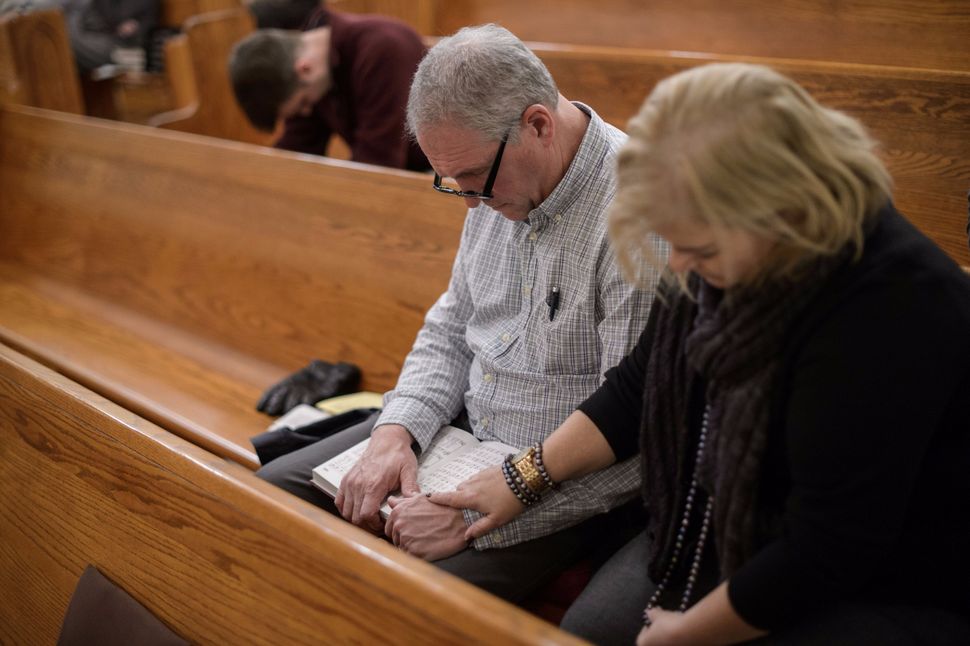 There is a talmudic story in Tractate Avodah Zarah in which the Roman authorities arrest Rabbi Eliezer on suspicion of heresy. He is acquitted through a lucky misunderstanding: when the rabbi declares his trust in the “Judge” — meaning God — the judge understands this as a vote of confidence in his own authority.

Nevertheless, Rabbi Eliezer returns home distraught, certain that he has committed some sin that led — supernaturally — to the arrest.

Trying to help his friend, Rabbi Akiva suggests, “Perhaps some statement of heresy came before you, and you found pleasure in it?”

Thus prompted, Rabbi Eliezer remembers an incident in which a student of Jesus offered an interpretation of a biblical verse, and Rabbi Eliezer not only failed to object, but even found pleasure in this teaching.

This story came to mind when I heard about two instances of Jewish organizations pursuing Christian scriptural interpretations of the Bible. Only this time, it was in service not of pleasure, but of an alliance with pro-Trump Evangelicals.

Last month, the Orthodox Union voiced its support for religious exemptions for employers who refuse to provide birth control as part of their health care plan. This decision is not only politically conservative; it also contradicts the explicit allowance in halakha for women to use birth control. In cases of medical necessity, Jewish law may even require birth control, as in the case of a woman whose life would be in danger if she became pregnant, or who takes oral contraceptives for a medical condition.

Thus, in a tragic irony, the OU’s position may result in a Jewish woman being unable to fulfil the Jewish legal obligation to protect her own life.

Questioned about this inconsistency, the OU responded that they “oppose government policies, even in the service of commendable ends, which would force religious Americans to violate the tenets of their faith.”

If the OU is making a “slippery slope” argument, one could easily imagine a different slippery slope, in which Jehovah’s Witnesses refuse to pay for health care that includes blood transfusions, and Christian Scientists refuse to pay for any health care at all. Jews working for any of these employers would likely have to “violate the tenets of their faith” by foregoing medical treatment.

But the OU is not alone. More recently, a new group calling itself the Coalition for Jewish Values emerged with a platform that mirrors that of the Evangelical right. A recent statement from the group asserts that, “Judaism values every life, including that of the unborn child.”

In fact, this position is a Christian one. Jewish law, in contrast, views life as beginning at birth, and therefore privileges saving the life of the mother over saving the fetus. A fetus bears the status of something more than an appendage or organ of the mother, but certainly less than a full human being.

The spread of restrictions on abortion pursued by the Coalition for Jewish Values could easily force a Jewish woman with a life-threatening pregnancy to resort to unregulated and unsafe treatment in order to follow the demands of halakha.

This mysterious decision to pursue a Christian, over a Jewish, abortion agenda makes sense when you consider that these organizations do not seem to be pursuing these platforms for religious reasons, but rather, for political ends. Whether in the hopes that the Trump administration will support the policies of the current Israeli government, or out of social or fiscal conservatism, or even out of a desire for access to power, the OU and the Coalition for Jewish Values have chosen to ally themselves with pro-Trump Republicans, at least when it comes to women’s healthcare. And ironically, this alliance forces these groups into positions at direct odds with halakha.

Despite this, those of us who turn to the Jewish tradition to support health care, workers’ rights, LGBT rights, and other issues are regularly accused of dressing up liberal values with Jewish text — by precisely these conservative Jews. The CJV website, for example, dismisses those who rely on “spurious references to ‘Tikkun Olam’” or on “the use of Biblical verses plucked out of context.”

There are, of course, cases in which liberal Jews offer shallow textual justifications for political positions. But anyone who has paid attention to the wealth of writing, curriculum and other materials that have emerged from Jewish social justice organizations and thinkers over the past two decades knows that many, many rabbis of all denominations are thinking seriously about what Judaism can teach us about how to respond to today’s world. This includes essays, books, lesson plans, and curricula on specific issues of civil and human rights law, and yes, even on the history and use of the term “tikkun olam.”

From my immersion in Jewish civil law, I know that halakha works hard to create a system that offers the most equity for the most people. That includes establishing laws that prevent employers from taking advantage of low-wage workers, conceptualizing a criminal justice system that protects the safety and dignity both of victims and of those accused or convicted of a crime, and developing a system of lending and borrowing that seeks to avoid predatory loans.

In some cases, halakha even challenges us to think more radically about social change. For example, the criminal justice system as envisioned by halakha does not include prison as one of the usual means of punishment, and demands proof of guilt beyond any doubt — not only beyond a reasonable doubt. Laws of tzedakah demand that every member of a community contribute at least ten percent of his or her earnings to support the needs of the poor. In contrast, most Americans — including Jews — give an average of two percent of their income to charitable causes.

This is not to say that halakha always squares with liberal positions. Some on the left, for example, have argued that Judaism promotes socialism (while others on the right argue that it endorses laissez-faire capitalism). But in truth, the predominant halakhic position supports controlled capitalism: Unlike classic Christianity, halakha does not disparage wealth or the wealthy, but does institute a number of prohibitions against becoming rich by trampling on the rights of others. As mentioned above, Jewish law sees the fetus neither as a human being, nor as something akin to the mother’s appendix. Those of us who base our liberal values on Jewish law must also grapple with and teach these nuances.

It’s no wonder that Rabbi Eliezer was intrigued by the biblical interpretation offered by Jesus’ student. Judaism and Christianity have long learned from one another, and responded to one another’s reading of biblical text, whether overtly or covertly. Furthermore, Rabbi Eliezer’s slip of the tongue may indicate that subconsciously, he had been seduced by power. An authentic Jewish approach to halakha will certainly not produce a single, uncontested reading. However, fealty to our tradition demands that we wrestle with our texts on their own terms, and through our inherited interpretive tradition, and not be seduced either by dominant Christian interpretations or by the allure of proximity to power.

Rabbi Jill Jacobs is the Executive Director of T’ruah, which mobilizes a network of 1800 rabbis to protect and advance human rights in North America, Israel, and the occupied Palestinian territories.