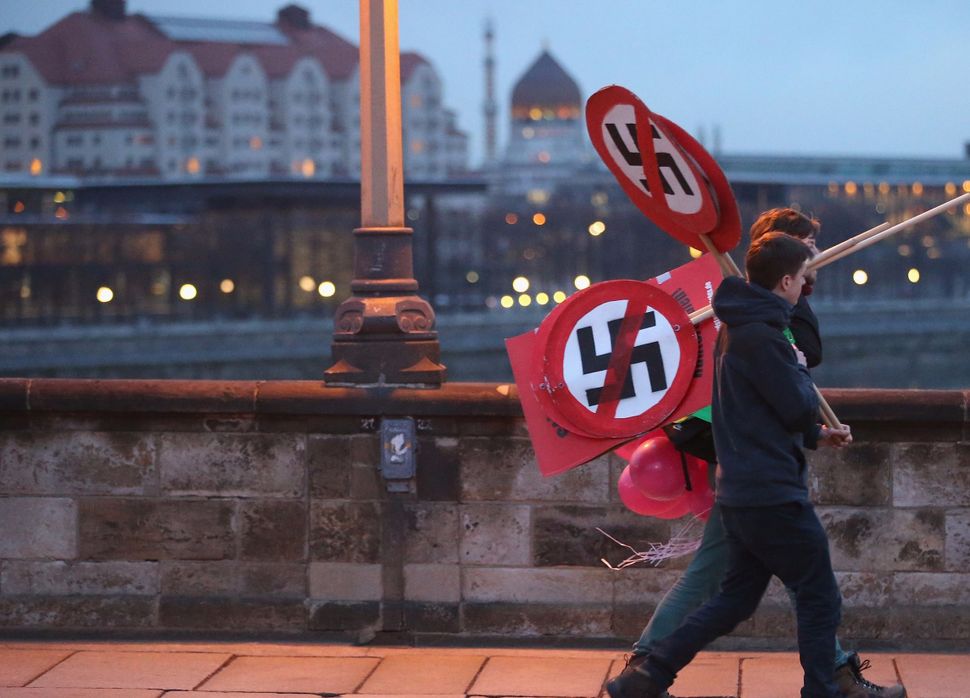 Richard Fausset’s weekend story in The New York Times about a neo-Nazi’s “normal” life in the Ohio heartland drew a barrage of complaints for soft-pedaling his odious beliefs. The Forward writes about neo-Nazis, too. So the critique echoed challenges that hit close to home.

How do we cover a loose ideological movement that is tiny but growing, extreme but savvy, representing an outburst of fresh hate but rooted in the ugly side of American culture?

It is not easy under today’s difficult reporting environment, where every move is dissected on Twitter, sometimes by people who have no idea of what it takes to be a journalist these days. I empathize with what Fausset was trying to accomplish, which even he acknowledged fell short. “There is a hole at the heart of my story about Tony Hovater, the white nationalist and Nazi sympathizer,” Fausset wrote in the same Sunday print edition where I read his controversial story.

Fausset said that the story felt incomplete because he had not been able to decode the source of Hovater’s hatred; instead, his subject was portrayed in all his banal ordinariness — shopping, cooking — while spouting dangerous and wildly inaccurate views. (Memo to Hovater: Six million Jews did, indeed, die in the Holocaust.)

Still, there were problems with this story that I hope we avoid at the Forward. They stem in part from dropping into the world of the “alt right” instead of following its everyday twists and turns, as we try to do.

It should not have come as a surprise to see neo-Nazis presented as ordinary folk with manners “that would please anyone’s mother.” My colleague Sam Kestenbaum, who writes about the “alt-right,” has interviewed Richard Spencer, the white supremacist leader who has called for a “white ethno state,” and found the same politeness.

“Spencer is cordial on the phone, and always gets back to journalists,” Sam told me. “You have to peel back the irony and performance that these guys craft. Because they are performance artists.”

That lack of critical context hobbled the story in other ways, as well. There was very little expert critique of Hovater and his ilk — only one quote from an Anti-Defamation League official, Marilyn Mayo, way down in the story.

And, as Charlie Warzel wrote in BuzzFeed, “while there’s journalistic value in illustrating the banality of hate, The Times’ profile fell short in that it largely fails to adequately address a crucial element in the rise of the far right: the internet.”

Warzel went on to specify what he found on Hovater’s social media profile: “After Trump’s victory in November 2016, for example, Hovater posted a photo on Instagram of himself outside the Trump hotel in Washington, DC, with ironic hashtags like”#ImWithHer.” During the same DC trip, Hovater posed outside the Comet Ping Pong pizza parlor — the site of the Pizzagate online conspiracy that took off across far-right corners of Reddit, 4chan, and Twitter. Hovater posted the photo of himself sporting a knowing smile without comment.”

To reference only one example of these activities, as Fausset did, means that the reader did not in fact get a full picture of the neo-Nazi next door. The internet is the collective tissue that white nationalists use to grow their movement and Fausset missed an important opportunity to analyze that in his profile.

All that said, the hysterical responses I read from some Times critics were unwarranted and unfair. Fausset obviously agonized over this story — in between covering Hurricane Harvey, Hurricane Maria and the Roy Moore campaign in Alabama, as national editor Marc Lacey acknowledged in an editor’s note.

What this story really tells us is that covering extremist movements in all their complexities poses challenges for even smart, experienced journalists, especially given the relentless demand for news and a Greek chorus on social media that feels empowered to criticize every word.

The Times can and should do better. So should we all — including those eager to pounce on every mistake and misjudgment. Like their critics, journalists are only human. Except our names are on those stories.

Race and identity. Forward readers are fascinated by issues of race and identity, and last week was no exception. The second most popular story on our website was about a Facebook group for Jewish women that kicked out a transgender woman on the grounds that she wasn’t born female.

The third most popular story was from Betsaida Alcantara, a Latina woman who works in a high level post at the ADL. She described what she said was the shocking way Jewish Voice for Peace, a far left anti-Zionist group, treated her in what she called a staged and disingenuous protest.

Underlying both these stories is the way race and Jewish identity are becoming more fluid and more challenging — from all parts of the political spectrum.

And on a personal note. After three lovely, family-filled days of Thanksgiving celebration, my husband and I yesterday had to put to sleep our beloved dog, Charlie. At 16 years old, he had long outlived his expected lifespan and we know we did the right thing, but the sadness remains. I may write more about this experience, or I may not. It still seems too raw at the moment.

Any of you with pets that you love will understand.

Looking forward. We have tickets for “Junk,” the new Lincoln Center play about Wall Street, on Saturday evening, and I was riveted by what James B. Stewart wrote in the Times last week. Riveted, and uncomfortable about the subtle Jewish stereotyping of the character based on junk bond king Michael Milken. I’m curious to see how that plays out in live theater.