Are Orthodox Jews Assimilating To The Christian Right? 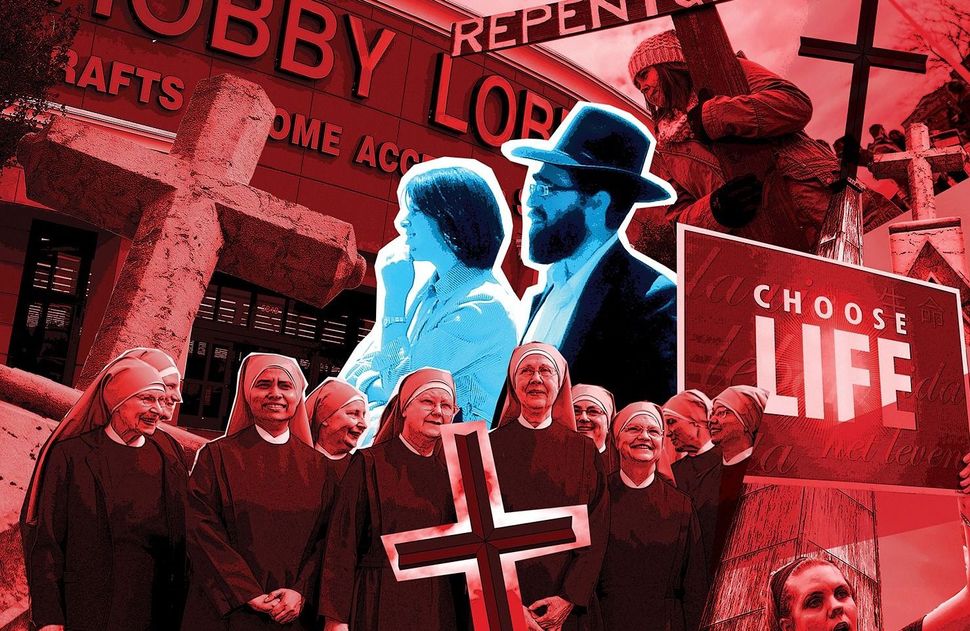 Based on this data, the Pew Research Center concluded in 2015 that “Orthodox Jews more closely resemble white evangelical Protestants than they resemble other U.S. Jews.”

We can now add support for President Trump to that list. Recall that 81% of evangelicals voted for Trump. That’s a lot more than the 54% of Orthodox Jews who voted for him. But only 24% of Jews overall did, making the Orthodox outliers among their coreligionists. And a September survey found that his support has only grown since then among the Orthodox; 71% of Orthodox Jews reported approving of the president (as opposed to just 21% of Jews overall).

In fact, in the age of Trump, the similarities between Orthodox Jews and right wing Christians have turned into an outright affinity, with Orthodox groups taking positions on issues we tend to think of as Christian. And in so doing, they are renegotiating the meaning of the separation of church and state.

So says Shlomo Fischer, a professor of sociology in the School of Education at Hebrew University and Ben-Gurion University of the Negev. Fischer wrote an article for The Jewish People Policy Institute’s Annual Assessment of 2017, arguing that Orthodox Jews have started to see their place in American society in a way that’s fundamentally at odds with their more liberal co-religionists.

“The notion that America is a Christian country scares most Jews,” Fischer said. “Not the Orthodox.”

When you ask Orthodox Jews why they voted for Trump, one reason always comes up.

Israel also explains Trump’s soaring approval ratings, according to Diament. “Anecdotally, what people talk about in the community is, Trump is not pressuring Israel on the peace process and not hectoring them about settlement expansion, which was a regular occurrence during the Obama administration,” he explained. (About Trump leaking Israeli intelligence secrets to the Russians, Diament had no comment.)

The central role Israel played in choosing Trump is something I’ve heard from dozens of Orthodox Jews. Others — both experts and insiders — blamed tensions with African Americans, or overt racism. But some of it wasn’t about worldview at all, says Samuel Heilman, professor of sociology at Queens College of the City University of New York. “A lot of Orthodox Jews have also felt that they’ve been on the wrong side, they’ve been out of power, and they want to stick it to the man, and there was some of that about Trump,” Heilman said.

A political operative immersed in the Jewish community agreed. “It’s about maintaining a seat at the table,” he told me. “Everyone wants to remain relevant.”

What’s more, with their guy in power, the Orthodox no longer need to vigilantly police what was once a central tenet of their belief system: the separation of church and state.

“The Orthodox are abandoning the separation of church and state because now, it’s working for them politically to do so,” he said. “Because they have Trump.”

Nowhere is the fitting of beliefs into politics as apparent as it is in Orthodox groups’ recent attention to women’s reproductive health.

An Orthodox group called the Coalition for Jewish Values, formed in the wake of Trump’s election, recently applauded legislation outlawing abortion after 20 weeks on the grounds that the “unborn child” can feel “fetal pain” and that “Judaism values every life, including that of the unborn child.”

The press release broke from the tradition of Orthodox organizations, which have traditionally steered clear of abortion as a topic. “Abortion has always been on the Orthodox radar but uneasily so, because, while we value even potential life, our position does not neatly overlap that of the Christian right,” explained Avi Shafran, director of communications at Agudath Israel of America. “The more radical, reactionary part of the Christian right sees a fetus as the equivalent of a born child, and in Judaism, for Jews, that’s not the case. We feel we must protect a woman’s right to rely upon a religious decision being made conscientiously to terminate a pregnancy.”

But CJV is not alone. The O.U. recently came out in support of the Trump administration’s rollback of Obama’s legislation forcing religious companies to pay for birth control.

There was a considerable response to these organizations taking these measures. Rabbi Jill Jacobs asked in a piece in these pages why Jewish organizations are pursuing Christian platforms. Others I spoke to viewed these new developments as an abandonment of the separation of church and state, while others still viewed it as proof that it was never there to begin with for Orthodox Jews.

“They were never protectors of separation of church and state,” Heilman said. “We’ve seen at least since the days of Reagan that the Orthodox have consistently been moving to the religious right in part because they are on the political right. They share many of the worldviews of the right.”

But this is not how the Orthodox organizations view their work. Quite the opposite, in fact.

And according to Mitchell Rocklin, a resident research fellow at The Tikvah Fund, this interpretation of the separation of church and state is behind Orthodox Jews’ embrace of the Republican Party, and even Trump. “The Republican Party is now seen as more protective of religious minority rights than the Democratic Party — which is quite a shift,” Rocklin said.

Big cases like Hobby Lobby and the Little Sisters of the Poor, where religious or religiously owned organizations argued that the government was violating their civil liberties by forcing them to provide birth control, abortions and sterilization, served as a wake-up call for the Orthodox community, Rocklin says, and started people thinking that these precedents might affect their minority religious rights.

This represented a shift, says Miriam Gedwiser, an Orthodox Jewish lawyer, educator and writer. “Historically, when confronted, for example, with a service provider who sought the right to discriminate against a protected class for religious reasons, most Jews might have instinctively identified themselves as potential objects of such discrimination,” Gedwiser explained. “Now, Orthodox Jews increasingly identify less with the potential customer and more with the service provider himself.”

Or, as Rabbi Pesach Lerner, president of CJV, explained in an email, “The separation of church and state means that there is no state religion; it does not mean that citizens’ views on moral issues are disqualified when their positions stem from their personal religious beliefs.”

The idea that the separation of church and state is meant to protect religious individuals from a secular government and not the other way around is another layer of tissue connecting Orthodox Jews with the Christian right. But it’s also part of a larger paradigm shift that is separating Orthodox and liberal Jews, according to Fischer.

Liberal Jews, Fischer argues in his article for JPPI, have long relied on a strategy for integrating into American society that “involves the adoption of the liberal civic virtues of tolerance, pluralism, civil and human rights, civic equality, etc., and the minimizing of cultural and religious characteristics that mark the Jews as different from the general population.”

It’s this model that the Orthodox community is rethinking. “Today, with the rising prominence of Orthodox Jews in the Trump administration, and in certain business, real estate and legal circles, we may be witnessing the rise of an alternative strategy of Jewish integration and an alternative ‘deal,’” Fischer wrote. “This strategy would likely entail alliances with other non-Jewish religious and conservative groups based upon a shared moral culture which is religiously based.”

If the liberal strategy involves a secular, civil creed, the conservative-Orthodox strategy instead sees American national identity as based on “a shared moral culture, which rests upon a religious (Protestant/Christian or Judeo-Christian) culture.”

In this strategy, Orthodox Jews view their Jewishness as participation in Judeo Christian culture — in other words, as something that connects them to American culture rather than separating them from it. They view their Orthodoxy not as a hindrance but rather as an entrance into American society, the very calling card that opens its door.

Nowhere was this more apparent than in Lerner’s explanation of how CJV sees Jewish and American values. “Clearly, the Founding Fathers were greatly influenced by what they term ‘Judeo-Christian ethics’ and based this country’s governing principles upon them,” Lerner explained in an email. “Core values such as the sanctity of life, peace, equal justice, universal education, family and social responsibility are considered the bedrock of first world civilizations. They come to humanity not from the Greek philosophers, Romans, Huns or Visigoths, but from the Jewish Bible.”

Thus, rather than an exception to Orthodox organizations, as it is seen by others in the Orthodox community, CJV is actually the apotheosis of a new kind of Orthodox Jewish American (Lerner also disputed that CJV was atypical, marshaling articles and statements from Orthodox organizations that were explicitly anti-abortion).

“Just as the conservatives of Commentary are being eclipsed in the public sphere by the Bannonites, a shift may be visible among the ideologically conservative Orthodox as well,” Gedwiser said.

It explains another thing liberal Jews don’t understand about their Orthodox brethren — their tolerance of figures like Bannon, whose site, Breitbart, is home of the “alt-right” — viewed by liberal Jews as anti-Semitic. It’s not only that Bannon is a professed Christian Zionist that makes him acceptable, though this is a big part of it. For Orthodox Jews, Bannon doesn’t symbolize anti-Semitism at all, but rather a Judeo-Christian view of America that includes them.

Accepting the Judeo-Christian model of American identity also means a tolerance for models of ethno-nationalism like the kind espoused by someone like Bannon. “I think they are much more willing to accept the fact that Islam in its more political versions is a common enemy and opposed to the kind of civilization that we accept,” Fischer explained. “Orthodox Jews are less politically correct in general and less concerned with that. I don’t want to make them out to be racist or Islamophobic, but they are open to the idea that there is a struggle of that sort.”

This is because tolerance has brought perceived threats to religious folks, like same-sex marriage, or even Muslims, in their view. The Orthodox Trump supporters view themselves as facing the same threats as Christians — as opposed to the threats their liberal brethren identify with, like those posed to Muslims or immigrants.

And in so doing, they are separating further and further from liberal Jews, assimilating instead with their Christian counterparts.

“The shock seems to come from liberal Jews’ basic assumption that a less tolerant America is worse for Jews,” Gedwiser said. “But to the Orthodox Trumpists, the opposite is true.”

Are Orthodox Jews Assimilating To The Christian Right?