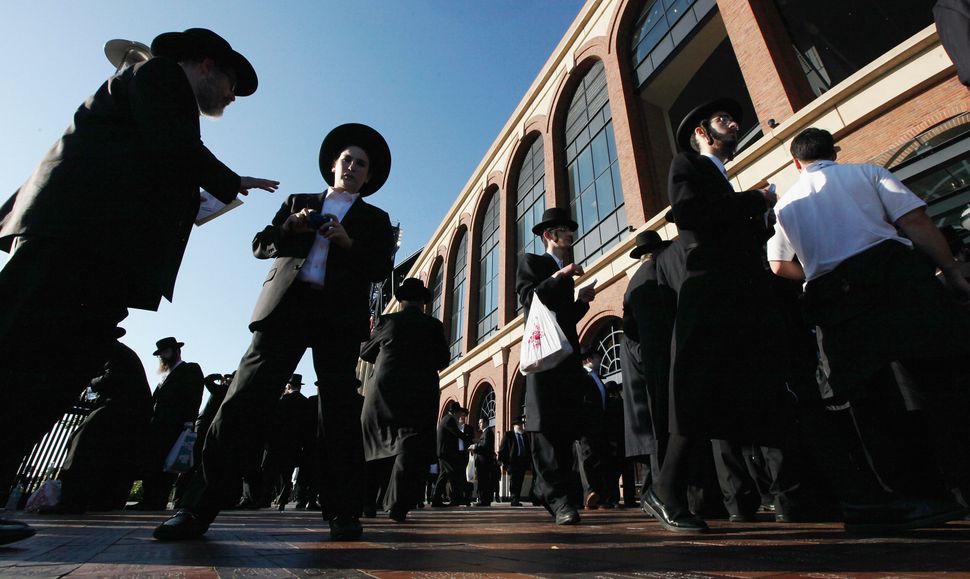 But the revelation in a report released today by the Pew Research Center is that Orthodox Jews vote, believe, worship, act and raise their children more like white evangelical Protestants than like their fellow Jews.

Another key finding in the report, which analyzes data collected for Pew’s 2013 survey A Portrait of Jewish Americans indicates that while their beliefs and unique lifestyle set apart Orthodox Jews, their growing numbers may affect the way the entire Jewish community is perceived.

“If the Orthodox grow as a share of U.S. Jews, they gradually could shift the profile of American Jews in several areas, including religious beliefs and practices, social and political views and demographic characteristics,” the report cautiously predicts.

Sarah Bunin Benor of Hebrew Union College –Jewish Institute of Religion offers a more blunt prediction: “When Orthodox Jews will be a bigger percent of the Jewish community, people’s thinking will have to shift,” she said. “Who we think of as typical Jews will have to change.”

The snapshot of the Orthodox community provided by the Pew report portrays a group made up of two separate communities — the Modern Orthodox, who are involved in secular American life, and the more numerous Haredim, also referred to as ultra-Orthodox, who are more insular. Among the many aspects these two groups share is their rapid growth, their emphasis on marriage and families, their relative political and social conservatism, and their preference for Jewish education for their children.

When it comes to beliefs and practices, the differences between Orthodox Jews and all others — including Conservative, Reform, Reconstructionist and those who consider themselves Jewish with no religion — become stark.

Asked about the importance of religion in their lives, 83% of Orthodox Jews say it is a very important factor, while only 20% of non-Orthodox Jews say so. By contrast, 86% of white evangelicals replied positively to this question.

On Israel, 84% of Orthodox Jews and 82% of evangelicals believe Israel was given to the Jewish people by God, while only 35% of non-Orthodox Jews hold this view.

This pattern also plays out on the political level. Orthodox Jews and Christian evangelicals share an affinity with the Republican Party (57% and 66%, respectively, support or lean toward the GOP), as opposed to a mere 18% of non-Orthodox Jews who back Republicans.

This distance from the broader Jewish community, said Rabbi Avi Shafran, director of public affairs at Agudath Israel of America, is neither a concern nor a source of pride for Orthodox Jews.

“We don’t take any joy in being on the other side of many issues, but to the extent that some of our positions are firmly based on the Jewish religious tradition, we feel we are standing up for what Judaism meant to all Jews for millennia,” Shafran said.

Similarly, evangelical Christians are also far apart from most denominations in their faith, according to Michael Cromartie, vice president of the Ethics & Public Policy Center.

Alan Cooperman, Pew’s director of religion research, who co-wrote the study with Becka Alper, stressed that the similarity between Orthodox Jews and evangelical Christians should not be overstated. “We don’t think that in general, Orthodox Jews are similar to evangelicals, but that they are alike in some particular ways,” he said in an interview.

These similarities are nothing new for activists who have been working together for years, primarily on issues relating to Israel. Christians United for Israel, a national pro-Israel organization established a decade ago, has been mobilizing evangelicals to support Israel politically and financially. Even before CUFI emerged, Rabbi Yechiel Eckstein, who is Orthodox, founded the International Fellowship of Christians and Jews, which has raised $1.3 billion for programs aiding Israelis and Jews in need.

Eckstein said in an interview that while the liberal Jewish establishment shunned his efforts to reach out to evangelical leaders such as Pat Robertson and Jerry Falwell, Orthodox Jews were “noncommittal to positive” in their response. The reason, Eckstein explained, is that Orthodox and evangelicals share concern “that life in America is becoming too devoid of faith and religion in the public square.”

The Jewish communal mainstream has since accepted evangelical support for Israel, but often the partnership doesn’t go beyond that. Eckstein blames Jewish organizations for wanting to “milk evangelicals” for funding and support, while refusing to recognize them as true allies.

But Cromartie reminded them that despite their shared belief with evangelicals on the primacy of the Bible in setting moral and practical values, Orthodox Jews still have significant differences. “At the end of the day,” he said, “the theological difference about the New Testament and about who historical Jesus was still remains, and that’s a pretty big one.”

Similarities between Orthodox Jews and evangelical Christians are only one part of the extensive look provided by Pew into the demographics and views of American Orthodox Jews. The most staggering finding was the Orthodox community’s strong growth numbers, which could have a long-lasting impact on the composition of Jewish America.

Orthodox Jews make up 10% of all Jews in America, significantly less than Reform (35%), Conservative (18%) and Jews with no denominational affiliation (30%). But a closer look explains how Pew researchers reached the conclusion that “Orthodox Jews probably are growing, both in absolute number and as a percentage of the U.S. Jewish community.”

“If the Orthodox grow as a share of the Jewish community,” Cooperman said, “there’s certainly the potential over time to change the face of American Jewry.”

This changing face, experts believe, will bring more Orthodox players into the communal world, but it is unlikely to bring about a major shift in Jewish politics, which is currently by and large Democratic and liberal. “It would be irresponsible to say that the Orthodox growth will have an immediate impact on the political composition of American Jews,” Cooperman said, noting that current trends will move the political needle only slightly.

But Orthodox Jews are certainly more visible. The signs are already here: A Modern Orthodox Jew was chosen as top executive of New York’s Jewish federation, and Orthodox donors, Modern and Haredi, are playing an increasingly significant role in Republican political fundraising.

Benor believes the community needs to be aware of this demographic change and that it needs to understand that Orthodox Jews will be part of the future leadership and support base of Jewish organizations. “It’s in the interest of the Jewish majority to engage Orthodox Jews in these organizations to ensure the sustainability of the organizations when Orthodox play a more central role,” she said.

But while the new analysis indicates a more prominent role for Orthodox Jews in the community, Cooperman pointed to another group in the ascendant — Jews of no religion, which is how 22% of American Jews identify. They are the mirror image of Orthodox Jews: nonobservant, liberal, with weak ties to Israel, a low fertility rate and a reluctance to send their children to Jewish schools. “It’s possible,” he said, “that in the future we will have a Jewish community which is more Orthodox and at the same time has more members with loose Jewish connectionS, and an increasingly shrinking middle.”