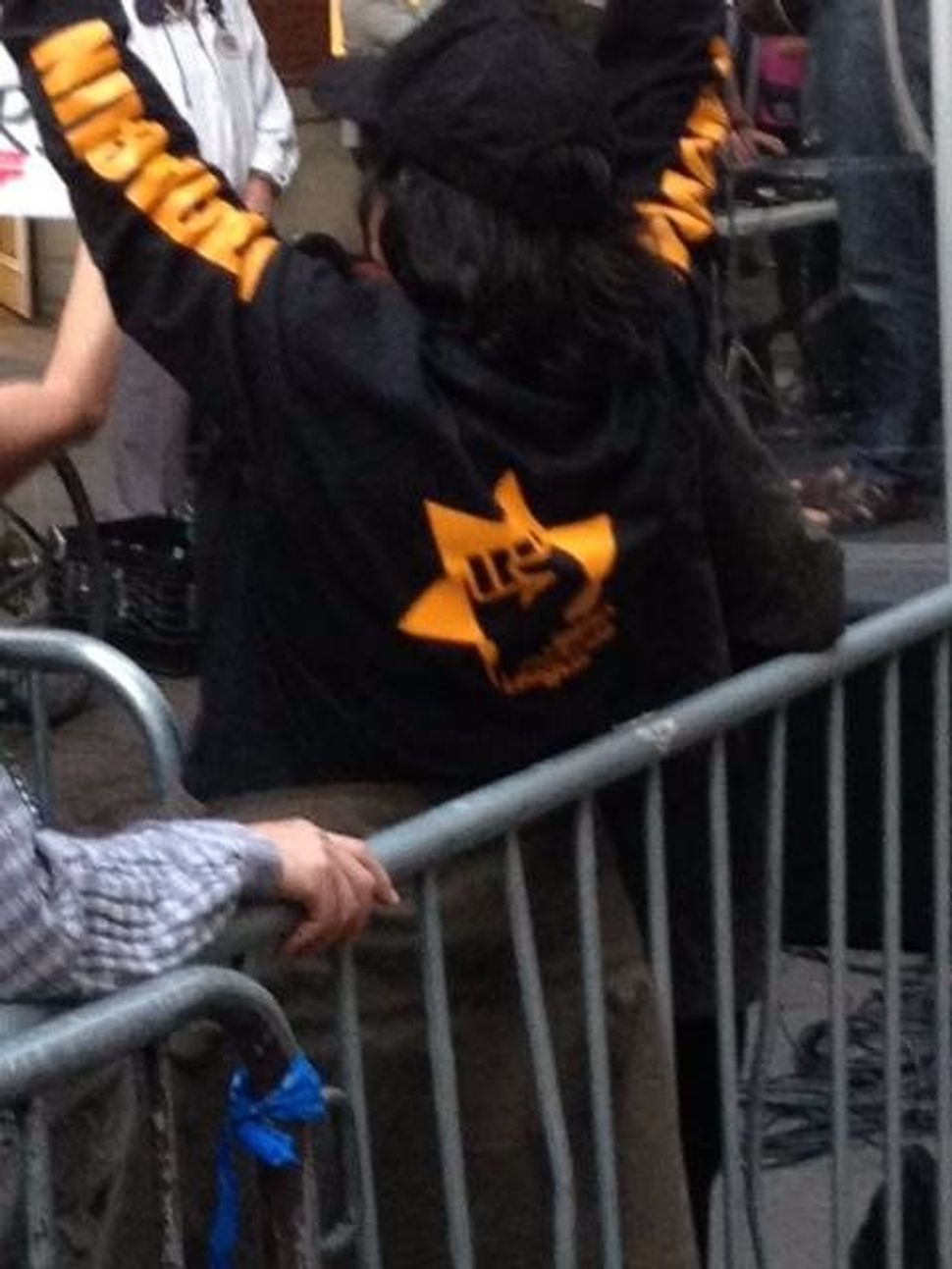 Person in JDL shirt at protest against Center for Jewish History. Image by Shaul Magid

On Tuesday of last week at around 2 in the afternoon, Facebook took down the page for the New York chapter of the Jewish Defense League, a far-right organization that purports to protect Jews from anti-Semitism “by any means necessary” – which often includes violence.

Karen Lichtbraun, a 57-year-old member of the group, had been trying to log on to get the word out about a protest she had organized for that evening. The protest was to take place outside the New School at an event called “Anti-Semitism and the Struggle for Justice” which featured speakers from Jewish Voice for Peace, Jews for Racial and Economic Justice and that favorite bogeywoman of the Jewish right, Linda Sarsour.

Sarsour has been on the receiving end of an extreme amount of negative attention from the Jewish right. Mort Klein of the Zionist Organization of America called her a “bigot” and an “extremist”, while Lahav Harkov of the Jerusalem post called her “the queen of hate”, and the right wing Jewish digital publication Algemeiner published ten articles about her in the month of July alone. None of them were complimentary.

When I told Sarsour that the JDL had been blocked, she chuckled.

But that wasn’t my response. I’ll admit something here: I follow the JDL on Facebook. It’s not because I’m interested in participating in their activities. It’s because I like to know what they’re up to. I’m curious about who their targets are, and I want to know where they are placing their attention.

So when Facebook removed the JDL’s Facebook page, leaving Lichtbraun platformless to promote her protest of Sarsour and the New School event, I – a lefty and a student — wasn’t one of those whose said good riddance. I wanted them back on Facebook.

After white nationalists marched in Charlottesville this August, Facebook took stock of how it deals with hate groups. Zuckerberg wrote on his own Facebook page that “any post that promotes or celebrates hate crimes or acts of terrorism” would be taken down. Not long after, Facebook asked the Southern Poverty Law Center, which monitors hate groups around the country, for its list. The JDL was on it.

The history of the JDL is well known. It developed its domestic terrorist tendencies in New York City under the auspices of the ultra-nationalist Rabbi Meir Kahane, who founded the organization in 1968 and advocated for the ethnic cleansing of Palestinians. The group was known for engaging in violent tactics; after Kahane’s assassination in 1990, his successors confessed to a bomb plot that would have targeted the Muslim Public Affairs Council, the King Fahd Mosque, and the office of Congressman Darrell Issa — all in California.

The FBI stopped keeping a domestic terrorism list in 2001. But even if it still kept one, I don’t think the JDL would be on it. They are mostly dormant these days. And in New York, Lichtbraun insists, “all of our protests have been peaceful protests.”

Still, some branches are more violent than others. The SPLC includes the Los Angeles chapter on its hate map, but not the New York one. Last year, countering an AIPAC protest, JDL members with masked faces violently attacked protestors, sending one middle-aged Palestinian-American man to the emergency room. Meir Weinstein, who runs the JDL in Canada, claimed the attack was in self-defense, though video footage posted by the Forward proved otherwise.

Weinstein helped Lichtbraun open the New York chapter. But the JDL in New York is far more innocuous than its Canadian counterpart. The protests Lichtbraun organizes are tiny — usually no more than ten people — and its adherents are mostly over 55, like Lichtbraun herself.

Even Sarsour says that the New York JDL, which shows up at every event she does, hasn’t made her feel physically unsafe. “I don’t feel threatened by them,” she said. “I always have security with me and at the New School I didn’t see them at the main entrance. I came in the back door.”

In general, Sarsour is fine with people protesting her. “People have a right to protest so long as they don’t engage in hate speech or violence against me or anyone else,” she said.

Still, Sarsour believes that the JDL, like “any group that preaches hate,” deserved to be shut down.

A spokeswoman for the SPLC agreed. She told me that violence isn’t the criteria they use to define a hate group; ideology is.

“A lot of white supremacist or neo-Nazi groups whose views are heinous – calling for genocide of Jews – aren’t directly tied to violent acts or hate crimes, and it would be a little absurd to put out a hate list without those groups on it,” she said. And the JDL, she said, are “rabidly anti-Muslim and anti-Arab.”

She’s not wrong, if we’re speaking generally. In a phone call, Weinstein of JDL Canada spoke to me at length about jihad, terrorism, radical Islam, radical Iran and how the wave of Muslim immigration to Europe was on its way to America. He called the protestors at Al Quds day, the day he spends much of his time organizing around, “mobs of radical Islamic groups.” In a few weeks he is planning an event with well-known Islamophobe Pamela Geller and is planning a movie screening for “Killing Europe” which decries multiculturalism, feminism, Antifa and (of course) Islamic jihad as the destroyers of Europe. Weinstein described the movie in an online video, as documenting “threats that exist in Europe to the whiter population and the Jewish community”. He expects protesters of “various so-called anti-racist groups. I say so-called because they’re together with the Antifa and they have an agenda and they support radical Islamic organizations.”

So I can’t say I was surprised when Weinstein’s Canada Defence League page was taken down last week. It had been taken down twice previously. Weinstein said Facebook had informed him it was because he had posted a picture of Rabbi Kahane. This week, his personal page was taken down. He got a standard Facebook screen with possible reasons for the block: “Support for a violent and/or criminal organization” and “credible threats to harm others” were the top two options.

It’s almost excruciating to write a defense for the JDL’s right to anything. I know the JDL network and ideology is often violent. I recognize that Islamophobic messages are ever-more dangerous when we have a president who refuses to condemn attacks on American Muslims. All of this makes defending the New York DefenSe League’s right to a Facebook page like trying to cut off the skin of a rotten peach — incredibly slippery.

But there are real reasons why I still think Facebook was wrong to shut them down — certainly the New York chapter, and perhaps even the violently anti-Islamic Canadian one.

First, they’re not going away. They have websites. They’re on YouTube. On the phone, Weinstein told me he could always put up another Facebook page “one-two-three”, no problem. I believe him. It’s the same with neo-Nazis. One page is shut down, and another appears in its place, often with renewed support.

Secondly, Facebook is the public square of our time, and Facebook, a corporation, should not be the one to determine who gets to be in and who is forced out of that square. We need now more than ever an open discourse that can air out hate.

Who should police the discourse (and take down pages) is a terrific question. We don’t want Nazis calling for genocide on Facebook. We don’t want the KKK live streaming ceremonies. But I don’t think Facebook should be the one to police itself. For starters, that is not a method that has proven effective. And what’s more, I don’t want the New York JDL to go underground. I want to know what Lichtbraun is up to. I want to expect her. I want to follow her on Facebook.

Finally, at least in the New York chapter, I do not think Facebook’s removal of the page can be justified on the grounds of hate speech. The page has been mostly mundane updates about protests. And Lichtbraun is disinclined to amp up the violence. When I asked her if she saw the JDL as extreme, she said no. “Extreme would mean violence,” Lichtbraun said, “on the left, right or middle.”

Meanwhile, Tuesday’s modest protest of Sarsour happened as planned. Lichtbraun was quoted in the press as saying that the anti-Semitism panel was “spitting in the face of Jews” and calling all four panelists, three of whom were Jews, “anti-Semites talking about anti-Semitism.” She stayed until the very end so that she could sneer from behind the police barricade. “Wasted $5,” she told attendees. “Shoulda given it to the homeland.”

Facebook did not respond to requests for comment about why they took down Lichtbraun’s page. When I asked Sarsour why she thinks they did, she speculated: “Karma. I don’t know. A good Samaritan?”

Elisheva Goldberg is a freelance writer living in New York. She was formerly an editor and analyst at Molad: The Center for the Renewal of Israeli Democracy, and an assistant editor at Open Zion.