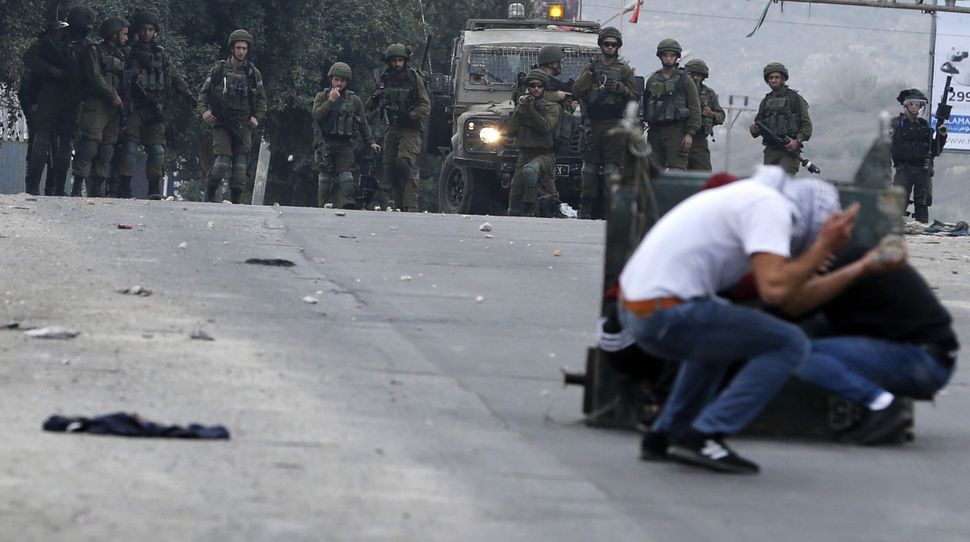 Last March, a Palestinian man fatally stabbed a tourist walking near the Tel Aviv coast. It was five months into the “Intifada of the Knives,” the name given to the spate of Palestinian attacks on Israelis that began in October 2015. By March 2016, these types of near-daily random stabbing acts had become just another violent chapter of the Israeli-Palestinian conflict, indistinguishable from all the rest.

The death of this tourist, however, was different. The victim’s name was Taylor Force, and he was an American combat veteran on a study trip to Israel. In the aftermath of his gruesome death, ensuring accountability for the death of Force became a celebrated cause in Congress. Senators and Congressmen rushed to condemn the stabbing attack, and praise Force for his service. Six months after the murder of Force, Senator Lindsey Graham (R-SC) slapped his name on a bill, called the Taylor Force Act, that would cut U.S. aid from going to the Palestinian Authority because of the authority’s practice of giving payments to militants and their families. On December 5, the House unanimously passed the act. The Senate is expected to pass it before the end of the year, and Trump administration officials have said the president supports the bill.

But not all American deaths in Israel-Palestine are treated equally — and the difference in reaction to the killings of Palestinian-Americans by Israeli forces is a stark reminder of how little Palestinian life is valued in the U.S. Congress. When Americans of Palestinian descent are shot dead by Israeli soldiers, no Senators or Congressmen rush to press for accountability from Israel’s army, or put the names of Palestinian victims on legislation that would tie U.S. aid to Israel to policy changes.

11 days before Force’s death, another American citizen was killed in the holy land — by an Israeli soldier. Mahmoud Shaalan was a 16-year-old teenager from Florida who had moved to Deir Dibwan, his family’s village near Ramallah. On February 26, 2016, an Israeli soldier fatally shot him at a checkpoint while Mahmoud tried to cross on his way to visit his aunt. The army said Mahmoud tried to stab a soldier. But a witness I spoke with as part of my investigation into the killing for The Intercept said that Mahmoud was shot when his hands were up, and that he had no knife out. A Palestinian ambulance driver who arrived to the scene shortly after the shots were fired said Israeli soldiers shut down the checkpoint where Mahmoud was killed and prevented medical workers from accessing Mahmoud as he lay on the ground, bleeding. Mahmoud died later that day.

Unlike the killing of Taylor Force, Mahmoud’s death passed with no condemnation from Senators or Congressmen. Florida Senators didn’t say a word. Neither did Florida Congressional representatives, including those who represented the district where his father, Mohammed, or his uncle, Salman, who has taken the lead on advocating for the family, lived. (A spokeswoman for Congressman Tom Rooney, the representative at the time of Mahmoud’s killing for Salman Shaalan, told me the Congressman reached out to the State Department after the incident for information about the killing. Rooney did not say anything publicly.)

To be fair, the circumstances of Force’s and Shaalan’s deaths are different. There is no question that a Palestinian militant stabbed Force to death for no reason. In the case of Shaalan, there is an irresolvable dispute between the witness’ account of the killing and the Israeli military’s story.

But members of Congress could have easily, and publicly, demanded answers from the Israeli army to a number of outstanding questions: Why is there no video footage of the death? (The army told Politico a security camera was not in range to capture the killing, but human rights advocates are skeptical of that claim.) Why did the Israeli army close an investigation into Mahmoud’s death in September 2016, and decide not to press criminal charges against the soldiers responsible for the death? What evidence did they use in making that decision? (The army has since reopened its inquiry, after the witness testified to the army about what he saw.) Why did the military allegedly halt medical workers from helping Mahmoud? Did a soldier use excessive force on a 16-year-old?

Instead, members of Congress were silent, even as the family pursues accountability in the U.S. and Israel. It’s a fair bet that if a Palestinian Authority police officer shot an American to death in disputed circumstances, Congress would be up in arms. At the very least, they would be asking questions.

This double standard in reactions to the deaths of Americans in Israel-Palestine has become a pattern. In October 2014, Israeli soldiers killed Orwa Hammad, a 14-year-old Palestinian-American from Louisiana. The army said Hammad was throwing a Molotov cocktail at the time of his death. Palestinians said he was among a group throwing rocks at soldiers. Once again, there was no Congressional outrage, and no questions raised about yet another incident where heavily armed soldiers shot a teenager to death.

There have been sporadic efforts to hold Israel accountable for its misuse of U.S. military aid. Senator Patrick Leahy, for instance, has repeatedly called on the U.S. to apply the Leahy Law, a bill he wrote prohibiting U.S. military aid from going to military units that abuse human rights, to Israel. But human rights advocates say the U.S. has failed to do so — a failure that has shielded Israel from accountability over its treatment of Palestinians.

By contrast, the Taylor Force Act, which is about holding the Palestinian Authority accountable for how it uses U.S. aid, is on a fast track to President Trump’s desk. The message this sends is clear: The U.S. Congress cares deeply about Americans killed in Israel-Palestine—but only if the assailants are Palestinian militants.

And when Palestinian-Americans are shot dead by Israeli soldiers? Congress shuts its mouth. And U.S. military aid continues to flow unimpeded to Israel, no questions asked.

Alex Kane, a former editor at Mondoweiss and AlterNet, is a New York-based freelance journalist whose work has appeared in Haaretz, the Los Angeles Review of Books, The Intercept, VICE, Al Jazeera America and more. Follow him on Twitter @alexbkane.