Muslim Anti-Semitism In Europe Hurts Jews. But So Does Islamophobia 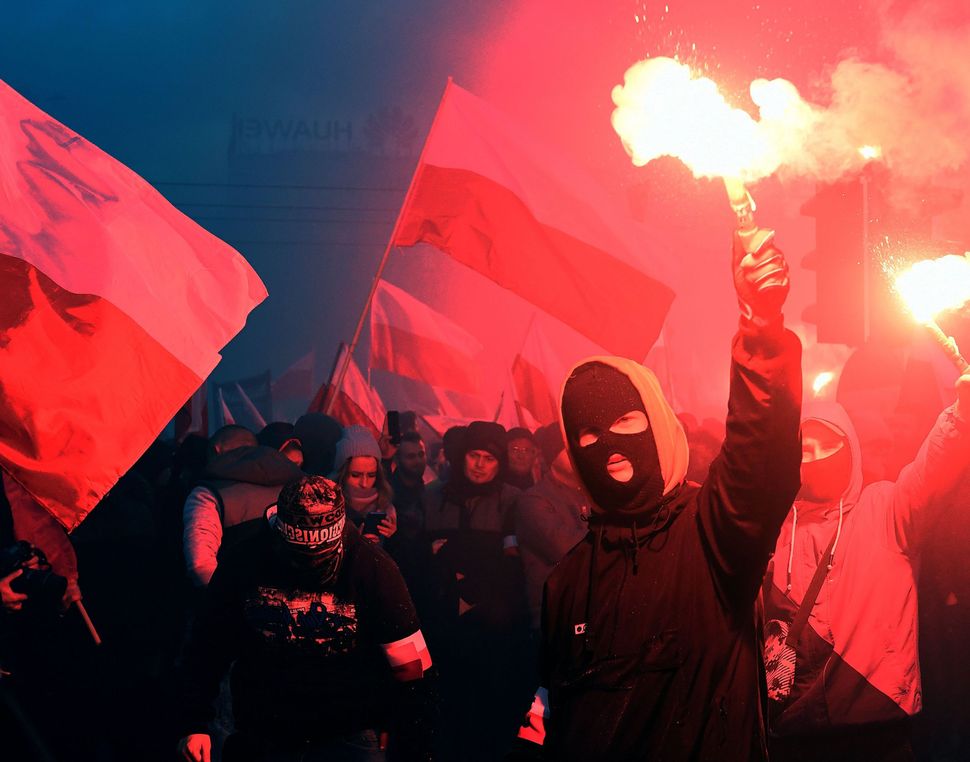 As the new Austrian government was being sworn in on Monday, bringing the far-right Freedom Party (FPÖ) back into power for the first time since 2005, thousands partook in resistance demonstrations across Vienna. Among those protesting against the introduction of a twelve-hour work day, tuition fees for college students, and reductions in benefits for asylum seekers was the Austrian Union of Jewish Students (JÖH), who marched with other anti-fascist groups, eventually converging on the city’s central Heldenplatz.

“This government is a shame and a scandal for Austria and Europe,” JÖH co- President Benjamin Hess said at the rally, warning that the FPÖ is using a pro-Israel posture to obscure the hate that exists within its ranks—including anti-Semitism. “We cannot allow ourselves to sit back and say ‘it won’t be so bad’ or ‘what can I do as just one person.’ Never again can we, as a democratic civil society, be powerless for the price we must pay is simply too high.”

One year ago, after Donald Trump had won the American presidential election, there was a fear among many — myself included — that Europe might also give in to populist temptations. Electorates would either lift the far-right into government or grant them enough authority to disrupt the political system. But in the Netherlands and Germany, populist parties could not gain more than 13 percent of the vote. In France, Marine Le Pen was thumped in the second round of the presidential election, losing to Emmanuel Macron by a 2-1 margin. The far-right was shut out.

But to call this a victory for European liberalism would be to ignore that the center of gravity for far-right populism today rests not in the west of Europe but the center and east. Jarosław Kaczyński’s Law and Justice (PiS) party and Viktor Orbán’s Fidesz, both anti-democratic and ultra-nationalist in character, have entrenched themselves in Poland and Hungary. While not of the far-right, European leaders in Brussels are waiting to see what populist billionaire businessman Andrej Babiš will do as the Czech Republic’s new prime minister—and much the same can be said of Austria’s new government too.

Europe’s Jews, however, can look to Poland and Hungary to see what the spread of populism might mean for them. In 2017, Orbán stepped up his anti-Semitic campaign against the billionaire philanthropist George Soros, alleging among other things that he is backing a plan to settle a million migrants a year in Europe while paying them thousands of Euros. On Poland’s Independence Day in November, around 60,000 ultra-nationalists marched through Warsaw, bearing Christian iconography and promoting a “white Europe of brotherly nations,” all the while chanting “pure Poland, white Poland” and “refugees get out.”

The most obvious threat to the safety of European Jews remains extremist, radicalized elements within Europe’s Muslim communities—themselves a target of far-right populist ire. The incendiaries launched into synagogues in Gothenburg and Malmö last weekend are just one example of the kind of violence visited upon anything identifiably Jewish. In Amsterdam this month, a man holding a Palestinian flag and wearing a keffiyah smashed in the windows of a kosher restaurant. In April, Sarah Halimi was tortured to death before her body was thrown out of a third-story window in Paris. The murderer, Kobili Traore, was reported to have chanted Islamic prayers and Quranic verses as he killed Halimi.

But far-right populism is a threat to European Jewish life in a different sense. To be a minority in a society, whether racial, religious, or sexual, is to depend upon certain democratic norms: freedom of speech and assembly; political and religious pluralism; the rule of law; police and judicial independence; protection under law and an understanding that if offences are reported authorities will treat them seriously. Far-right populism seeks to undermine those conditions, weakening public trust in people and institutions to create the chaos that allows them to overturn the existing order. The result of this is to remove the structures and protections that make Jewish life possible.

The far-right has also created a hostile atmosphere in which to be a minority. Soros’ Open Society Foundation has spoken of an “officially accepted anti-Semitism” in contemporary Hungary, though Orbán has long targeted refugees. “Poisonous anti-refugee rhetoric is reaching fever pitch,” Amnesty International’s Europe director John Dalhuisen has said, with asylum seekers subject to appalling treatment and labyrinthine bureaucratic procedures. Much the same goes for Poland, where the government has spoken of refugees as a ticking time bomb that needs to be defused. Kaczyński has said that to admit refugees to would be to “completely change” Polish culture.

For Polish Jews, two years of PiS rule has meant having to “deal more extensively” with anti-Semitism, president of the Jewish Community of Warsaw Anna Chipczyńska told me recently: “phone calls, letters, offensive and vulgar slurs, anti-Semitic graffiti. There is no week, no day, without getting an offensive email,” she said. There is, in Poland today, a permission to discriminate. To attack one minority—whether gays and lesbians, asylum seekers, or Muslim women—is to attack them all. Even if Jews in Poland or Hungary are not the intended targets, they have become victims in the end.

There can be no complacency, then, when it comes to the danger far-right populist parties pose to the lives of minorities in Europe—including Jews. Hess said at Monday’s rally against Austria’s new right-wing government, “We must fight back against racism, discrimination, and hate, whether it is us or others who are affected, whether we like the affected parties or not, whether we supposedly benefit from the hatred or not.”

And he was right.

Liam Hoare is a frequent contributor to the Forward based in Vienna, where he is the Europe Editor for Moment.

Muslim Anti-Semitism In Europe Hurts Jews. But So Does Islamophobia