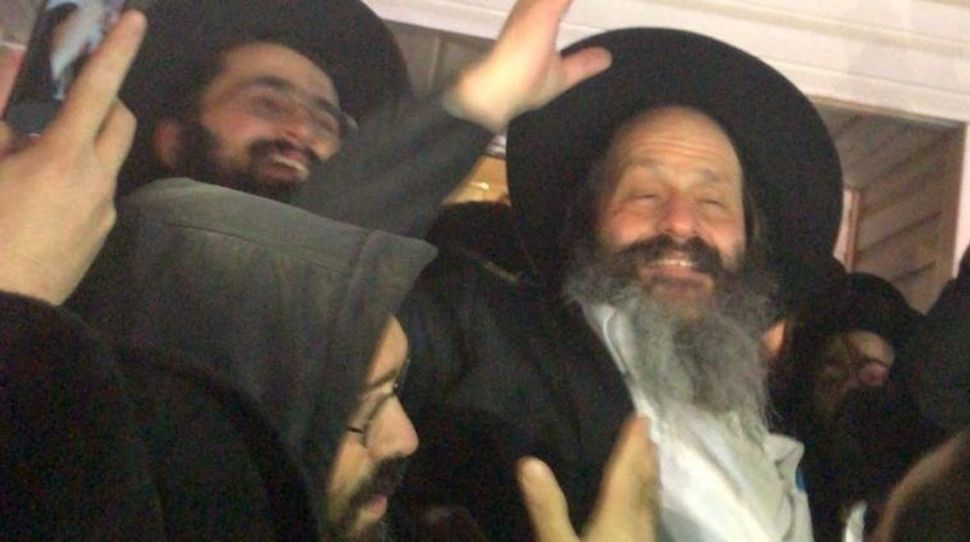 Yesterday President Donald Trump announced he would be commuting the sentence of former executive of a meat packing plant imprisoned for bank fraud.

There was a great deal wrong with the sentencing, which was longer than most rapists and murderers receive. Dozens of judges, lawmakers and politicians sprang to his defense, asking for leniency, and eventually getting it in the form of Trump’s announcement. This announcement, in addition to the Jerusalem declaration and Nikki Haley’s defense of it at the United Nations has likely indefinitely endeared Trump to the right-wing Orthodox world.

Flying through the streets of Brooklyn last night were giant “TRUMP” flags in celebration of the announcement. Given the offenses of Rubashkin — who was convicted of 86 counts of fraud and had charges dropped of 72 immigration charges and 67 counts of child labor law violations — the whole display was an incredible chillul HaShem.

Let’s take a minute to remember the conditions at his plant, reported in 2006 by the Forward:

One of those workers — a woman who agreed to be identified by the pseudonym Juana — came to this rural corner of Iowa a year ago from Guatemala. Since then, she has worked 10-to-12-hour night shifts, six nights a week. Her cutting hand is swollen and deformed, but she has no health insurance to have it checked. She works for wages, starting at $6.25 an hour and stopping at $7, that several industry experts described as the lowest of any slaughterhouse in the nation.

Juana and other employees at AgriProcessors — they total about 800 — told the Forward that they receive virtually no safety training. This is an anomaly in an industry in which the tools are designed to cut and grind through flesh and bones. In just one month last summer, two young men required amputations; workers say there have been others since. The chickens and cattle fly by at a steady clip on metal hooks, and employees said they are berated for not working fast enough. In addition, employees told of being asked to bribe supervisors for better shifts and of being shortchanged on paychecks regularly.

Is the man behind these conditions a person worth celebrating?

He is not. As my friend Moty Raven put it, “I want a community who stands up for justice and fairness, not one who parades around a man who violated child labor laws, mistreated thousands of workers, [de]frauded many, and who repeatedly flaunted the law in many other ways.”

We should be better.

In response to the conditions being exposed for all to see, why didn’t the Orthodox world take it upon themselves to improve plant conditions for those who provide the meat for our Shabbat and Yom Tov meals?

Instead of using resources to make change for the better for animals and plant workers alike, Rubshkin’s release became the focus and the cause. That means that in an Orthodox community mired by scandal over financial fraud, most recently in the New Jersey township of Lakewood, one of the top priorities became freeing a fraudster.

Rubashkin’s defenders claim their work simply rights a wrong — the fact that he was targeted by prosecutors and sentenced overly harshly. I’ve seen many point to conditions in prison and declare them inhumane.

So instead of working to improve those conditions for all, the community instead laser-focused on Rubashkin’s release.

Would they have done the same for a Reform Jew wrongfully sentenced in inhumane conditions? This isn’t just a rhetorical question; we have the answer. In 2009, Alan Gross, a contractor employed by United States Agency for International Development, was wrongfully arrested and imprisoned in Cuba. The conditions of his imprisonment were truly inhumane, and yet, there was only one story about Gross on Crown Heights Info, a two paragraph note quoting ABC News at length. Another right-wing Orthodox outlet, Yeshiva World News, gave Gross a bit more ink, but their stories garnered little engagement. Upon his release, one commenter remarked, “I am curious as to why there was never an Atzeres Hatfilah to daven for his release and why the frum ignored his plight. Only when a frum yid is in trouble do we really care.”

Of the seven other comments on Gross’s release story on Yeshiva World News, three referenced their desire for the release of Jonathan Pollard next.

Why is it Rubashkin and Pollard engendered such sympathy, yet Gross received hardly any? It seems clear it was Rubashkin’s Chabad ties and his charitable giving. Despite his violations of Jewish law as they pertain to ethics and finances, Rubashkin is still considered religious because of his observance of kashrut and Shabbat.

That is apparently — and sadly — enough.

Just because Rubashkin should not have been incarcerated for as long as he was does not make him a hero worthy of a hero’s welcome in Brooklyn. The fact that that is what he received from his community says a great deal about its priorities, and none of it is good.

Correction: An earlier version of this article mistakenly stated that Rubashkin was acquitted of immigration charges. We regret the error.