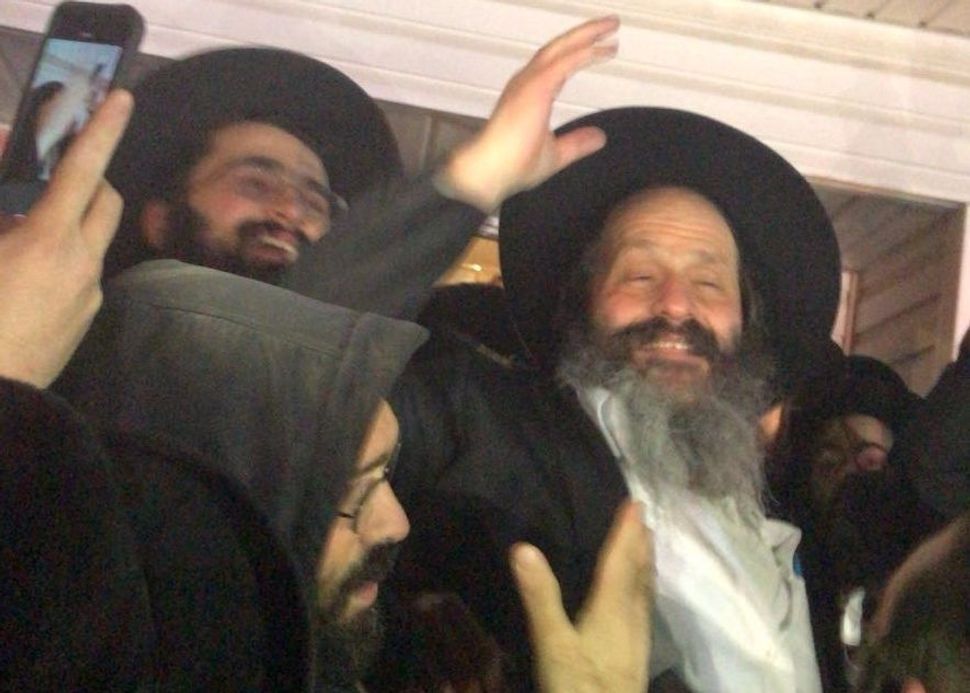 Sholom Rubashkin was greeted by well-wishers upon his return to his home in Monsey, New York. Image by WhatsApp

The celebrations in Orthodox Jewish communities of President Trump’s commutation of Sholom Mordechai Rubashkin’s prison sentence and the release, after eight years, of the former CEO of the Agriprocessors meatpacking plant in Iowa have subsided.

But not before they engendered a rank venting of resentment in other Jewish circles over Mr. Rubashkin’s new freedom. Mr. Rubashkin’s business, said Conservative Rabbi Morris Allen, “was built on the exploitation of his immigrant labor force, indifference to the environmental damage caused by his plant, and unnecessary pain and suffering for the animals that he slaughtered.”

Conservative Rabbi Jill Jacobs was also skeptical. “What would more appropriate punishment for Rubashkin be?” she tweeted. “Maybe many long years of working hardest job at his factory,” she suggested, “doing crap work for a workers’ rights or immigrants’ rights.” She let her followers know that she would be “taking suggestions for other punishments that would push him toward teshuva,” or repentance.

And in a Newsweek opinion piece, “Open Orthodox” Rabbi Shmuly Yanklowitz described his personal “shock” at Mr. Rubashkin’s release, citing the “stain” on the kosher food industry the meatpacking executive caused by the “frequent citations for illegal practices including violating wage laws and child labor laws, the abuse of animals, food safety violations, and environmental laws.” (Yanklowitz also attributed to me the sentiment that “people want kosher meat that tastes good and is cheap, but don’t care about the ethical route it took to the plate.” I never said nor implied any such thing.)

But these reactions of liberal Jews to a fellow Jew’s liberation from prison are not just troubling. They are deeply tragic.

Let’s start with some facts about the case. The immigration charges against Mr. Rubashkin were dropped, and he was acquitted of child labor charges. No animal cruelty charges were ever brought. The accusations were made by the animal rights group PETA, which had infiltrated the plant and taken videos of purported cruelty toward animals. Inspectors from the Department of Agriculture examined the video and determined that any past violations were “not egregious” and that the plant had taken steps that put it in full compliance with humane slaughter regulations, though an earlier report had found evidence of “inhumane slaughter”.

Agriprocessors was targeted by a major immigration raid in 2008 that led to the arrest of nearly 400 undocumented Guatemalans and Mexican workers. Facing charges for employing the undocumented workers, including minors who had misrepresented their ages, Mr. Rubashkin tried to sell the company.

Federal prosecutors warned potential buyers of the plant that the government would seize the company if anyone in Rubashkin’s family retained a stake in it. That frightened buyers, and, finding himself in a $27 million deep hole, Mr. Rubashkin declared bankruptcy.

He borrowed money to save the business, but masked the company’s declining fortunes from the banks that had made loans to the company, the crime for which he was convicted. In effect, it has been charged, the prosecutors’ warnings to others are what led him to illegally conceal the extent of his company’s debt.

Mr. Rubashkin was sentenced to 27 years for that action, which constitutes bank fraud. According to one sentencing study, similar crimes at the time brought sentences in the vicinity of 10 years.

Which is why a review of Mr. Rubashkin’s case was supported by more than 30 members of Congress, from both sides of the aisle and across the political spectrum, and five former high-ranking Department of Justice officials.

It’s why Republican Senator Orrin Hatch tweeted: “This is a real Hanukkah miracle. I am proud to be a part of a large, bipartisan group of members of Congress who, along with over a hundred former senior justice officials, have been calling for Mr. Rubashkin’s release for the past eight years.”

It’s why Democratic Minority Leader Nancy Pelosi contended, “By any equitable measure, Mr. Rubashkin’s sentence is unduly harsh and does not meet the goals of our criminal justice system.” And why criminal law scholar Alan Dershowitz asserted that “I think if he weren’t a Hasidic Jew, he would not have gotten that sentence… there are other cases in this district involving non-Jews where the sentences were much lower for more serious frauds and crimes.” He called the conduct of the presiding judge, Linda Reade, “disgraceful.”

In light of such sentiments, does it really seem outrageous to any feeling person that Jews celebrated Mr. Rubashkin’s release from prison? That tears flowed at the realization that, after eight years, he could now embrace his wife and children, have Sabbath meals with them, attend shul, resume what he can of his previous life?

The celebrations were not lionizing him — though his deep faith, stoic trust and commitment to Jewish observance over his years in prison are rightly lauded. The celebrations, boiled down to their essence, were simple, sincere expressions of Jewish peoplehood.

The fact that some Jews chose to regard the rejoicing with so severely jaundiced eyes is an indictment of the larger Jewish community that’s even sadder even than Mr. Rubashkin’s missed years of family life.

Correction: An earlier version of this essay conflated two separate PETA investigations. We regret the error.