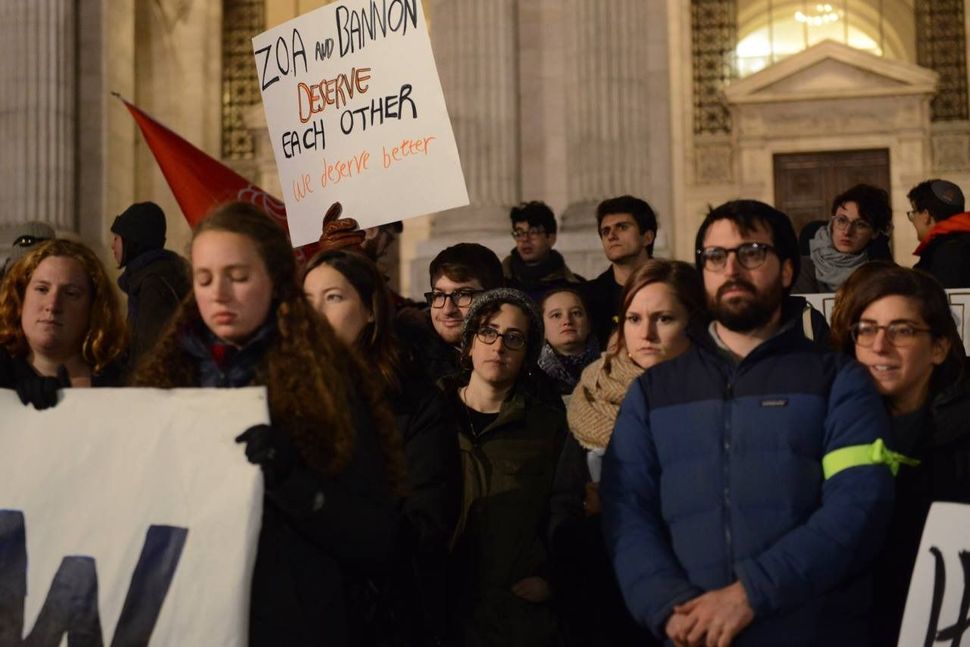 A few weeks ago in these pages, Madi Norman, a student at the University of Chicago, argued that American Jewish institutions had lost sight of what matters to young people. The American Jewish establishment is obsessed with the boycott of Israel, argued Norman, when the truth is, for young people, it’s the occupation of millions of Palestinians that is the biggest threat to Jews.

Not everyone agreed. Seffi Kogen, the Director of Campus Affairs for the American Jewish Committee, wrote a response, arguing that Norman did not speak for all young Jews.

And yet, in his response, Kogen exemplified the very problem that Norman wrote about in her op-ed, specifically, Jewish institutions claim to care about young Jews’ perspectives, but simultaneously scramble to shut out and discredit any young Jew who challenges their politics on Israel and Palestine.

While many Jewish institutions claim to speak for or to young Jews, we at IfNotNow speak as young Jews who have been pushed out of those same institutions for speaking out when they fail to live up to their values.

Ironically, Kogen, actually agreed with Norman’s claim that BDS is not the problem, writing that “Jews face far greater threats than BDS, and no one of any seriousness pretends otherwise.” (We’ll leave it to him to let Hillel International, the Conference of Presidents of Major Jewish Organizations and his own organization know.) Putting aside Kogen’s own front-and-center role in the fight against BDS, we know from experience that the “extraordinary efforts” he claims Jewish organizations “put into hearing from the Jewish community and young Jews in particular” serve rather to discredit young Jews whose opinions are at odds with the Jewish establishment.

And Kogen’s own response to Norman’s op-ed is a clear example of this shutting down of dissent.

It’s certainly true that each of us who speaks out against Israel faces pressure from our community to stay quiet and ignore the moral disaster of the occupation and the oppression of Palestinians. And yet, we do so firmly within the Jewish community, with a commitment to values we view as Jewish values, like freedom and dignity for all.

IfNotNow members already are and always will be part of the American Jewish community. We are working to build a vibrant and joyful Jewish life here, one based on the values we hold dear. Some of us learned from our families, some at our day schools, synagogues, summer camps, and campus Hillels — but we are united by our commitment to values of justice, compassion and active debate. It’s these values that drive us to call for freedom and dignity for all Israelis and Palestinians.

The question isn’t whether Jewish institutions will let us into their doors without checking our anti-occupation politics; it’s when they will get the memo that their continued support for the occupation is costing them credibility and relevance.

The question is when they will join us — not the other way around.

Kogen’s op-ed joins many other institutional voices, exposing how afraid the American Jewish establishment is of discussing the occupation. Hillel International is so afraid of critical dialogue that it has imposed standards of partnership that prohibit Jewish students from engaging publicly with supporters of BDS, be they Jewish students, Civil Rights Movement veterans, or our Palestinian peers. Jewish Federations and AIPAC are so afraid that they stay silent as neo-Nazis, anti-Semites and Islamophobes take power, when they should be standing in solidarity with American Muslim communities and opposing PM Netanyahu’s violent policies in the West Bank.

And Seffi Kogen, the American Jewish Committee’s campus organizer, is so afraid that he is rushing to discredit the ideas of a young Jewish college student who had the chutzpah to push back. All this, while claiming that Jewish institutions are making “extraordinary efforts” to listen to young Jews like her, and me.

Meanwhile, the Israeli government detains Palestinians without due process, dispossesses them of their land, homes and livelihoods, and subjects them to the daily violence and indignities of checkpoints, walls, home raids, and much more. These are clear moral wrongs, and our community is more concerned about silencing young Jews who want to talk about them than ending its own economic and political support for them.

Palestinian students and others speaking against the occupation are not a threat to Jewish college students, and it is foolish and hypocritical of Jewish institutions to slam BDS supporters with accusations of anti-Semitism while remaining silent on the appointment of racists and anti-Semites to powerful government positions.

An essential piece of our mission as IfNotNow is to show up for ourselves. That’s why we fight anti-Semitism wherever it rears its head, and why we live and work proudly as Jews. But we are tired of watching our communities squander our collective resources fighting BDS and intermarriage –- which is an insult to Jews like me from mixed families — while remaining silent on the one thing that is most toxic to young Jews: support for the brutal occupation of the Palestinian people.

Kogen calls IfNotNow’s politics “wrongheaded.” Our question — for Kogen, the AJC, and the rest of the Jewish American community — remains: Which side are you on? Are you on the side of endless occupation, or will you condemn the occupation and speak out for the freedom and dignity of all Palestinians and Israelis?

The young Jews of IfNotNow have made our choice. We’re eager for you to join us.

Imogen Page is a senior at the University of Minnesota and, like almost all members of IfNotNow, volunteers her time for the movement. She co-chairs her campus’ chapter of J Street U, is a member of the Center for Jewish Nonviolence and served as a Minnesota Hillel social action intern.