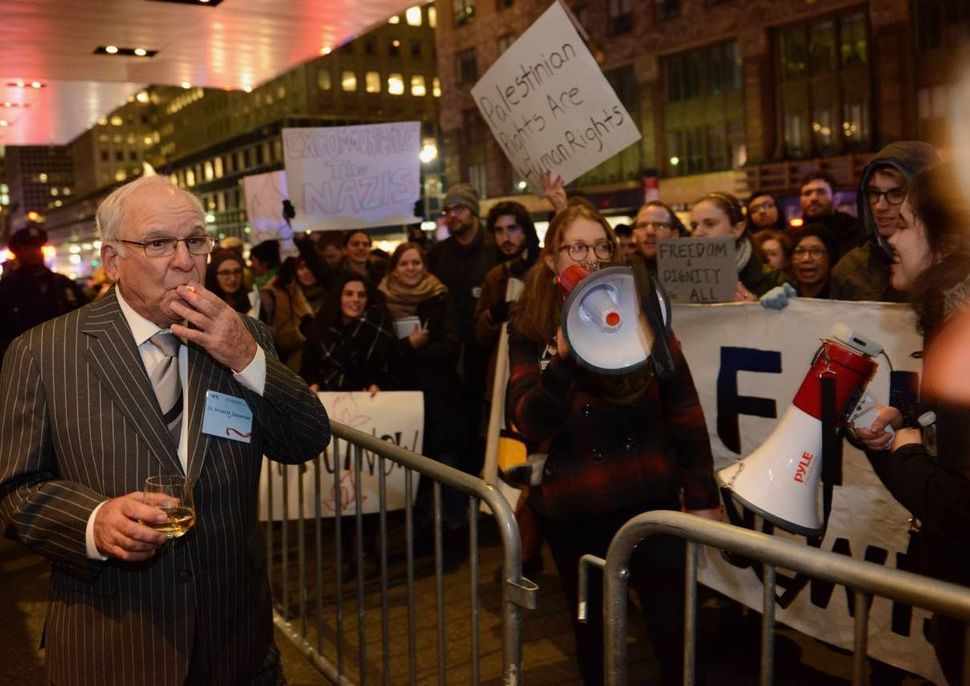 For years now, American Jewish institutions have been making a familiar argument: that Jewish students are under threat from the boycott, divest, and sanctions movement. They hold massive conferences and raise impressive sums. Even Netanyahu has joined their efforts.

But this enormous transfer of institutional resources serves a phantom threat. The idea that American Jewish students live under the violent threat of BDS is false, and Jewish students have known this for a long time.

Now, a recent Brandeis study has confirmed it. Examining students’ perceptions of anti-Semitism and hostility towards Israel at Harvard, Michigan, Brandeis, and UPenn, researchers spoke to representative samples of Jewish and non-Jewish undergraduates during the 2015-16 and 2016-17 academic years. The study found that Jewish students overwhelmingly feel safe on their campuses.

But this report doesn’t just disarm the anti-BDS campaign. It makes it clear what I and so many in my generation already know — that Jewish institutions are out of touch with the everyday experiences of Jewish college students.

Here’s our reality: it’s not BDS or criticism of Israel that threaten Jewish students on campus. Rather, it’s the Jewish community’s support for the Occupation of millions of Palestinians and their recent silence in the face of growing tide of white nationalism in the U.S.

While our community is in real danger from white nationalism and the moral crisis of the Occupation, it seems all the establishment cares about is securing unconditional support for Israel, which is eroding the moral fabric of the Jewish future.

My Judaism requires the pursuit of justice, repairing the world, and rigorous debate. Growing up, I was taught by my Jewish community that my liberation is bound up with the liberation of all oppressed people and that a just world necessitates freedom and dignity for all.

When I arrived at the University of Chicago last year, I couldn’t wait to join a vibrant and thriving Jewish community. Instead, I was horrified to learn that Hillel International, purportedly the “center for Jewish life on campus,” partners with right-wing Israel advocacy organizations like CAMERA and The David Project while cracking down on criticism of Israel and discussion of the Occupation.

Across college campuses, pro-Occupation talking points are being sold to students as authentic Judaism. Campus Jewish institutions are forcing students to make a choice between pro-Occupation Israel advocacy and the universal and Jewish values of freedom and dignity. On campuses across the country, Hillel’s Standards of Partnership have been used to bar Palestinian speakers and Jewish students critical of Israel while welcoming far-right and anti-democratic pro-Israel speakers.

While our institutions claim to be apolitical, we know better than to take this at face value: refusing to criticize Israel and remaining silent on the Occupation is choosing a side.

When Hillel International recently congratulated Trump for moving the U.S. embassy to Jerusalem despite opposition from 80 percent of American Jews, this was not apolitical, nor was it reflective of our generation’s values.

In order to engage students meaningfully, Jewish institutions need to abandon their crusade against what they wish was the biggest threat we face. They must instead grapple with the issue that we young Jews see as the biggest threat we’re facing: the reality of the Occupation and the daily nightmare for the Palestinians who live under it. Israel’s civil and human rights abuses are a moral disaster for the Israelis and American Jews who administer and support it.

I and my fellow Jewish students are no longer willing to be pawns for the Jewish establishment. The Brandeis study shows that students are done buying what our institutions are selling. The study also found that Israel and Jews are not a top concern for Jewish students, reflecting the findings of a Stanford study from earlier this year. This disengagement comes as no surprise when Jewish institutions on campus have enshrined pro-Israel advocacy as the purest form of Judaism, when any criticism of Israel is dismissed as fringe, and when any effort to distance Judaism from Israel is rebuffed.

Leaders of Jewish institutions lie awake at night, terrified for the future of the Jewish community. But the irony is that they themselves are jeopardizing our future. Our safety isn’t tied to unconditional support for Israel or its military occupation of the Palestinian people — it requires fighting the rise of white nationalism and recognizing that our community’s liberation is tied up with the liberation of the Palestinian people. When our institutions miss this, they forfeit their moral authority among young Jews.

This is a frightening moment for Jewish students. Many of us have never seen such overt anti-Semitism and white nationalism in our lifetimes. Our institutions see this, too, so they — in a misguided attempt to safeguard the Jewish community — work to shut down criticism of Israel because they cannot imagine a Judaism not deeply intertwined with support for the Jewish state.

We know that there is another path — one that doesn’t require us to sacrifice our Jewish values of justice, liberation and dignity in order to stay safe. To have a vibrant and liberated community, Jews must reckon with the Occupation.

We are yearning and will fight for institutions that represent us. Where are they?

Madi Norman is a sophomore at the University of Chicago and a member of IfNotNow Chicago.